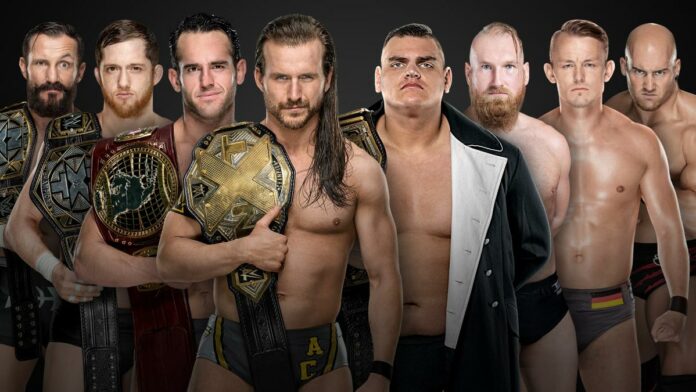 When WWE first revealed that their upcoming Worlds Collide show on January 25th would pit NXT stars against NXT UK stars, fans of the two brands involved immediately began filling their minds with several possible dream matches that could’ve viably been announced for the event. Sadly, Kona Reeves vs Jack Starz hasn’t been signed for the night at the time of writing, but there’s still time left to get that bonafide match of the century contender signed for the fans in Houston. Aside from that though, the matches that have been put together for the night have the possibility to produce one of WWE’s best-ever shows.

In order to keep with the ‘us vs them’ story of Worlds Collide, this preview will pit Last Word on Pro Wrestling’s resident NXT writer Joseph Kirkland against LWOPW’s NXT UK fanboy Adam Morrison to offer up their own unique perspectives on all of the matches that have been put together for the evening.

The NXT UK Perspective: In terms of WWE as a stand-alone promotion, there’s not much to say about the history between Mia Yim and the reigning NXT UK Women’s Champion. Kay Lee Ray. All that’s really happened between the pair so far occurred on a November episode of NXT, where ‘The Queen of Insanity’ interfered in Yim’s War Games advantage Ladder Match with Io Shirai to send Mia crashing through a ladder at ringside. When you take a look at things from a wider angle though, there are loads to talk about. On the independent circuit, Yim and Ray were part of a tandem known as Fly High WDSS, where they teamed together in both RISE Wrestling and SHIMMER Women Athletes. Although they never actually won a set of championship together, the team worked fantastically well together. Now that they’re both at much different positions in their career, the duo will undoubtedly craft together something truly special.

The NXT Perspective: This match is entirely set-up to help Kay Lee Ray in her transition to the main NXT brand. While she is still the reigning NXT UK Women’s Champion, she did debut for the main NXT brand just before War Games. She has not been featured much since, but a win over a former title challenger like Yim will definitely help her in moving up the NXT ladder. Both competitors will put on a great match, but NXT UK will pick up the win in this one.

The NXT UK Perspective: The NXT Cruiserweight Championship match is the one match on the Worlds Collide that doesn’t have a proper story coming into it, however, it’s got the potential to be a real dark horse contender for match of the night. That says a lot when you take a look at the rest of the card. Angel Garza, Isaiah “Swerve” Scott, Jordan Devlin, and Travis Banks will go to war over that championship in Houston, all four of them wanting to be WWE’s main cruiserweight representative. Scott qualified for the bout by defeating Tyler Breeze and former champ Lio Rush in a Triple Threat Match, while Devlin and Banks both had singles matches to advance forward, defeating Ligero and The Brian Kendrick respectively. All three of those matches were superb, particularly Devlin vs Ligero. If this match is anything like what those were like, then we’re looking at what could possibly go down in history as the greatest Cruiserweight Championship match of this generation.

The NXT Perspective: If DIY vs Mustache Mountain was not on this card, this is the match I would be most excited for. All four men have a spectacular reputation when it comes to their ring work, but the champion Angel Garza has been truly spectacular. Garza has been one to watch since he debuted in the NXT Breakout Tournament and has easily been the most successful of that field since debuting. I see Garza stealing the win from Isaiah Scott so they can begin a proper singles feud over the belt.

The NXT UK Perspective: The first of the huge dream matches sees Finn Balor going toe to toe with Ilja Dragunov, marking the first time these two have ever stepped in a ring together in any sort of capacity. Since returning to NXT, Balor has unleashed a much more aggressive side to him, adopting the moniker of ‘The Prince’, and dismantling anyone who stands in front of his way. He put Johnny Gargano on the shelf with a 1916 on the ramp, and then defeated Matt Riddle in a spectacular match at TakeOver: War Games III. Balor is on a phenomenal roll right now, as is Ilja Dragunov. The Russian is reeling off the back of a huge victory over Imperium‘s Alexander Wolfe in a hectic No Disqualifications Match, but now he has Gallus‘ Joe Coffey waiting for him after Worlds Collide is all said and done with, but there’s also a strong possibility that ‘The Iron God’ will show up in Houston. Not exactly the best time to be Ilja Dragunov.

The NXT Perspective: This match will do two things, further establish Balor’s more aggressive attitude and bring more eyes to Ilja Dragunov. Balor has been revitalized since his return to NXT and has shaken off any ring rust he had when he returned. Dragunov has made the most of every opportunity given to him since and I expect more of the same here. I would not be surprised if this one is the match of the night.

The NXT UK Perspective: Tag team wrestling on the NXT brand is undoubtedly one of the best things about it. Both the American division and its UK counterpart have had some terrific doubles bouts over the years, as the likes of The Revival (Scott Dawson and Dash Wilder), American Alpha (Chad Gable and Jason Jordan), and The Grizzled Young Veterans (Zack Gibson and James Drake) have produced some true epics over the years. Now though, it’s entirely possible we’ll have the biggest tag team match in NXT history as DIY face Moustache Mountain. Without any doubts, Johnny Gargano, Tommaso Ciampa, Trent Seven, and Tyler Bate will put on one of the best tag team matches under the WWE banner, and it’s a match that the Midlands lads have wanted for a while. While sitting in the crowd as DIY battled The Revival at NXT TakeOver: Brooklyn in August 2016, Seven and Bate were left dreaming of a match with either of those teams. Now that Gargano and Ciampa have reunited (for a short while, at the very least) in NXT, they can get exactly that opportunity, something that will be brilliant to watch from bell to bell.

The NXT Perspective: A dream match many fans (including myself) thought we may never get to see when Tommaso Ciampa suffered his almost career-ending neck injury. Now we will be treated to seeing two of the greatest tag teams that have competed under the NXT banner. While it would be great to see the reunited DIY walk away with the victory, I would not be surprised if Finn Balor made his way to the ring and cost Gargano the match. No matter what, these men will have one of the best matches of the night (if not the year).

The NXT UK Perspective: From late 2018 to early 2019, a battle over the NXT UK Women’s Championship saw Rhea Ripley and Toni Storm going back and forth over the championship, with ‘The Nightmare’ defeating Storm to become the inaugural champion at the end of 2018. Toni would win the title from her rival at the first NXT UK TakeOver in Blackpool the following January, with Rhea not doing too much thereafter, switching over to the NXT brand later in 2019. Since heading to the States, Rhea has shown everyone why she’s the one to watch, leading herself and Candice LeRae to victory in the first-ever women’s War Games Match and being part of the winning teams in the women’s Survivor Series Elimination Match, before then ending Shayna Baszler‘s record-breaking NXT Women’s Championship reign. ‘The Moshpit Kid’ now finds herself standing across the ring from a familiar foe, with Toni unable to recapture the NXT UK Women’s Championship from Kay Lee Ray. Perhaps she’ll have better luck challenging for the main women’s title on offer for the NXT brands.

The NXT Perspective: While the foes are quite familiar, the situations are very different. Rhea Ripley is one of the most popular and over superstars in the entire company right now. She has been on a firm rise since she made her Full Sail debut and it doesn’t appear to be slowing down anytime soon. That could come crashing to a halt at the hands of Toni Storm. Regardless of the outcome, this is just the beginning of an impressive run for Storm at Worlds Collide.

The NXT UK Perspective: Imperium has been part of gang warfare in NXT UK over the last few weeks as the Gallus trio of Joe Coffey, Mark Coffey, and Wolfgang took the fight to the European quartet, being joined in their efforts by Ilja Dragunov. Immediately after WALTER retained the NXT UK Championship over ‘The Iron God’ at TakeOver though, he and his three comrades were viciously ambushed by The Undisputed Era, which was undoubtedly one of the best ever endings to a TakeOver. It hasn’t exactly been the best week for the UE, with Roderick Strong losing his NXT North American Championship to Keith Lee, while Adam Cole took one hell of a chop courtesy of ‘The Ring General’ WALTER. It’s not often you see a man turned inside out from a knife-edge chop. Cole, Strong, Bobby Fish, and Kyle O’Reilly have perhaps bitten off a bit more than they can chew with this war against Imperium. Now that the prophecy has started to fall apart, a loss to the top unit in NXT UK would only send The Undisputed ERA on a further downward spiral following Worlds Collide.

The NXT Perspective: The Undisputed Era is the most dominant stable in NXT history period. That said, this may be the beginning, or continuation, of their downfall. Roderick Strong was the first of the group to go beltless since they fulfilled Cole’s prophecy. Imperium, particularly WALTER, has been a force on both NXT brands since they arrived. No matter what, this match should give us all a peek at what’s to come for both groups moving forward.

Stay tuned to the Last Word on Pro Wrestling for more on this and other stories from around the world of wrestling, as they develop. You can always count on LWOPW to be on top of the major news in the wrestling world, as well as to provide you with analysis, previews, videos, interviews, and editorials on the wrestling world. Be sure to catch all of the Worlds Collide action via the WWE Network.