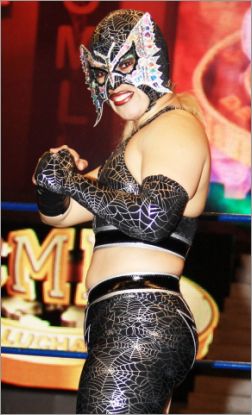 She was the former blood thirsty huntress of foreigners, she unmasked the beloved Dark Angel (Sarah Stock) and The Goddess, she was the masked face of a rising female lucha based idea in Monterrey, México: Lucha Libre Femenil (LLF), she was a prominent young luchadora in the indy circuit which lead her to be outstanding in AAA and later on, in CMLL where she main evented for the Woman´s title against long time rival Marcela and that match was mentioned as one of the best in Arena México´s history. Now she got the call to go to the Mae Young Classic hosted by WWE, a Women´s Tournament which will air between August and September on the WWE Network, and that we already have making coverage here and here.

Nice but, who is Princesa Sugehit?

Firstly, we can say without a shade of a doubt that this woman embodies the hard work, professional growing up and passion and she has made a statement of that with her career.

The astonishing Princesa Sugehit hails from Monterrey, Nuevo León, a place with big lucha tradition (Blue Demon, Rolando Vera and Humberto Garza are only three of the most popular lucha names from that city) where she started training at 15 years old. The young girl soon discovered that she was the only female on the lucha school. And one can think that only was on her benefit since she became a big rival (despite her 5 feet) for any other woman over a mat. She was trained with harsh, but very depurate technique. Sugehit was a feared ruda and when she was on LLF, she held Extreme and Juvenil Championships, alongside the Tag Team Championships with another woman that worth the time to talk about later: Polly Star.

She was under contract with AAA and while misused (nevertheless, highly praised by both luchadores and fans) she still trained and was looking for a fight. And it worked: she brawled and wrestled with some of the best luchadoras around like Faby Apache, Lady Apache and Esther and Cynthia Moreno. The cream of the crop on AAA.

Princesa Sugehit gathered lots of experience while suffering for the lack of big events, so she went to All Pro-Wrestling´s ChickFight I and II, where she won the first one, facing the likes of Candice LeRae and Nikki Roxx among others. As said above, while in LLF she unmasked Dark Angel on a wild rivalry that lead to the bet match.

By 2005 she realized that AAA offered nothing else for her and maybe should jump to the biggest place in México where she could get what she needed. And again, it worked. By 2007 while CMLL looking to crown the new Women´s Champion, Sugehit and Marcela made it to the finals offering one incredible match. Sugehit is one of the socalled “Amazonas del Consejo Mundial” (Amazones of the World Council) which is one of the most interesting renovations of a division in CMLL´s history. Amazing luchadoras like Marcela, Dalys, Amapola, Estrellita and Zeuxis alongside Princesa Sugehit have been bringing great matches and been traveling constantly to Japan solidifying the concept of Amazonas. 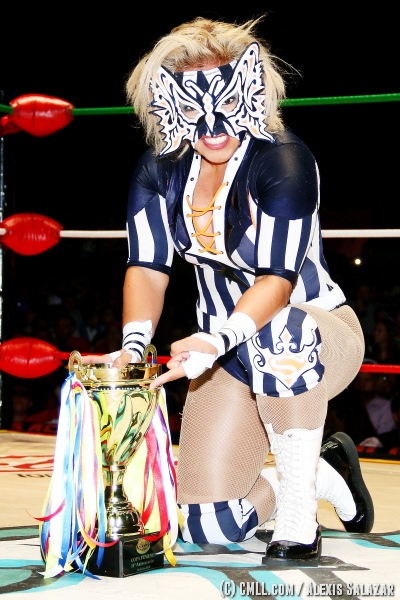 Funny thing is that Princesa has left behind her ruda years (practically since the beginning of her career in 1996) and now is one of the top técnicas on CMLL. She has been developing a rivalry against another old rival, the Puerto Rican beauty Zeuxis. Sugehit defeated her ending her two years reign as Mexican National Woman´s Champion. The plans of following the rivalry were that they will end fighting for the masks, most probably in September. But the plans over the Mae Young Classic would clash with CMLL´s, so only time will tell how this will unfold.