The Philadelphia Flyers selected left wing Joel Farabee with the 14th pick in the 2018 NHL Entry Draft. Farabee’s skillset implies that he can be a future cornerstone for this franchise. The word dangerous comes to mind when you watch Farabee play. He’s consistently around the puck looking to make things happen. Furthermore, Farabee has no fear about driving to the slot. As a player who is currently slight, that’s an important trait to possess. This is a player Flyers fans should be excited about.

It’s too early to proclaim that Joel Farabee will become a franchise cornerstone. However, it’s a realistic possibility due to his skill set and intangibles. Farabee has consistently been in a leadership role on his teams. In addition, Farabee plays in important situations. In other words, future leaders of NHL teams are built this way. As far as his skill set is concerned, he is a playmaker. That is not to say that he doesn’t shoot the puck. In fact, he’s also a high volume shooter. 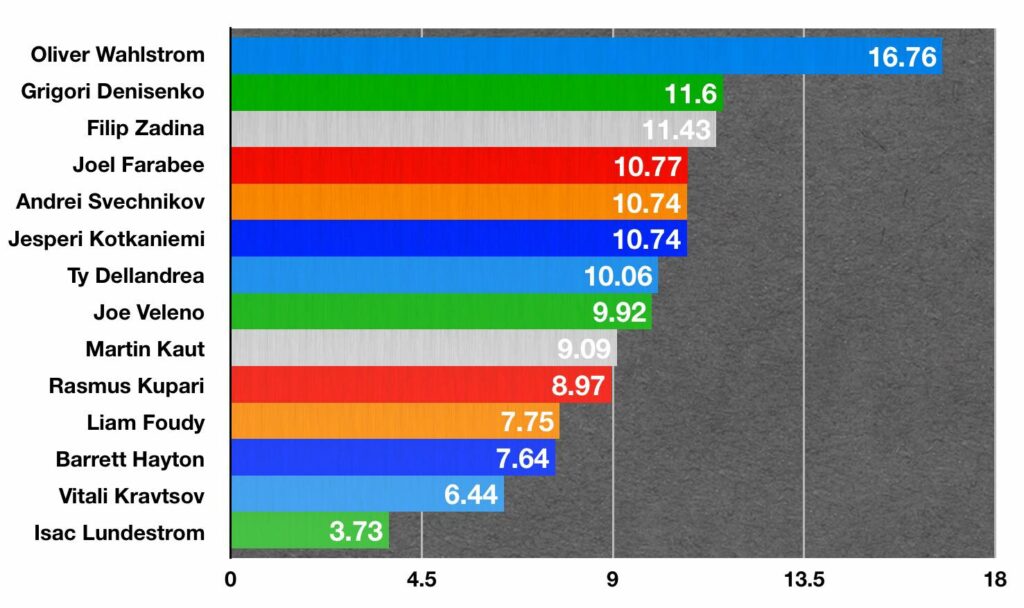 Scouching’s data shows that Farabee shoots the puck quite a bit at even-strength. Among first-round draft picks, he grades out highly in terms of shot volume. Unsurprisingly, Oliver Wahlstrom leads in this category. Farabee isn’t discerning about where he will shoot from. if no viable passing option is available, he will let it rip from anywhere in the offensive zone. As far as Philadelphia is concerned, the Flyers lack volume shooters in their pipeline. Joel Farabee (and Jay O’Brien) help fill this organizational need. Farabee’s offensive production when compared to his first round peers is also a feather in his cap. 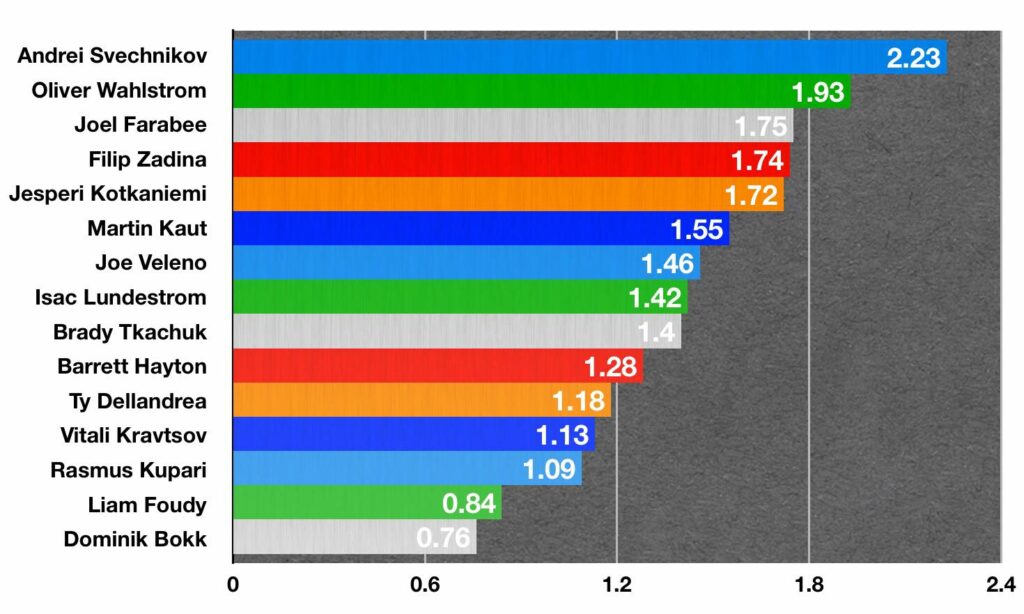 Jeremy Davis of CanucksArmy created a scoring value that is quite unique. Joel Farabee performs very well by this metric. Seeing how well he does in comparison to players chosen above him in this draft is great to see. Scoring at a high rate in a variety of game states is what you want to see out of a first-round forward. Around the midway point of the season, 2019 super prospect Jack Hughes was added to his line. Was Farabee’s offensive production from then on a result of Hughes or was it primarily the work of Farabee? 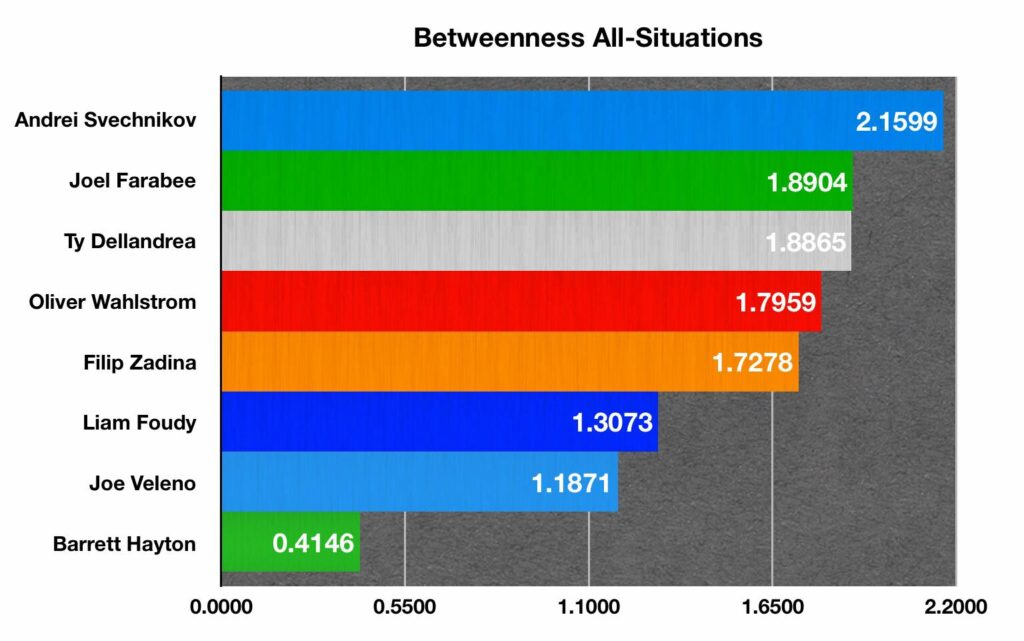 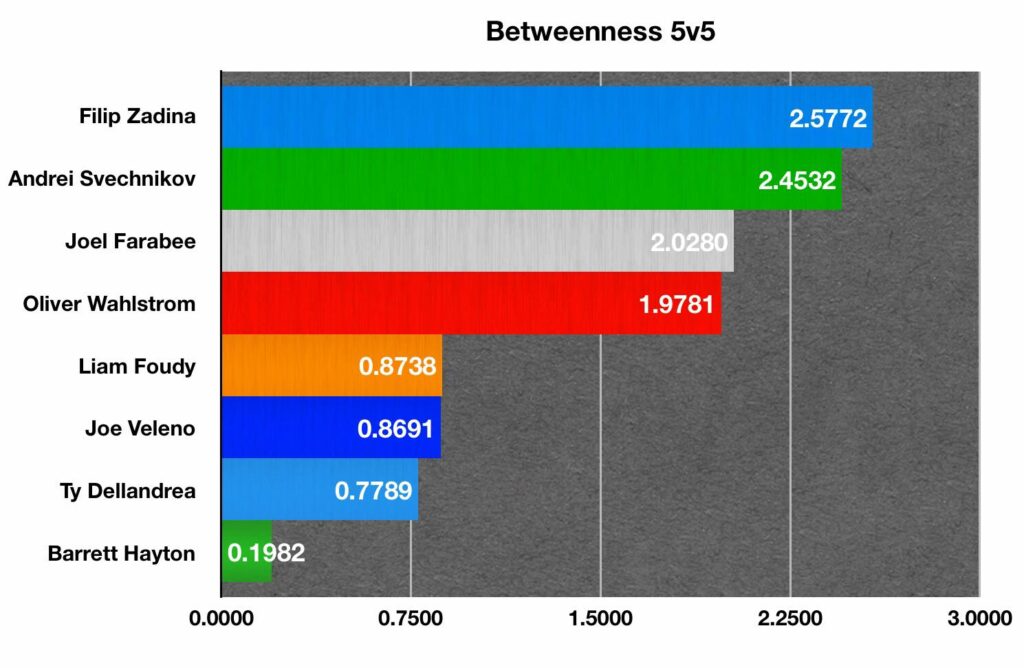 Evan Oppenheimer recently created a stat for the hockey world called Betweenness. With that in mind, let’s break it down using layman’s terms. Players who score high in Betweenness: score and assist on lots of goals, score and assist on many different player’s goals, and this player’s teammates rely on him for their scoring more so than others on the same team. Currently, Evan’s work only focuses primarily on CHL and USHL players. To that end, Farabee’s independence in scoring is very high in relation to his peers. The addition of Hughes to his line did not diminish his direct offensive contributions. Let’s now review Farabee’s defensive contributions from this past season. 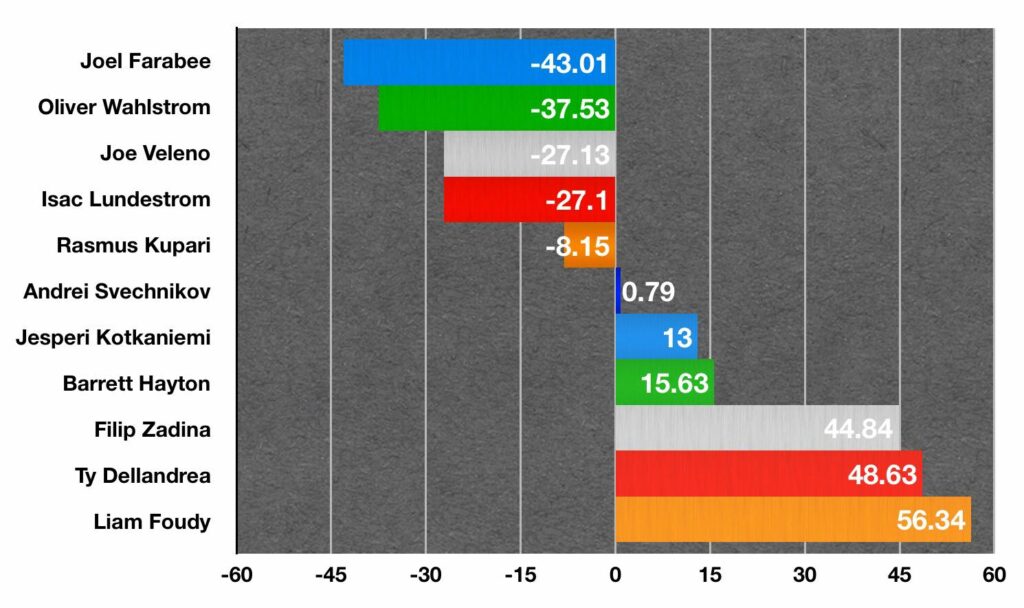 Will Scouch’s Defensive Catalyst% refers to the percentage increase in even-strength scoring against while on ice. Farabee laps the field here. He is known as a forward with strong two-way ability for good reason. There are few times when he isn’t properly positioned in the defensive zone. Farabee uses an active stick to break up play plays/cut off angles. Additionally, he’ll be physical with his check when appropriate to push play away from the defensive zone. He displays a solid understanding of his team’s defensive system. Two-way play is most certainly one of the reasons why Ron Hextall and his scouts were high on this winger and viewed him as a cornerstone of this team’s future.

The Future: Short and Long-Term

Farabee will begin playing against men for Boston University in the fall. It will be interesting to see how his game translates to the NCAA level. His high hockey IQ and speed should help him avoid the physical punishment that could come his way in the NCAA. The same can be said for when he makes the jump to the NHL. As of today, packing on muscle should be Farabee’s primary focus now. The NHL is a realistic option for him in two years if his development continues smoothly.

Main Photo: DALLAS, TX – JUNE 22: The Philadelphia Flyers draft Joel Farabee in the first round of the 2018 NHL draft on June 22, 2018, at the American Airlines Center in Dallas, Texas. (Photo by Matthew Pearce/Icon Sportswire via Getty Images)