Brandon Williams has dubbed his Manchester United teammate Harry Maguire a “top captain and top player” and claimed the defender is living out his dream of being captain of the club.

🔴 @branwilliams has backed #MUFC captain @HarryMaguire93, and says the players don't take any interest in what 'idiot' Twitter trolls have to say…@Mufc_StreamTv | @TheUnitedLink

Williams Was Full of Praise for His Manchester United Teammate

Harry Maguire has arguably failed to live up to his £80 million price tag and still holds the top spot as the world’s most expensive defender. He was awarded the captaincy by former manager Ole Gunnar Solskjaer but has since had to lend the armband to Bruno Fernandes in matches that he doesn’t start, which has become a regular occurrence under Erik ten Hag.

Harry Maguire’s Poor Form Has Been Met With Strict Consequences

In recent seasons, the 29-year-old has been a regular in the starting lineup and has been partnered most frequently with Victor Lindelof. However, United’s dismal start to the season, after conceding six goals in their opening two Premier League games, has forced Ten Hag into making changes across his team.

🌍 Final session of the week at Carrington. #MUFC pic.twitter.com/K4GGHUaBLj

Anthony Elanga also replaced the out-of-form Cristiano Ronaldo and new signing Tyrell Malacia is performing so well at left-back, that Luke Shaw cannot find a way back into the lineup.

“We don’t care about the outside world. The only thing that matters is the opinions on the inside.”

Williams also touched on the criticism players receive via social media, adding: “Who’s some little idiot sat on Twitter, going to tell you that you shouldn’t be starting a game? Who is he? I don’t get it.

“Harry is a top fella, top captain, top player. He’ll have a great career, he’s already had a great career. He’s on stepping stones and he’ll get to the top where he wants to be.

“He’s already at the top, he’s captain of Manchester United. I dream to be that one day and he’s already done it.” 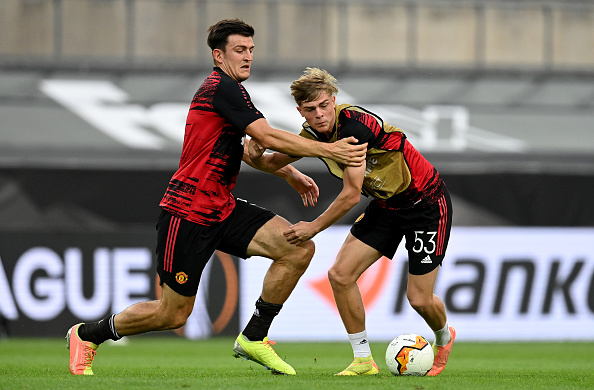 Brandon Williams: His Career So Far and Injury This Season

A back injury is currently keeping Williams out of the United squad. The Manchester-born defender joined the Red Devils’ academy in 2008 and has gone on to make 21 senior appearances for the first team.

He spent the 2021/22 campaign on loan at Norwich City and played 26 games for the club in an ultimately disappointing season that saw the Canaries relegated to the Championship. The 22-year-old then returned to his parent club in a bid to earn his place in the first team.

When fit, it’s difficult to see where the youngster could fit into the current United squad. Primarily used as a left-back, Williams faces competition from both Malacia and Shaw – two experienced and proven players.

He has also taken a stint on the right side, which is currently occupied by the in-form Diogo Dalot. Aaron Wan-Bissaka is also more comfortable on the right-hand side than Williams may be.