PHOENIX, Aug. 21 — With St. Louis Cardinals greats and future Hall of Famers Albert Pujols and Yadier Molina retiring at season’s end, the weekend of August 19 through 21 marked their last visit to Chase Field. Prior to Sunday’s game, the Arizona Diamondbacks honored the pair in a pregame ceremony. With Molina leaving the team after Friday night’s game due to a business matter in Puerto Rico, longtime teammate and friend Adam Wainwright stood in for him. 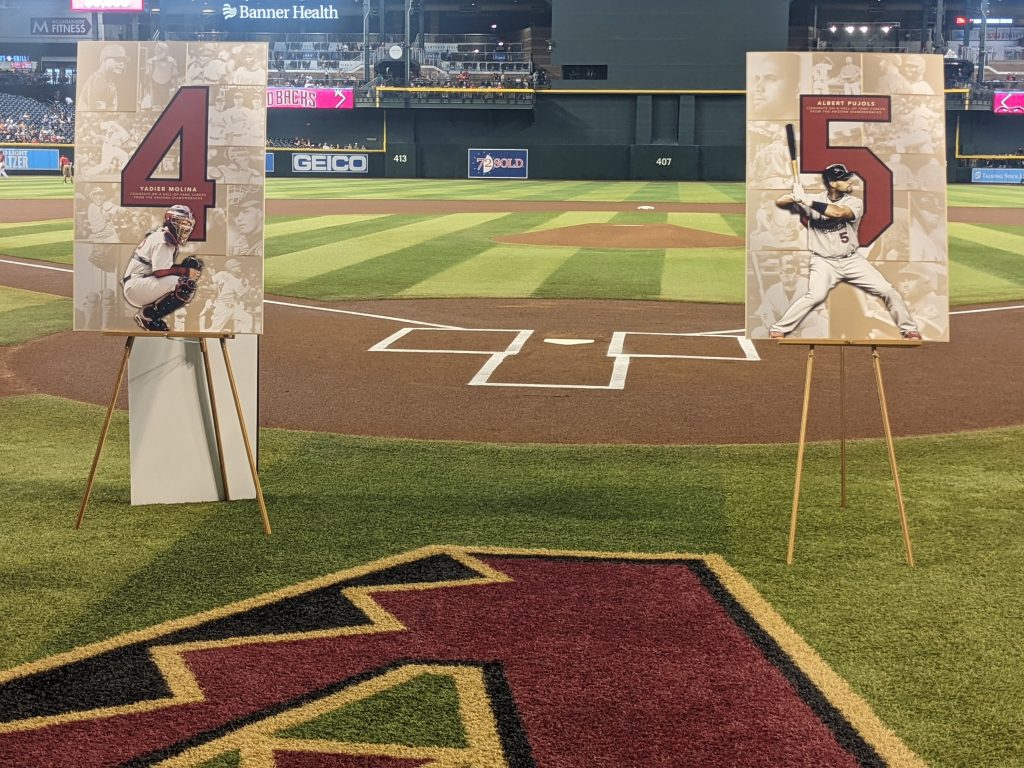 Diamondbacks pitchers Zac Gallen, Mark Melancon, and Ian Kennedy, along with first base coach Dave McKay, represented the team in the ceremony. Melancon and Kennedy, both 37, are the two eldest players on the team. Gallen began his career in the Cardinals system before being traded to the Miami Marlins prior to debuting in the majors. McKay, a coach with the Cardinals from 1996 to 2011, coached Molina and Pujols for their first eight and eleven seasons, respectively.

The Diamondbacks had a large, congratulatory portrait made for each player. It contained the player’s jersey number, in the font and color scheme found on the Cardinals’ uniforms, in the center. Inside the number, it said “<player name> congrats on a Hall-of-Fame career from the Arizona Diamondbacks.” A full-color game shot of the player was in the foreground of the bottom-center. In the background was a tan-and-white photo mosaic containing shots from various stages of the player’s career. Pujols’ portrait contained shots from his time with both the Cardinals and the Los Angeles Angels (2012–2021).

After showing a video montage of career highlights for each player, the Diamondbacks presented $10,000 checks to each player’s charity. Kennedy and McKay presented the check to the Pujols Family Foundation. This organization helps children and families in the U.S. who live with Down Syndrome as well as promoting humanitarian missions in the Dominican Republic. Gallen and Melancon presented the check to the Yadier Molina Fundación 4. This organization gives aid to children in his native Puerto Rico who are in need due to “abuse, neglect, cancer, disease, or poverty.” 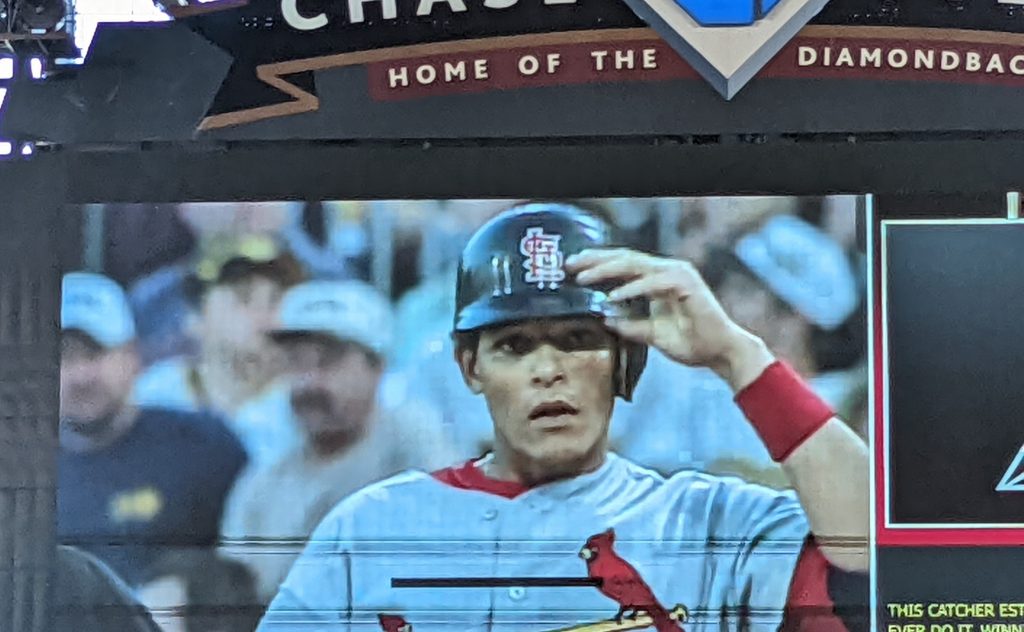 Molina, a member of the 2006 and 2011 World Series Champions, debuted in 2004 and has spent his entire career with the Cardinals. He is one of the best defensive catchers of all time, ranking second all-time in Total Zone Fielding Runs Above Average (Rtot on Baseball Reference, available for 1953 to present) and first in Defensive Runs Saved (DRS on Baseball Reference and Fangraphs, available for 2003 to present). Molina has nine Gold Gloves as a catcher, third all-time behind Ivan Rodriguez (13) and Johnny Bench (10). Furthermore, he is first all-time in putouts by a catcher and is fourth in defensive games as a catcher. 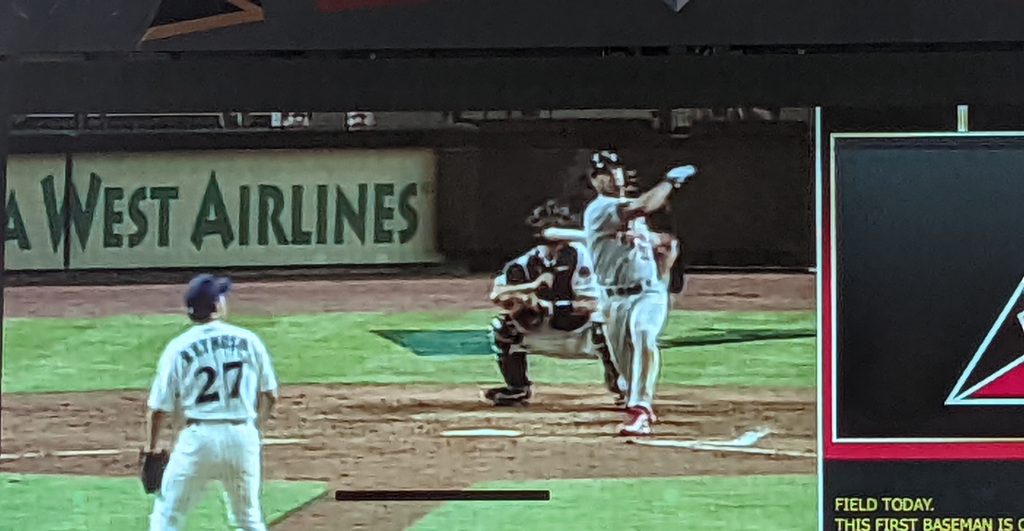 Pujols is one of the greatest hitters in major league history. On Saturday night, he went 4-for-4, including career home runs 691 and 692 (fifth all-time) while passing Stan Musial for second in career total bases. He is also 10th in hits (3,355), fifth in doubles (681), third in RBI (2,187), second in intentional walks (316), and 12th in runs scored (1,897). Pujols is also one of seven players in major league history to have both 500 home runs and 3,000 hits, both considered to be among the pinnacles of greatness in hitting.

Pujols needs five home runs to pass Alex Rodriguez for fourth all-time. If he reaches 700, he will be the fourth player to do so, joining Babe Ruth, Henry Aaron, and Barry Bonds. Both Pujols and Molina will be eligible for the Hall of Fame in 2028. Pujols is a slam-dunk candidate. While Molina is not as guaranteed as Pujols, he still will likely make it with little trouble.

PHOENIX, Aug. 21 — Members of the Arizona Diamondbacks present charity checks to Adam Wainwright and Albert Pujols, both of the St. Louis Cardinals, during a pregame ceremony honoring Pujols and the absent Yadier Molina at Chase Field. Both Pujols and Molina will retire at season’s end. Present are (L to R) Zac Gallen, Mark Melancon, Wainwright (standing in for Molina), Pujols, coach Dave McKay, and Ian Kennedy. (Photo by Evan Thompson)