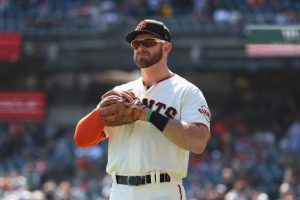 The Arizona Diamondbacks made a surprise splash in the free agent market on Friday, reportedly signing veteran third baseman Evan Longoria to a one-year deal. Jon Heyman of MLB.com first broke the news of the acquisition. Signing Longoria gives the D-Backs a much-needed veteran presence to go with their young, talented group. Evan Longoria to […] 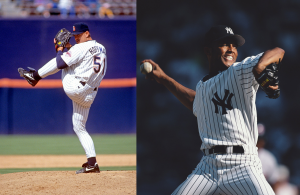 Pitching the Ninth Inning: Why the Last Three Outs Are the Toughest to Get

Why the Ninth Inning Is So Tough Although some front offices and analytics departments insist otherwise, the final three outs of a game are often the hardest to get. “There’s a big difference between the 23rd out and the 27th out,” retired pitcher Bruce Hurst said in the episode “#8: 1986 ALCS Game Five” of […] 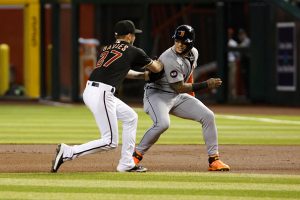 Zach Davies and Zac Gallen: Dynamic Fielding Duo in Diamondbacks Pitching Rotation The Arizona Diamondbacks have Zac Gallen has set the league on fire with his recent performance. Since August 2, he has only given up runs in two innings out of the 52 2/3 he has pitched. This has thrust him into the conversation […] 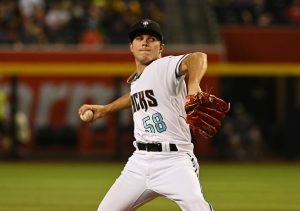 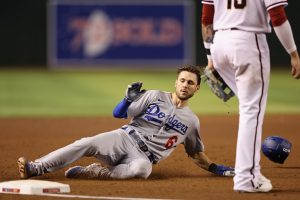 Dodgers Blank Diamondbacks, Clinch Playoffs; Magic Number for Division Down to One

Dodgers 6, Diamondbacks 0 PHOENIX, Sep 12 — Cody Bellinger went 2-for-4 with a double and two RBI, and Mookie Betts added a three-run homer to put the game away in the ninth, as the Los Angeles Dodgers blanked the Arizona Diamondbacks, 6–0, to clinch a playoff spot Monday night. (Editor’s Note: Initially, the Dodgers […] 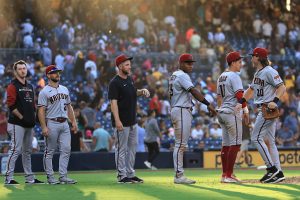 Young Diamondbacks Are Producing, and the Veterans Love It (Editor’s Note: Stats are through the end of play September 5.) The Arizona Diamondbacks, who finished 52–110 in 2021, are moving in the right direction despite having a losing record in 2022. They are 25–17 since the All-Star Break but could easily be 30–12. A big […] 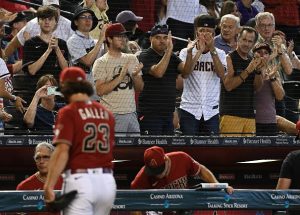 Diamondbacks 5, Brewers 1 PHOENIX, Sep. 4 — Right-hander Zac Gallen pitched seven scoreless innings, running his streak to 41 1/3 consecutive innings, as the Arizona Diamondbacks downed the Milwaukee Brewers, 5–1, Sunday afternoon. By taking three of four, the Diamondbacks won a series against the Brewers for the first time since June of 2017. […] 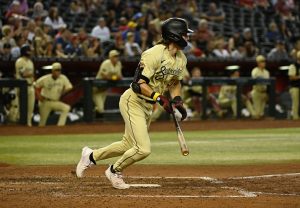 Diamondbacks 2, Brewers 1 PHOENIX, Sep. 2 — Emmanuel Rivera went 3-for-3, including the game-tying double, leading the Arizona Diamondbacks to a 2–1 win over the Milwaukee Brewers Friday night. Zach Davies and five relievers scattered nine hits through the game, stranding 11 runners as they limited the Brewers to one run. The win is […] 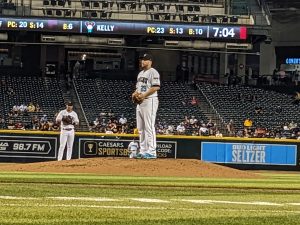 Diamondbacks 5, Brewers 0 PHOENIX, Sep. 1 — Merrill Kelly scattered four hits across seven scoreless innings, striking out seven while walking none, and Caleb Smith pitched two perfect innings of relief, striking out four of six, as the Arizona Diamondbacks blanked the Milwaukee Brewers, 5–0, Thursday night. In the victory, the tandem of Kelly […] 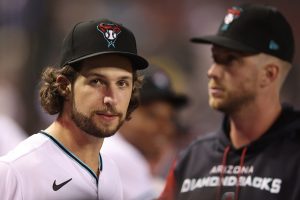 Diamondbacks 12, Phillies 3 PHOENIX, Aug. 30 — Jake McCarthy went 2-for-5 with a triple, a home run, and five RBI, notching two of his team’s 17 hits en route to a 12–3 blowout victory for the Arizona Diamondbacks over the Philadelphia Phillies Tuesday night. Alek Thomas added a career night, going 4-for-5 with two […] 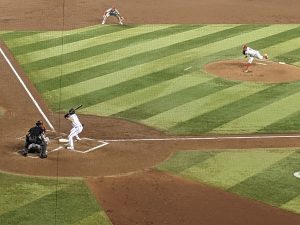 Diamondbacks 13, Phillies 7 PHOENIX, Aug. 29 — The Arizona Diamondbacks, having fallen in a 7–0 deficit, sent 22 hitters to the plate over a two-inning span en route to a 13–7 victory over the Philadelphia Phillies Monday night. Carson Kelly went 2-for-4 with four RBI, including a key three-run double to spark the comeback, […] 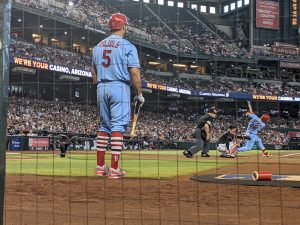 Cardinals 16, Diamondbacks 7 PHOENIX, Aug. 20 — On June 22, 1962, St. Louis Cardinals great Stan Musial broke Ty Cobb’s record for total bases in a career, tying it with a second-inning home run and breaking it with a single later in the same inning. When Musial retired at the end of the following […] 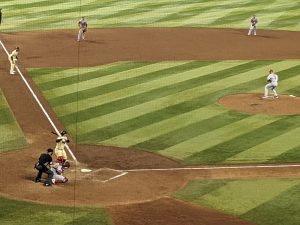 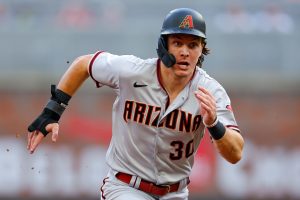 Jake McCarthy and Succeeding a Franchise Face It is never easy to succeed the face of the franchise, or an icon, or an institution. Yet it happens. Whether it be a longtime high school coach, a mainstay player, or a band director in a small town following someone who had been there longer than he’s […] 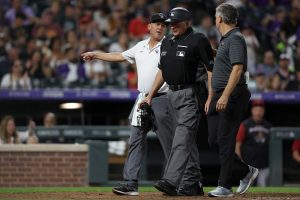 Hazards of the Job: Umpire Injury to Jerry Layne, Step by Step, as Told by Those Who Witnessed It

Hazards of the Job: Umpire Injury to Jerry Layne as Told by Those Who Witnessed It It was the bottom of the sixth inning at Coors Field in Denver on July 2. The Colorado Rockies led the Arizona Diamondbacks, 7–5. Diamondbacks right-hander J.B. Wendelken settled in to pitch to Rockies center fielder Randal Grichuk. On […] 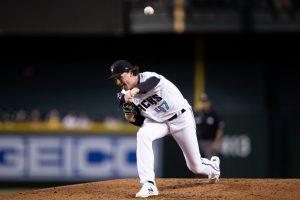 Why The Pitcher Catcher Relationship Is So Important
Jeremy Breland - Aug 10, 2022

Lewis Masella is a contributing writer for Last Word on Baseball. He graduated from SUNY Albany in 2018 after majoring in both journalism and political science. A New York native, he is a lifelong Yankees fan. Baseball is his favorite sport, but he is also a devoted fan of other NY sports teams, including the Giants, Rangers, Knicks and Syracuse basketball. Lewis's other interests include movies, TV, music, trivia and history.