The Boston Red Sox pitching staff leads the American League in FIP (3.42). One of the individuals leading the charge is Nick Pivetta, who has won eight of his nine decisions as a Red Sox starter. Since making his Sox debut last September Pivetta has put up a 3.49 ERA, a 3.26 FIP, and a .208 opponent average. His numbers in Boston are a stark contrast from what he put up in his first three and a half seasons with the Philadelphia Phillies. There he had a 5.50 ERA, a 4.64 FIP, and a .268 opponent avg. Let’s take a look at the key factors that have helped Pivetta become a key contributor in the Red Sox rotation.

In Philadelphia, Pivetta featured a five-pitch arsenal that consisted of a four-seam fastball, a curveball, a slider, a sinker, and a changeup. His four-seamer and his knuckle-curveball were his two most utilized pitches at 49.3% and 35.2%, respectively. Upon his arrival in Boston Pivetta dropped the sinker from his repertoire and made his slider his secondary pitch, replacing the knuckle curve. This change in usage helps to explain the next point.

His usage of the four-seamer has gone up above 50% (51.9%). In looking at the numbers, there’s no real velocity change between what he’s throwing now and what he was throwing in Philadelphia. The whiff% is pretty much the same, but for some reason, his fastball has induced his lowest hard hit% of his career (31.6%) his xBA is by far his lowest (.199), and he has yet to give up a homer on a fastball this year (he gave up 44 in the past four seasons combined).

So what, if anything, has changed? The short answer is location. Pivetta has done a much better job of keeping his fastball up in the zone instead of it falling into the middle of the zone–as it did in previous years. Take a look at his fastball location in 2021 compared to his last full season in 2019. 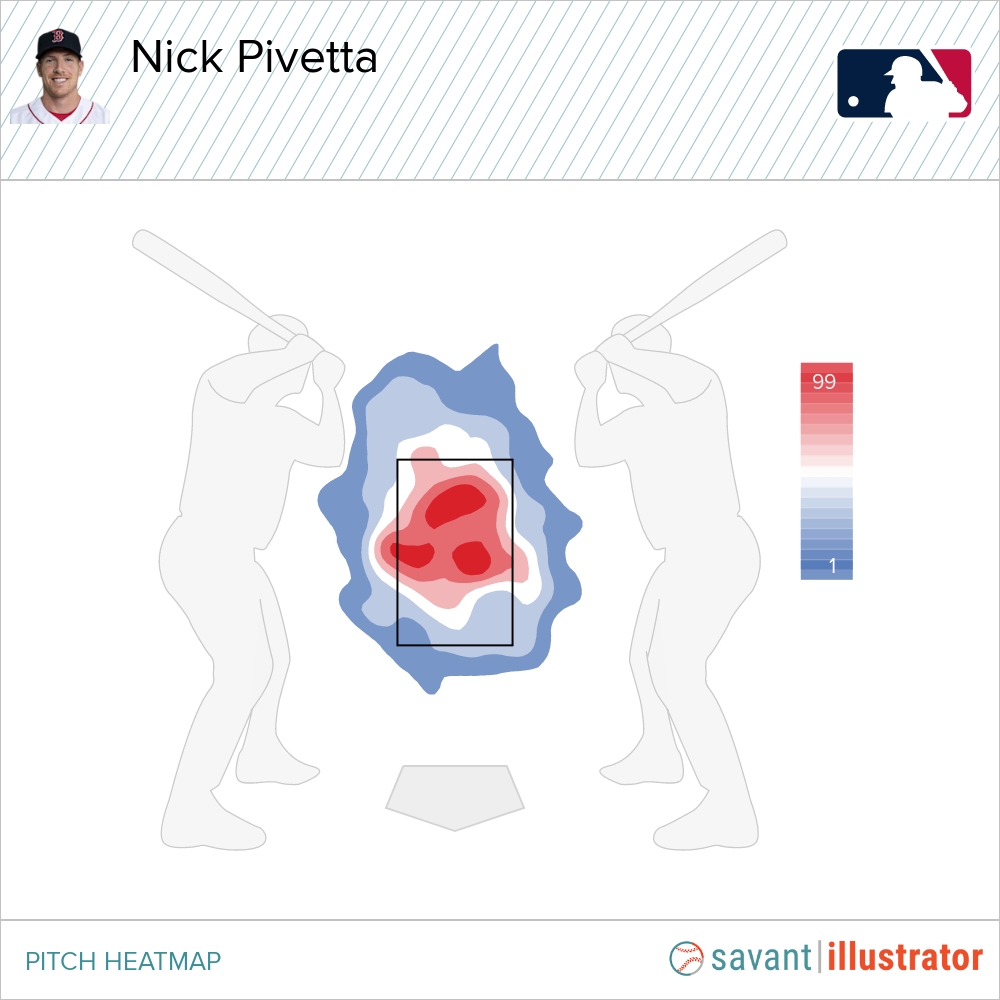 As a result, his slider and knuckle-curve have become more effective because they both work downward in the zone. The slider and curve are both his most successful putaway pitches at 19.8% and 20.2%, respectively. There is about a 10 mph difference between his fastball and slider, and Pivetta has done a better job of burying his slider down in the zone, or below it to his glove side. In turn, it changes the eye level of the batter.

While the home of the Red Sox is historically considered a hitter-friendly park, it has been one of the lowest-graded parks in terms of home run average in recent years. During this season, Fenway has a home run factor of 72 for right-handed batters and 80 for lefties, according to Statcast. That puts Fenway Park lower-than-average when it comes to home run rate for 2021.

This season’s remarkably low rate is not out of the ordinary though for Fenway. In 2014, Fenway’s home run park factor was 73. That year, Red Sox starters allowed 1.01 HR/9. Let’s go in even further and take a look at the xHR metric. This is a metric based on batted ball data (launch angle, exit velocity, and direction) and it projects whether or not a batted ball would be a home run in each of the 30 ballparks in the major leagues, and averages the results to calculate the expected number of home runs allowed. So far this season he has given up five total home runs. Pivetta’s 6.7 xHR means that batted ball events against his pitching would result in an average of 6.7 home runs. This means that he has been on the good side of luck, but it is also thanks to his home park.

In Philly, that ball is a souvenir. No one else on the pitching staff has benefitted from Fenway Park more than Pivetta. He is on pace for a career-low HR/9 rate (0.70). At home, he’s at 0.74. This is worlds away from his home run rates during his tenure in Philly. In his career at Citizen’s Bank Park, his HR/9 rate was a whopping 1.96.

It should be noted too, that the new baseball has had quite the impact on home run rates. At Fenway, the HR/FB rate has dropped from 16.6% last season to 12.3% this year. That is below the league rate of 13.3%. Fly balls at Fenway are definitely being impacted more than anywhere else in baseball. Interestingly enough, these new baseballs seem to be affecting right-handers the most, and if you know anything about Fenway, you know that it usually tougher on lefty hitters. There’s no doubt that this has helped Pivetta. His current 6.9 HR/FB is far and away, the best rate of his career. Prior to this season, his lowest rate was 15.8% in 2018.

In short, with a change in pitch variation, a new environment, and the increased drag of the new baseball having a greater effect on the home-run rate in Fenway, Nick Pivetta has definitely made the most of his new opportunity. The question is: can Pivetta (and the rest of the pitching staff, for that matter) continue to prosper off of this newfound home-field advantage?

Mackey Sasser and “The Yips”
Angels Winning Any Way They Can