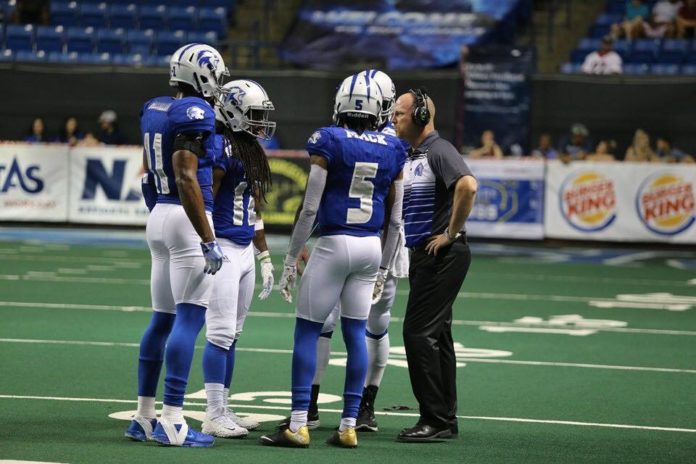 Following the announcement of Kicker Brandon Behr earning the LWOS National Arena League (NAL) Special Teams Player of the Year and Most Improved Player, we are continuing the LWOS awards with the Offensive Rookie of the Year. Many rookies made a name for themselves this season, but one stands out the most, which is Columbus Lions Wide Receiver Paris Mack.

The Columbus Lions have by far the most depth to their receiving core, having Mack, Bones Bagaunte, Chris Sanders-McCollom, Tristan Purifoy, Desmond Reese, and DeAndre Brown. Even with all of these receivers, Mack still amassed 871 yards and 14 touchdowns on 50 receptions.

This award is a toss-up between Mack and Sanders-McCollom, as both receivers have almost the same amount of touchdowns. Sanders-McCollom is shy of Mack by just over 200 yards but has three more touchdowns than Mack.

Mack played in 10 of the 14 regular-season games for Columbus and really stood out. Even though the Lions record is below a winning record, Mack still stepped up his game and showed the Lions and the league that he was capable of being a team player throughout the season. Unfortunately, for Mack, he suffered an injury toward the end of the season, which would ding his stats a little bit due to missed games.

Bouncing back in the playoffs, Mack continued right where he left off and filled in the gap that was once there with the receivers. This is what ultimately made him earn this award. These stats are impressive in the NAL, as only 15 receivers have ever hit 800 receiving yards in a single season. With Mack being a rookie, the Lions have something to look forward to for a very long time, as long as Mack is willing to play under Coach Jason Gibson and the Lions.

The LWOS Facebook, Instagram, and Twitter are the best places to go for our NAL awards. Up next, we will announce the Defensive Rookie of the Year.