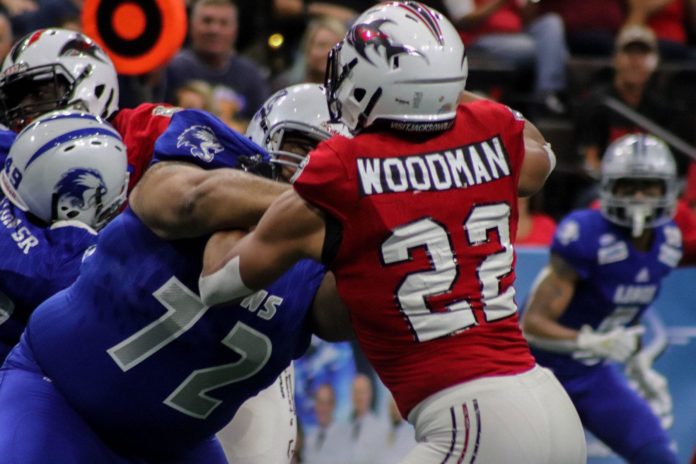 This season, Woodman entered his second year of arena football, but his first in the NAL. This technically makes him eligible for a rookie award. Last season, playing up in New Jersey, Woodman helped the Jersey Flight of the American Arena League (AAL) to a 5-3 record.

This season, Woodman decided to head down south to play for a team that has played for 10 seasons. In a thriving NAL season, Woodman was able to finish first place in many categories. He tied the record for the most forced fumbles in a season (4), finished the season in first place with 15 tackles for a loss, and had a sizable lead for the most sacks in 2019 (12.5). Woodman was also tied for 12th place in the league in tackles (39). Woodman’s height at 6’5″ helped him bat-down seven passes at the line of scrimmage, which also leads the league for defensive linemen.

Woodman and the Sharks D-Line had big shoes to fill in the beginning of the season with Defensive Lineman Damien Jacobs having a foot injury from Week One all the way to Week 16. While Jacobs played shortly after Week One, he still sat out for multiple weeks. Woodman took the opportunity and ran with it, having an incredible season.

Up next, we will announce our NAL Head Coach of the Year. A link to that will be posted on the LWOS Facebook, Instagram, and Twitter pages. You won’t want to miss the excitement that is to come.