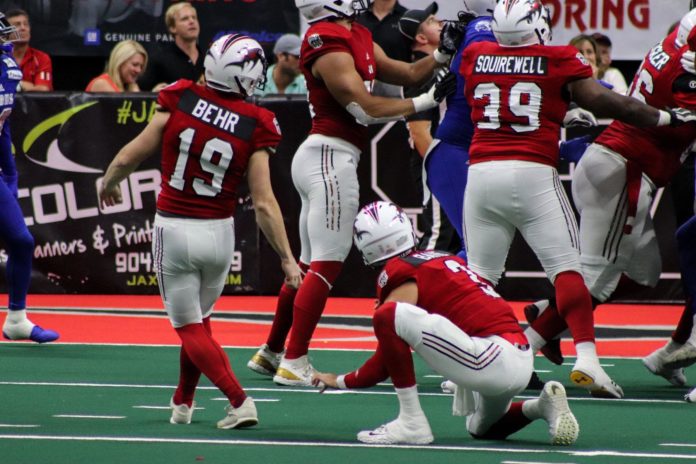 Behr returned to the Sharks for his second season of arena football this year. In 2017, Behr had a solid season, making 40-of-52 PAT’s, 6-of-13 FG’s, and two deuces. During the off-season, Behr stepped up his game and was determined to bounce back and better than before. Following the 76.92% PAT performance, Behr bounced back in 2019. He was 94-of-107 (87.85%) on PAT’s, 1-of-6 (16.67%) on FG’s, and an impressive 23 deuces, which is a whole 21 more than the previous year. Not only did Behr do all of that, but he has also converted on three of the five attempted onside kicks, which is the most of any team this season and is the highest percentage.

Behr led the league in the most PAT attempts (107), most PAT’s made (94), and the most deuces (23). In total, Behr has scored 143 points, which ranks first in Special Teams this season and ninth among all NAL players this season.

One season of multiple kickers on a team could get to a player and then it would carry over to the next season. Not for Behr, as he completely dominated the league and has almost broken the single-game deuce record in multiple games this season. Going from a season of squib kicks to all deuces is a tough thing to do, but Behr mastered the deuce in 2019. Only time will tell if he will be able to pick up where he left off for the 2020 season next year.

Facebook, Instagram, and Twitter is the best spot to get updates on the LWOS NAL Awards in the upcoming days. Up next, we will reveal who the winner of our Offensive Rookie of the Year is.