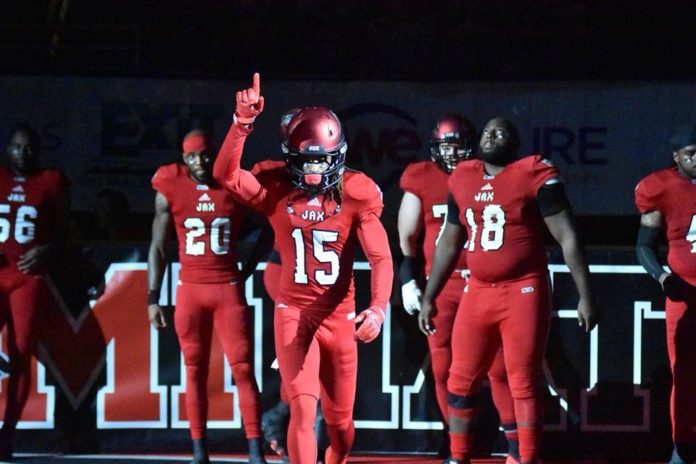 With the Last Word on Sports (LWOS) National Arena League (NAL) Awards picking up, we are announcing Jacksonville Sharks Defensive Back Seth Ellis as the LWOS Defensive Player of the Year. Ellis entered his second arena season with the Albany Empire of the Arena Football League (AFL). Ellis not making the roster meant he was able to return to Jacksonville, where he played the previous season.

While this may seem biased for some, having a Sharks Wide Receiver as the LWOS NAL MVP and having Ellis as our Defensive Player of the Year, there is always a reasoning behind the decision.

Ellis, this season, has been targeted 130 times. Of those 130 times, only 47 attempts have been successful for 585 yards, 17 touchdowns, and 13 interceptions. Doing the math on how to find a quarterback rating, that is a QBR of 50.96. That number is super low, especially since it’s possible to throw for over half of those yards in a single game.

The record for the most interceptions in a single season is 13, which is currently held by Ellis. The record was 12 by Kiante Northington. Last year, the Pirates played 15 games; this year, Ellis played only 13 and had those impressive numbers.

While Ellis didn’t have many tackles, pass breakups, or forced fumbles, those don’t get remembered quite like interceptions and pick-sixes are remembered. Ellis had 13 interceptions for 99 yards and one touchdown. His lone touchdown was on a 40-yard return, which is super rare in arena football when the field is very narrow and there are 15 other people to dodge (even though 7 of which are teammates).

LWOS Facebook, Instagram, and Twitter pages are the best places to get information on any news in all kinds of arena and indoor leagues. Up next, we will release who will be the winner of our Special Teams Player of the Year.