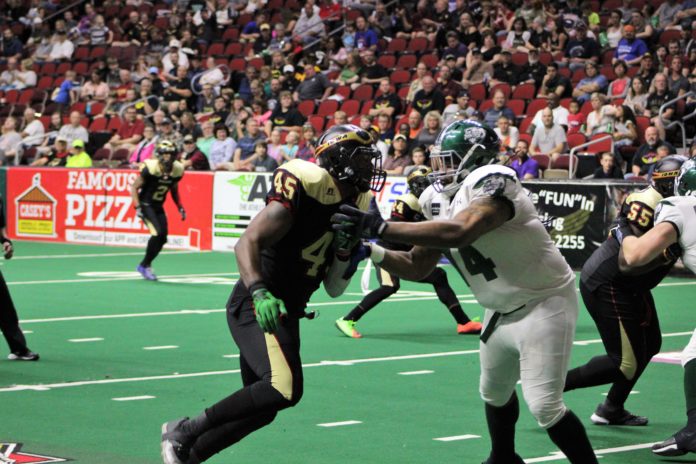 The Green Bay Blizzard lost in what should’ve been their victory last night, but poor decision-making stopped them from taking home the victory in Cedar Rapids against the Titans on March 2, 2018. This loss moves the Green Bay Blizzard down to 0-2, which is currently the worst record in the league so far this year.

Why the Green Bay Blizzard are 0-2

The Blizzard aren’t what 0-2 looks like. Obviously they’ve lost both games that they have played, but they have been playing some decent football.

In week one, the Blizzard were making things interesting against the Iowa Barnstormers, a team which finished the season 13-3.

The score after the first quarter was 10-7 in Green Bay’s favor. However, during halftime, the score went to 13-20 with Iowa on top. This isn’t quite where things started to slip out of Green Bay’s hands, as they kept it a game in the third quarter.

Not a single point was scored in the third quarter, keeping the score at 13-20. A seven point game is almost nothing in the IFL. Scoring is very common, but not too common in this particular game.

In week two, the Blizzard traveled to Cedar Rapids, hoping to get their first win against the Titans, who finished 1-15.

The first quarter wasn’t what Green Bay expected, quickly going down 3-13. Again, a seven or 10 point game in the IFL isn’t much, so there’s no room to breathe for the team who is leading. The Blizzard came back in the second quarter to tie the game up at 26. Green Bay scored 23 points and allowed 13 points in the second quarter. A tie game at halftime and getting the ball back first in the second half is a recipe to success in the indoor league.

Green Bay managed to keep the game within one point at the end of the third quarter, with the score being 39-40 with Cedar Rapids on top. The Blizzard defense did exactly what they needed to do in order to win this game, but their offense blew it, especially in the final few minutes of the game.

The Blizzard defense only allowed seven points in the final quarter. All their offense had to do was score a touchdown and go for two points. If the two points wouldn’t work out, then it would be time to try an onside kick.

The Blizzard were driving down the field on their final possession, but failed co convert on fourth down. Quarterback Christian Lemay and his receiver were not on the right page. Lemay overthrew his receiver by at least five yards and the ball went out of bounds.

The defense did everything they possibly could do to win the game in the fourth quarter. Their offense didn’t take advantage of only allowing the other team to score seven points. Indoor football teams normally score more than seven points in a quarter. Most of the blame can go on their defense earlier in the game. When it’s a close game like that the entire game, the blame shifts back to the offense.

With this costly fourth down mistake, the Blizzard would lose a game that should’ve been theirs to win.

Breaking Down the Numbers

When looking at each quarter, the Blizzard’s margin of scoring is -7 for the first quarter, zero for the second quarter, -1 for the third quarter, and -21 in the fourth quarter.

Those margins aren’t entirely too bad, but when three quarters of your game is a negative margin and the other quarter is a wash, that is a recipe for disaster.

The Blizzard can’t possibly win games when they are going negative for the majority of their games. If they do, that other quarter better be the best quarter that they have played in their lives.

It’s all about consistency with football. The Blizzard look like they take it easy one quarter, then go at it the other quarter. By the time they are giving it their all, they are either giving the ball up, or it’s already too late.