It is Friday! That means the WWE‘s blue-branded sports entertainment (are we still sports entertainment in the post-Vince McMahon era?) extravaganza, Friday Night SmackDown, has arrived once more. Additionally, tonight’s episode of SmackDown is the go-home edition ahead of tomorrow night’s WWE SummerSlam 2022 event. Hasn’t that come around fast? Without further ado, let’s jump into the first SmackDown Preview of the Triple H era of SmackDown – one which will be headlined by Sheamus and Drew McIntyre.

Lacey Evans. For months, she was being rehabilitated as a triumphant, ex-military babyface with the potential to be the face of the SmackDown women’s division. Then she was randomly moved from SmackDown to Raw; then she was a heel, and then she wasn’t; then she was moved back to SmackDown and now she is most definitely a heel after having tormented poor Aliyah in recent weeks. Here’s hoping the Triple H era of creative brings about a solid direction for Evans. Anyway, tonight, Lacey Evans and Aliyah are set to clash. 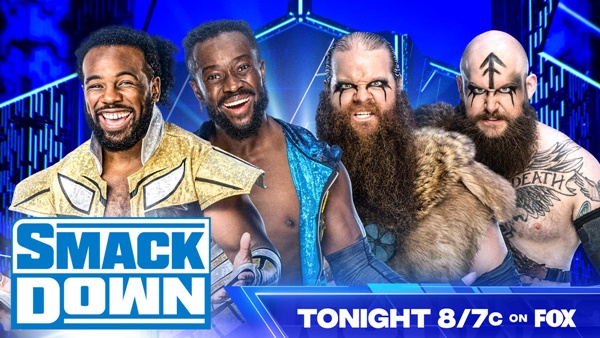 Tonight’s SmackDown will also bear witness to the New Day (Kofi Kingston & Xavier Woods) taking on the newly vicious Viking Raiders. It is now little over a month since the Viking Raiders adopted meaner personas; turning heel and immediately entering into a feud with the multi-time tag team champions of Kofi Kingston and Xavier Woods. Tonight, these two teams will collide once more and the New Day are going to need a little bit more than the “power of positivity” to overcome this pillaging.

Tonight’s episode of SmackDown sees the first ever “Donnybrook” match between Sheamus and Drew McIntyre. For those unaware, Donnybrook is a district of Dublin – the capital city of the Republic of Ireland which is, of course, the home-country of Sheamus. What do the rules of the match entail, one might ask. All that we know is that it’s a no-disqualification match that will likely feature the use of “Irish weapons”, such as a Shillelagh. So all weapons are probably permitted. If you wanted to see Sheamus get chopped down by McIntyre’s ancestral sword, Angela, though, you’ll perhaps be disappointed to learn that the sword is prohibited and banned from the match. Should the match go ahead, you can at least be sure that these two will be able to put on a very entertaining brawl of a match, given their chemistry in the ring.

– Brock Lesnar and Roman Reigns are set to main event SummerSlam tomorrow night. Expect one final confrontation between the two behemoths ahead of their bout.

– Maximum Male Models is now ran by Max Dupri‘s sister, Maxxine Dupri (the former Sofia Cromwell of NXT fame). Apparently, some beachwear is getting debuted tonight, so that could be cool. It is worth noting that Max Dupri (the former LA Knight) was written out of the group last Friday, when Vince McMahon was still head of creative. Might we see him rejoin the group tonight? Tune in to find out.