This Sunday evening, live from Evansville Coliseum, The Rock ‘n’ Roll Express wrestle their final match within the famed venue. Ricky Morton and Robert Gibson make up one of the most celebrated tag teams in wrestling history, having worked across multiple decades. The fact that they continue to wrestle now, when many of their contemporaries have long since hanged up their boots, can’t be overlooked. Game Changer Wrestling is set to honor said famed tag team with GCW Rock-N-Roll Forever. Here’s what to know about what promises to be a must-see event for fans of wrestling across several eras. 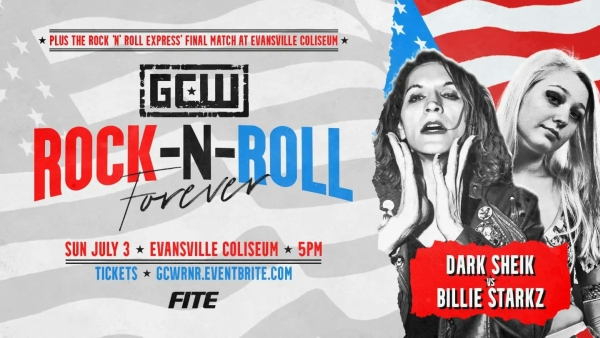 In one of the preliminary matches of GCW Rock-N-Roll Forever, Dark Sheik takes on Billie Starkz in a first-time singles bout. This isn’t to say that this is their first time sharing a wrestling ring, however. They took part in 2 battle royal matches in GCW and, this past May, were part of a three-way bout for West Coast Pro Wrestling. However, up until now, Sheik and Starkz have yet to wrestle one-on-one. The competitors in question are among the most popular on the independent scene, though their styles are different from one another. However, going into this match, what will be the most undeniable aspect is the experience gap.

Having started wrestling in the early aughts, Dark Sheik boasts over two decades of wrestling experience. Since first stepping into a ring, “The High Priestess” amassed success in such indie organizations as Devil Mountain Wrestling and Hoodslam, the latter of which is owned by the wrestler in question. Furthermore, Sheik remains a consistent performer in not only GCW but one of its sibling promotions, LA Fights. Meanwhile, Starkz has only been wrestling since 2018, though she’s been proving herself across multiple organizations as well. Currently, the one known as “Space Jesus” is a titleholder for 2econd Wrestling and Girl Fight Wrestling. It’ll be difficult to determine a winner, but this will be a match to keep an eye on this Sunday all the same. 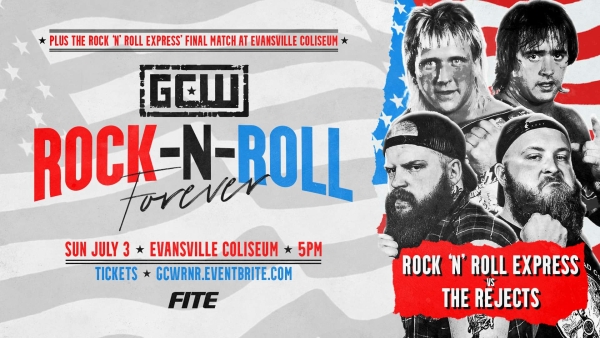 Once More at Evansville Coliseum

In the marquee match of GCW Rock-N-Roll Forever, the legendary Rock ‘n’ Roll Express wrestle their final Evansville Coliseum match. The accolades this team amassed across roughly four decades are difficult to match. Two United States Wrestling Association tag team titles, 10 Smoky Mountain Wrestling tag team titles, and 8 National Wrestling Alliance world tag team titles are just a few landmark achievements Ricky Morton and Robert Gibson earned as a tandem. Furthermore, they’ve worked with a number of notable teams across said decades. Whether they’ve clashed with Ole and Arn Anderson in the 1980s, Bobby Eaton and Stan Lane in the 1990s, or most recently, FTR earlier this year, they’ve shared the ring with many of the best.

This Sunday, for GCW Rock-N-Roll Forever, The Rock ‘n’ Roll Express step into Evansville Coliseum one last time. There is considerable history that the team has with the venue in question, their tag team battles there dating back to the 1980s. Case and point, on February 2, 1988, Morton and Gibson unsuccessfully challenged then-AWA Tag Team Champions The Midnight Rockers – Marty Jannetty and Shawn Michaels – for Continental Wrestling Association. They’ve also worked World Wrestling Alliance events and even a World Wrestling Federation show for the venue in the years that follow. However, their final challenge in the Coliseum may be their most vicious.

Enter John Wayne Murdoch and Reed Bentley, collectively known as The Rejects. While their resume may not be as extensive as their opponents’ for this Sunday, Murdoch and Bentley have accomplished much as a team. From tag team title victories in various organizations, GCW included, to dominance in deathmatch scenarios, The Rejects are as every bit ruthless as they appear. In fact, despite the celebratory nature surrounding this event, it’s fair to assume that they’re not going to be in the mood to celebrate. Moreover, they will have one goal on their minds: total destruction. Will they pick up the win, silencing the sound of rock ‘n’ roll in the process? Tune into the show this Sunday to find out.

Stay tuned to the Last Word on Pro Wrestling for more on this and other stories from around the world of wrestling, as they develop. You can always count on LWOPW to be on top of the major news in the wrestling world, as well as to provide you with analysis, previews, videos, interviews, and editorials on the wrestling world. GCW Rock-N-Roll Forever is set to air Sunday at 5 PM EDT on FITE. Tickets are also available via Eventbrite.