It is Friday once more! Of course, this means the WWE brings Friday Night SmackDown to our screens for yet another episode of blue branded professional sports wrestling entertainment. We have just the one match announced in advance this week (there was set to be a match between Sheamus & Ridge Holland and the New Day, but this appears to be cancelled for reasons unexplained), so there will be some speculation in this preview as to what else we might expect on the WrestleMania Backlash go-home edition of SmackDown. Let’s dive right in! 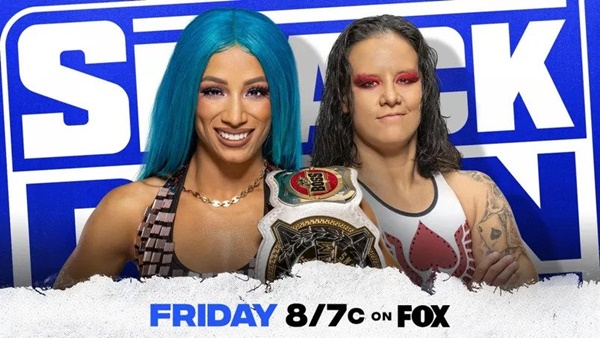 In what has all the potential in the world of being a show-stealing bout between two former NXT Women’s Champions, one-half of the WWE Women’s Tag Team Champions, Sasha Banks, takes on Shayna Baszler. On next week’s SmackDown, Banks and partner Naomi will attempt to defend their championships against Baszler and Natalya, so this is a preview of what is to come. Again, this should be a really good match if given the time it needs to fulfill its potential. However, does it not feel somewhat odd that there is this big pay-per-view this weekend and yet the belts are set to be defended on the SmackDown following the PPV? It is time for the Women’s Tag Team Championships to be defended on PPV. Anyway, enjoy SmackDown!

– Cody Rhodes and Seth Rollins are both scheduled to appear on SmackDown tonight. Just end the brand split already, WWE. You’re not fooling anyone.

– Members of The Bloodline (Roman Reigns & The Usos) will continue their respective feuds with Team RK-Bro (Randy Orton & Riddle) and Drew McIntyre. All involved are scheduled for tonight’s show.