The Ruleta de la Muerte tournament is one of the most unique in all of wrestling. The most important part to know about this tournament is that the end goal will be a luchador losing their signature mask. Ruleta de la Muerte is all about the losers more so than the winners, as those who win remove themselves from the tournament while the losers continue on until someone is unmasked. The eight luchadors who will be featured are Ultimo Dragon, Pentagon Jr., LA Park, Villano IV, Blue Demon Jr., Rayo De Jalisco Jr., El Canek, and Psycho Clown. One of these eight stars will be unmasked by the end, adding an overall intrigue as the finals of this tournament very well could be the main event of TripleMania XXX: Mexico City, depending on how things turn out.

The opening round kicks off here as Ultimo Dragon faces Pentagon Jr., LA Park and Villano IV go head-to-head, Blue Demon Jr. and Rayo De Jalisco Jr. battle, and the oldest man in the tournament, El Canek, faces one of AAA’s current top stars, Psycho Clown. Nothing is for certain in this tournament but it should be one to watch for all wrestling fans as a legendary luchador will be losing their match by the end of it. Let Ruleta de la Muerte begin! 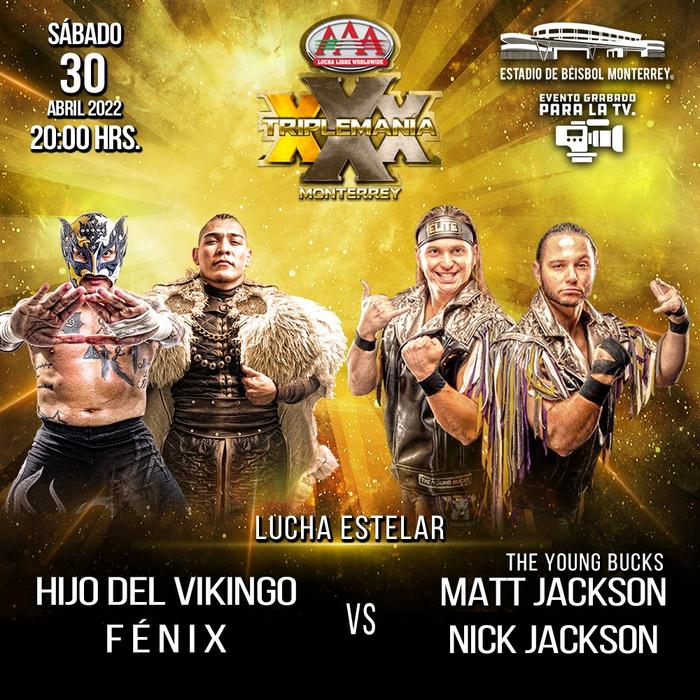 Welp… get ready to watch something amazing. It’s really the best way to describe the main event of TripleMania XXX: Monterrey. Two of the best in the world team as AAA Mega Champion El Hijo del Vikingo pairs up with Fenix to take on The Young Bucks. There’s not much to write home about in this one other than it’s going to be special. Nick Jackson is somehow the third most insane individual in this match when it comes to what he’s willing to put his body through to win. If you’ve never witnessed a Vikingo match, you’re in for a treat. Vikingo is pound-for-pound one of the best but maybe the most exciting. What he’s able to do with his body as he flies through the air defies gravity. Fenix will be the interesting one to watch seeing this is his first official match back since suffering his injury.