All Japan Pro Wrestling (AJPW) returns with its highly-anticipated Champion Carnival round-robin tournament. Often one of the highlights of AJPW’s year, the 2022 field looks like the best in a long time. It is weird to see someone like Zeus no longer part of the tournament but they surely were able to make up for it with a mixture of freelancers and two wrestlers from outside promotions. There isn’t as definitive of a winner this year as there was with Jake Lee in 2021, proving that an open field with the names involved could make for one of the best Champion Carnival tournaments in years.

The 12-man field is split into two blocks with, of course, the winners of each block facing off in the finals on May 4 at Korakuen Hall. Here’s a look at the field and who could be a contender to walk out with a Triple Crown Title shot.

The 2021 Champion Carnival winner has returned just in time to run it back this year. Jake Lee finally had his moment last year as his win in the Champion Carnival guaranteed him a shot at the Triple Crown Championship, which he won for the first time in his career. Unfortunately, an injury forced Lee to relinquish the belt. Lee has good a claim as any to get a shot for the Triple Crown Championship but it sure seems he will have to go back-to-back to get the opportunity. Looking at the A Block, Lee feels like the obvious favorite to represent this year. His confidence hasn’t shaken since the injury either. If anything, Lee has only become more confident knowing he is an uncrowned champion who never lost. Watch out for Lee to make this opportunity count once again as it might be his tournament to lose.

Shuji Ishikawa flashed back in time when he faced Kento Miyahara for the Triple Crown Championship. While he came up short, Ishikawa proved that he’s still a problem for anyone in AJPW. The former Triple Crown Champion is heading into the Champion Carnival as an underdog this year due to the placement of Jake Lee in the A Block. It wouldn’t be the first time he used the tournament to get to the title as his win in 2017 propelled him to the gold. At the age of 46, it’s probable that if Ishikawa wants one more run with the top title, he needs to put it together here to get another chance as he currently sits at the back of the line after his latest loss. Never say never, but Ishikawa is low on the list as a potential contender.

Shotaro Ashino has grown a bit since last year’s Champion Carnival but can he make this his year? As one-half of the AJPW World Tag Team Champions, Ashino has all the makings to be a future Triple Crown Champion. His tag team partner, SUWAMA, is as good as anybody to learn from when it comes to trying to reach the top of All Japan. His mixture of submissions and suplexes makes him more of a force for a tournament like this than anyone may realize. It was at Champions Night 3 where Ashino went one-on-one with Ryuki Honda in a Last Man Standing Match and pretty much destroyed him for the win. Ashino’s singles career hasn’t been nearly as good as his tag team run in AJPW to this point but obviously, that can all change in the Champion Carnival. He’s a dark horse in his block.

Ryuki Honda is a really good pro wrestler for those who may not be aware. He’s done nothing but impress since, well, injuring Jake Lee. Honda has had a spotlight shined on him like never before in his AJPW career and it was only a few months ago he was seconds away from becoming Triple Crown Champion. The 22-year-old has all the makings of a future champion even after failing so it should come as no shock that he’s making his opportunities count. However, there’s a downside for him heading into the Champion Carnival and it is mostly how loaded his block is. While it may not be as top-heavy as the B Block, it really does feel anyone can walk out of this block a winner which can also be beneficial to someone like Honda.

He’s not a favorite to win his block, let alone the tournament. That being said, expect a great number of performances out of him as he tries to leave his mark on the Carnival.

The reigning GAORA TV Champion Shigehiro Irie will enter another notable international tournament here in the Champion Carnival. Earlier this year, Irie competed in the wXw 16 Carat Gold Tournament, making it to the semi-finals before losing to eventual winner and ROH World Champion Jonathan Gresham. Irie is a bit of a wild card heading into this as he definitely has the talent to hang with the best of the best but could also finish in the bottom half of his block. It’s really how most of the A Block goes seeing that the only clear winner would be last year’s winner Jake Lee. Irie brings a style fitting of the round-robin tournament like this one here and should at least total two wins. The freelancer is the one true wild card who could surprise everyone with his placement in the end.

T-Hawk will represent #STRONGHEARTS in yet another company as he makes his debut in the Champion Carnival. If you’ve seen T-Hawk wrestle recently, you know how good this guy is. So good that it makes him the true dark horse of the A Block. His work in GLEAT over the past year but especially the last couple of months has been nothing short of excellent. T-Hawk came within a win from the finals of the G-REX Championship Tournament but ultimately fell to eventual winner and #STRONGHEARTS stablemate El Lindaman. It shows he can make a run in a tournament like this and while this is round-robin style, there’s a chance T-Hawk takes to it just as well. He’s the unknown when it comes to this tournament and will learn from his Royal Road match with Kento Miyahara last year.

T-Hawk is in it to win it and should put up a good total at the very least. 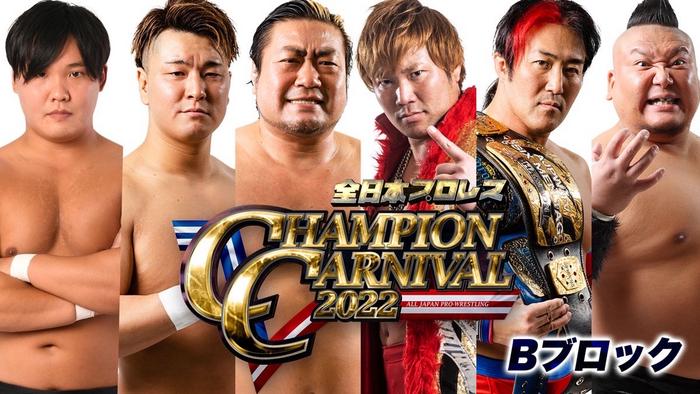 The Triple Crown Champion will enter the B Block as, well, the favorite. When looking at the remainder of the field, Kento Miyahara‘s major worry will be rival Suwama. The remainder of the field is filled with unproven names when it comes to the AJPW main event picture. Miyahara has risen to the occasion since winning the Triple Crown Championship for the fifth time in his career. AJPW’s ace is going to do all he can to protect his title and stop all comers through the Champion Carnival. His only other win in the tournament came in 2019, which is when he was in the midst of his 519-day reign as champion. It’s unusual in most puroresu tournaments that the champion wins the entire thing to pick his own opponent, but Miyahara has done it once and will do all he can to do it again.

The seven-time Triple Crown Champion has one Champion Carnival win to his name and it was all the way back in 2008. Suwama remains one of the best in AJPW and anyone who may question it needs to remember he entered last year’s tournament as the reigning Triple Crown Champion. Unfortunately, that title reign came to an improper end when he had to vacate the title due to COVID-19. It goes without saying but SUWAMA wants back the title he never lost and this is his best way to get there. As the oldest man in his block, SUWAMA will need to use his veteran skillset to make it to the end. He’s always a favorite, even if he hasn’t won the tournament in over a decade. SUWAMA should finish near the top of the block and potentially represent the B Block in the finals.

Could this be Yuma Aoyagi’s time to (finally) shine? It sure feels like it. Aoyagi has been deemed as a future Triple Crown Champion for what feels like forever now. Not only does he have what it takes in the ring but at the age of 26 years old, he certainly feels to be a boost All Japan could use in their often stale title picture. Aoyagi has had opportunities to seize the moment in the past but has rarely made it happen unless he was tagging with NEXTREAM partner Kento Miyahara. With Miyahara as the reigning Triple Crown Champion who is also in the block, it feels too good to be true that Aoyagi could win the Champion Carnival and challenge his partner for the gold.

When looking at the rest of the B Block field, Aoyagi will have to worry about two heavy hitters in Miyahara and SUWAMA but feels to be on the same level as Takuya Nomura in terms of young stars rising to the top of AJPW. It’s time for Aoyagi and he will be a favorite for a reason.

Yoshitatsu isn’t likely to walk out of the Champion Carnival with many wins. That’s just a fact when you are facing some of the best AJPW (and Japan as a whole) has to offer. What Yoshitatsu can do is play spoiler by potentially stealing a win against any of the big names here. He’s not a favorite or a dark horse but he will give it his all — that’s what counts.

Freelancer Kuma Arashi makes a return to the Champion Carnival after missing the tournament in 2021. Arashi is a seven-year veteran and a former WRESTLE-1 Result Champion (the final one, to be exact) whose solid build provides him with a great power game which he often leans on. While he isn’t attached to a promotion, Arashi has all the makings to be a serious player at any time. Arashi’s most recent tournament experience in AJPW saw him lose in the first round of the Royal Road Tournament in 2021, falling short against Shigehiro Irie. With such a top-heavy block featuring the reigning Triple Crown Champion, Arashi is surely going to be struggling for wins in this one. If anything, expect Arashi to play spoiler for one of the top contenders in B Block.

The wild card of all wild cards. The 28-year-old Takuya Nomura is one of the best wrestlers in the world and will have a chance to participate in the biggest singles tournament of his career as he enters the Champion Carnival. The former BJW World Strong Heavyweight Champion has all the makings of a favorite in this tournament. Nomura’s entry excited many fans of both Big Japan and puroresu as earning this opportunity to perform on a big stage will only bring more eyes to his talent. Nomura has a brilliant combination of striking, power, and technique that makes him as serious a threat as any in either block. While it’s difficult to say he is a favorite over the likes of Miyahawa and Suwama, he’s in the same breath as Yuma Aoyagi as a potential name who could breakthrough.

Nomura has the talent to be the 2022 Champion Carnival winner and should be the main name to watch when it comes to outsiders in the tournament.