The National Wrestling Alliance continues to feel the fallout from the Crockett Cup 2022 two weeks ago. On this week’s edition of NWA Powerrr, viewers will see the NWA World Women’s Champion, Kamille, take on Madi Wrenkowski. The End will challenge La Rebelión for the NWA World Tag Team Championship in what’s been a long-time-coming encounter. This is far from the extent of the action to come and it all unfolds live on FITE at 6:05 PM EST. Here’s what to know before showtime. 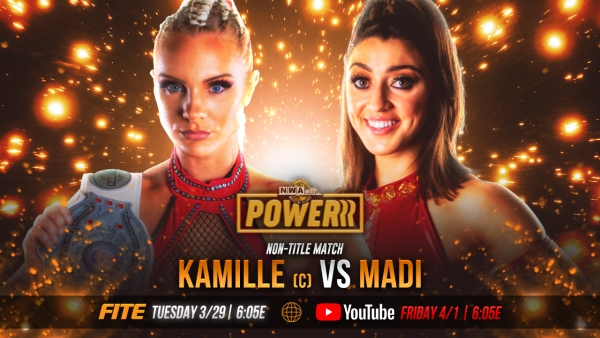 In one of the featured matches on this week’s NWA Powerrr, Madi Wrenkowski battles Kamille in non-title action. All Elite Wrestling fans will undoubtedly be familiar with Wrenkowski, as she’s appeared on multiple episodes of programming incluidng AEW Dark, Dark: Elevation, and Rampage. One can say that “Miss Reality” is standout and they wouldn’t be far off, either. On NWA programming, however, she has yet to secure that one major win that could help her reach the top of the company’s women’s division. Needless to say, a victory over said division’s singles titleholder would be the ticket to get there. Kamille is coming off a major victory at Night 2 of the Crockett Cup 2022, having bested not only Kylie Rae but Chelsea Green to retain “The Burke.” Despite this match not being for her championship, don’t expect Kamille to take it easy against Wrenkowski. 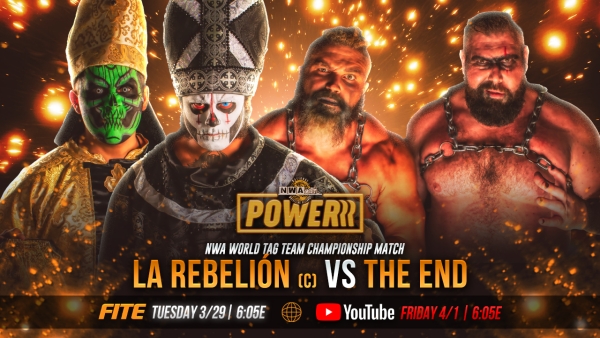 The NWA World Tag Team Championship is on the line as well on NWA Powerrr. The reigning champions, La Rebelión, will put her gold up against The End. These are two of the many teams that were involved in this year’s Crockett Cup tournament, both seeing varying results. The End was stunned in the first round, losing to the father-and-son duo of Hawx Aerie. Following their loss, Odinson and Parrow attacked Luke and PJ Hawx. The attack was so severe that Luke was incapacitated, PJ electing to go through the rest of the tournament solo. Despite showing tremendous heart, PJ lost in the quarterfinals to La Rebelión.

By comparison, La Rebelión fared much better throughout the Crockett Cup. They defeated The Bad News Boyz in their own first-round match. From there, Bestia 666 and Mecha Wolf 450 won their quarterfinal match against PJ Hawx, as mentioned earlier. The champions’ streak would end in the semifinals, however, falling to eventual finalists Doug Williams and Harry Smith, collectively known as The Commonwealth Connection. It would seem that La Rebelión is on a collision course with Crockett Cup winners The Briscoe Brothers, but to eventually reach this point, they’ll have to overcome The End.