For the fourth time, The Crockett Cup will unfold. Established by Jim Crockett Jr. in honor of his late father, The Jim Crockett Sr. Memorial Cup Tag Team Tournament is a single-elimination endurance pitting multiple tag teams against one another. When it comes to wrestling history, it’s difficult to overlook the importance of The Crockett Cup. This year, the National Wrestling Alliance honors this history with a two-day event, featuring not only the tournament in question but a series of championship matches. The action will take place at The Fairgrounds in Nashville, Tennessee on March 19 and 20, but for those unable to attend, the action will also unfold live on FITE. Here’s what to expect prior to the two-day Crockett Cup 2022 event. 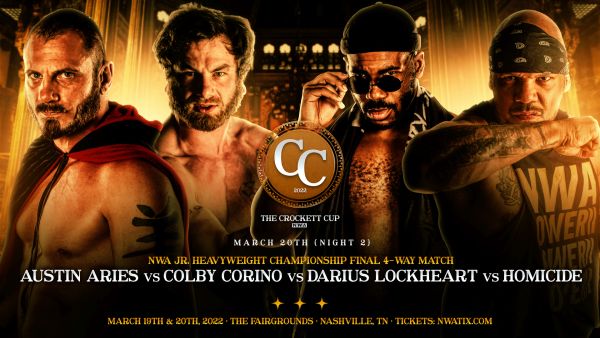 Late last year, the National Wrestling Alliance announced the revival of its Junior Heavyweight Championship. From 1945 up until 2017, this title was designed with the purpose of showcasing junior heavyweight wrestlers around the world. Since the latter year, the title has been rendered vacant. However, starting with the Hard Times 2 event, the quest to crown a new champion for the revived title kicked off. From singles qualifying encounters to grueling gauntlets, competitors had to take different roads to reach this point. At Day 2 of the Crockett Cup 2 event, four qualifying wrestlers will have a chance to make history by becoming the first NWA World Junior Heavyweight Champion in over 4 years.

In a four-way contest, Austin Aries, Homicide, Darius Lockhart, and Colby Corino will square off with title ambitions in place. In terms of veteran experience, Aries and Homicide are the forerunners. Homicide is considered one of the greatest independent stars to come out of New York, having captured gold in Game Changer Wrestling, IMPACT Wrestling, and elsewhere. Meanwhile, particularly in IMPACT, Aries has gone as far as to hold heavyweight championship gold, which bodes well for his chances in this contest. Lockhart is a relative newcomer to the NWA, but if there is any one chance for him to make an impression, it would be here. Throw in the oftentimes nefarious antics of “The Last Bastion” in Corino and it’s evident this match will be all the more must-see. 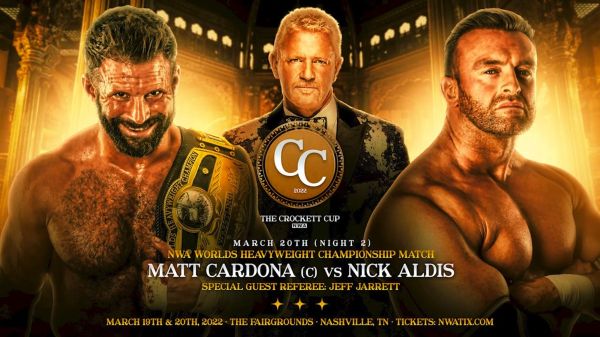 In perhaps the most important non-Crockett Cup match of this two-day event, Matt Cardona defends the NWA Worlds Heavyweight Championship for the first time. This won’t be an effortless endeavor, however, as he goes one-on-one with one of the NWA’s flagbearers, Nick Aldis. To provide some background, Cardona captured the NWA world title from Trevor Murdoch at this past February’s PowerrrTrip supercard. Following his victory, Cardona and his faction were approached by Aldis. “The National Treasure” noted that he hadn’t yet enacted his rematch clause following his title loss to Murdoch last year. Thus, Aldis laid down the proverbial gauntlet, challenging the “Alwayz Ready” action figure enthusiast for his newly won title. Adding an interesting wrinkle to this match is Jeff Jarrett, who will serve as the special guest referee.

Cardona should feel confident heading into Night 2 of the Crockett Cup 2022 event. Not only is he a titleholder across multiple organizations, including Absolute Intense Wrestling and IMPACT Wrestling, but he has the aforementioned faction dubbed The Cardonas in his corner. With that said, Aldis has been synonymous with “The Ten Pounds of Gold” for nearly 3 years. From December 2017 to this past August, Aldis held the NWA Worlds Heavyweight Championship for a collective 1,309 days, representing the NWA in both his home promotion and outside organizations including House of Hardcore and Ring of Honor. If Aldis is victorious at The Crockett Cup 2022, he’ll capture his third NWA world title. If Cardona has his way, though, this will be one goal that won’t come to fruition. 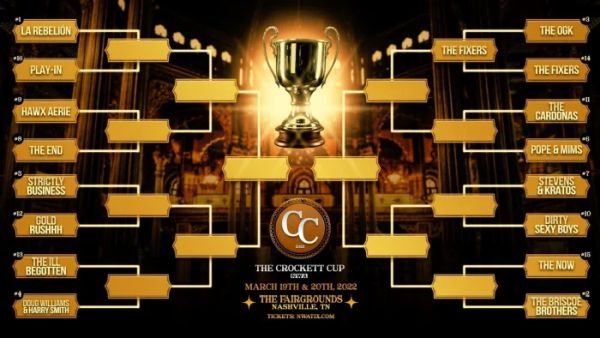 Finally, it’s time to discuss the crown jewel of this event. As mentioned before, The Crockett Cup is a single-elimination tag team tournament pitting various teams against each other. This tournament isn’t solely limited to tag teams in the National Wrestling Alliance, though. In addition to NWA mainstays including Strictly Business, Kratos and Aron Stevens, and reigning NWA World Tag Team Champions La Rebelión, such duos as 12x ROH World Tag Team Champions The Briscoe Brothers will also be in action. The setting for this year’s tournament is, for lack of better terms, stacked and it’s easy to see why there’s excitement heading into this weekend’s two-day show.

Regardless of wins this tournament, the prizes will remain the same. In addition to the iconic trophy, the winning team will also receive a future NWA World Tag Team Championship match. It would be putting it lightly to say that the title has history behind it. Since being established in 1992, it has been held by many great tag teams. From The Four Horsemen to The Rock ‘n’ Roll Express to America’s Most Wanted to Tencozy, the NWA tag team titles have been held by many notable teams. Can the winners of this year’s Crockett Cup go on to capture tag team gold as well? Regardless, the victors will find themselves making history this weekend.

Stay tuned to the Last Word on Pro Wrestling for more on this and other stories from around the world of wrestling, as they develop. You can always count on LWOPW to be on top of the major news in the wrestling world, as well as to provide you with analysis, previews, videos, interviews, and editorials on the wrestling world. The Crockett Cup 2022 will air live on March 19 and 20 at 8 PM EDT on FITE. Tickets can be purchased via SimpleTix.