With NXT 2.0 on the fast track to Stand & Deliver on WrestleMania Saturday, there’s a lot of excitement for the brand. So much so that there will be an extra-special edition of the show this week, NXT Roadblock, that can dramatically change the outlook for NXT’s first event outside of the Capitol Wrestling Center and Full Sail University since Feb. 16, 2020. It will be a big night for whoever is defending gold at that show but we won’t know for sure until the NXT roster can get past the roadblock ahead of them. The NXT Championship and Tag Team Championship will be on the line, making it a must-see show for the rainbow brand once more. Here’s a preview along with predictions for NXT Roadblock.

The NXT Tag Team Championship will be up for grabs as the champions, Marcel Barthel and Fabian Aichner, defend their belts against the Dusty Rhodes Tag Team Classic winners, The Creed Brothers. It goes without saying that this is one of the most exciting tag team matches NXT (and WWE, for that matter) has had in some time. The Creed Brothers have been one of the true shining parts of the NXT 2.0 revamp. Brutus Creed and Julius Creed have transitioned their amateur backgrounds as part of Malcolm Bivens’ Diamond Mine into two great tag team wrestlers. It watched them steamroll the competition, including former tag champions MSK. The Creed Brothers have faced Barthel and Aichner before as it was the first loss of their careers. That doubt has to be in the back of the head for Brutus and Julius, even if they are better now than they were then.

All signs point to this match being a physical war. Aichner is the only man who isn’t grounded in their attack, making him the x-factor for the champion side to walk out as winners or losers. The new age of NXT 2.0 still feels fresh enough to say that the new kids have a legitimate shot of winning here. 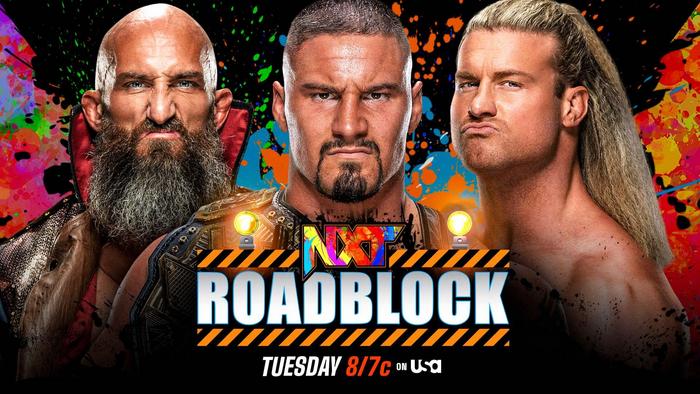 Let’s be honest about this one – Dolph Ziggler has been doing some of his best work over the last month since making his presence known in NXT 2.0. His match with Tommaso Ciampa a number of weeks back was his best since 2018 when he was feuding with Seth Rollins over the Intercontinental Championship. His focus hasn’t been on Ciampa, however, but rather Bron Breakker and the NXT Championship. “The Show-Off” is determined to win the title that he has never challenged for, making Breakker his rival in quick succession. It has led Breakker and Ciampa to be an alliance all over again. To the point that they dressed as The Steiner Brothers with matching singlets and everything to defeat the Dirty Dawgs on last week’s episode.

A triple threat means that Breakker doesn’t need to win to lose the gold. It’s a scary situation but one that NXT fans saw NXT Women’s Champion Mandy Rose in a while back. She walked out still champion and there’s no reason to think Breakker cannot do the same. Bron Breakker is NXT 2.0. It would be crazy to think he loses that title with a potential matchup against GUNTHER coming down the pipeline, potentially for Stand & Deliver.