ChocoPro #207 will be a different show compared to what Gatoh Move Pro Wrestling fans have seen in years past. For the first time, this show will be comprised entirely of men’s wrestlers, not only in the promotion but outside companies as well. In fact, one such wrestler will be making his Gatoh Move debut on this show on this very episode. With the women’s wrestlers away, it will be up to the men to pick up the slack. Here’s what to expect on the official Gatoh Move YouTube channel. 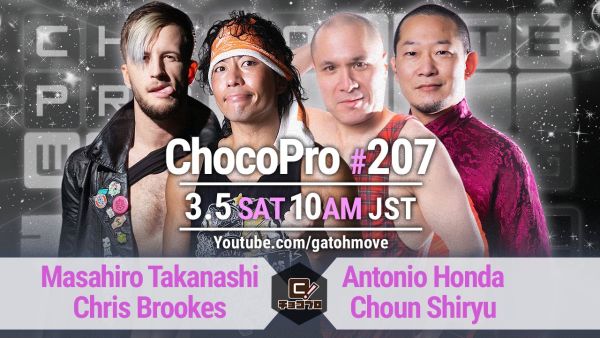 Opening ChocoPro #207 will be the Asia Dream Tag Team Champions in nontitle action. The current tag team champions, Calamari Drunken Kings, will go toe-to-toe with the makeshift duo of Antonio Honda and Chon Shiryu. Late last month, on ChocoPro #204, CDK captured the titles from Best Bros in a competitive match that went over a half hour. As the new champions, Masahiro Takanashi and Chris Brookes are equal parts wily and capable from bell to bell. While they may resort to underhanded tactics and act boastfully, it’s difficult to argue with their results as a tag team.

This isn’t to say that they should be terribly cocky, however, given their opponents on this upcoming episode. Chon Shiryu has the distinction of being a former Super Asia Interim Champion, becoming a workhorse in Ichigaya Chocolate Square during his time as one of the top men’s wrestlers on ChocoPro. “The Dragon” will be teaming with the crafty Antonio Honda, whose comedic antics often help them achieve victory in Ichigaya. “The Honey Hunter” is another example of a wrestler whose results are difficult to argue with no matter their approach. Expect this tag team match to be anything but ordinary. 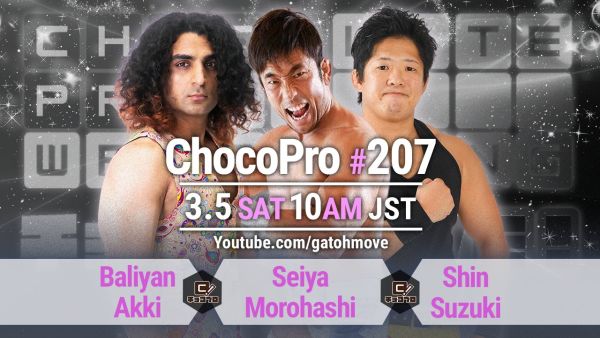 In the main event of ChocoPro #207, three men vie for the victory. Longtime fans of the show should be familiar with Shin Suzuki and, to a larger extent, Baliyan Akki. Suzuki is a recent ChocoPro regular, his spirit and approach fitting the mood of the show to a science. Akki is the current reigning Super Asia Champion, having defeated Minoru Fujita on ChocoPro #200 Day 2 to earn this accolade. Even though he experienced a setback when he, alongside Mei Suruga, lost the Asia Dream tag team titles to CDK, he seems to be regaining his footing as a singles competitor. The wildcard heading into this match, however, is the debuting Seiya Morohashi.