We’re on the last stop on the road to Revolution: AEW Rampage. Two days before the big event, All Elite Wrestling is pulling no punches, as we’re set for another red-hot edition of AEW Rampage. Let’s preview the action for this Friday night’s Rampage as the TNT Championship will be on the line in a three-way dance. “The Professor” and “The Limitless One” look to satiate their appetite for action. Last but not least, “The Instant Classic” battles “All Ego” for a spot in the “Face of the Revolution” ladder match.

Friday night will be an appetizer for the things that will be happening this Sunday night. Without further ado, it’s Friday night, and it comes to you, live! This is Rampage! Let’s run it down. 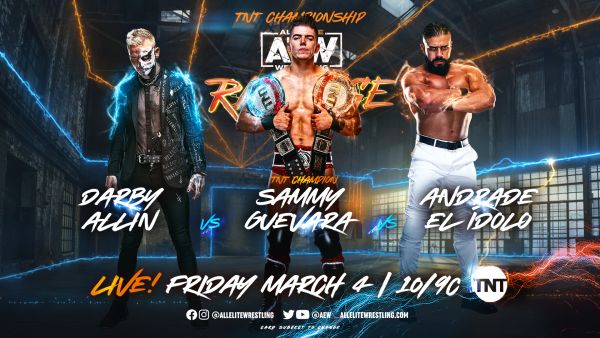 Calm Before the Storm

Ahead of their Tornado Trios Tag Team Match at Revolution, Sammy Guevara will defend his TNT Championship against one of his partners in Darby Allin, and one of the men they will battle on the other side Andrade El Idolo. Guevara and Andrade put on one hellacious show last week on Rampage, with both competitors giving it their all throughout the match.

However, once the dust settled, “The Spanish God” once again came away the victor and still champion. Guevara is without a doubt a fighting champion, having beaten Andrade and his partner for Sunday night,  Allin, in his last two title defenses in two equally amazing contests. However, Guevara and Allin will be on the same team at Revolution, and one might wonder, how will this affect their battle against the AHFO?

We shall find out this Friday night, it’s Andrade versus Allin versus Guevara for the TNT Championship! You do not want to miss this live on TNT! 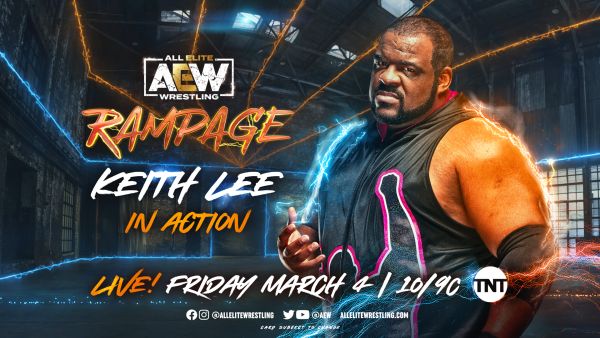 For the second week in a row, “Absolute” Ricky Starks interrupted another interview involving “Limitless” Keith Lee. However, instead of a snide comment, Starks issued a warning. Starks stated that Lee better watch his back on Rampage, as the Friday night show is “Starks Country” and he better be ready for anything. Undeterred, Lee didn’t even flinch despite Ricky’s threats.

All Lee is concerned about is getting warmed up for this Sunday night for the “Face of the Revolution” ladder match, and nothing will stop him from unleashing his wrath on a poor soul this Friday night. Keith Lee will be in action this Friday night on Rampage!