Fresh off their show that kicked off this weekend, Gatoh Move Pro Wrestling is set to follow up with ChocoPro #202. The Asia Dream Tag Team Champions will be in action in the main event of this two-match card. For wrestling fans that are partial to tag team competition, this will be an episode to keep an eye on. All of the action will be available live on the official Gatoh Move YouTube channel; if you’re unable to watch live, the show will be available to watch on-demand afterward. Here’s what to expect. 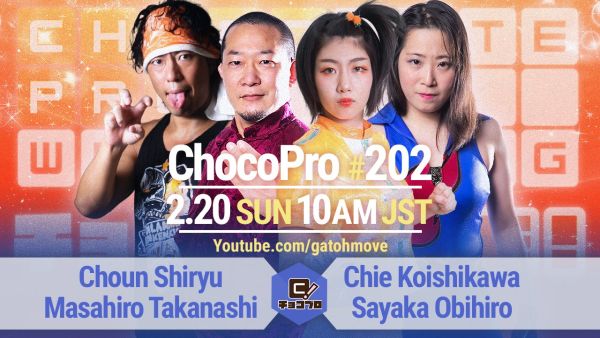 Opening ChocoPro #202 will be an intergender tag team contest pitting Masahiro Takanashi and former Super Asia Interim Champion Chon Shiryu against the core Gatoh Move duo of Chie Koishikawa and Sayaka Obihiro. Koishikawa and Obihiro share something of a student-and-mentor relationship and the several matches they’ve teamed together in are emblematic of this. Despite this, they have differing fighting styles, with “Chiezo” being more frantic and unpredictable and Gatoh Move’s “Blue Heart” relying more on a technical style. On paper, this is a tandem that’s difficult to beat.

If any team is up for the challenge, however, it would be Takanashi and Shiryu. Last month, Shiryu lost the Super Asia Interim Championship to Baliyan Akki, who went on to successfully defeat Minoru Fujita to become the undisputed Super Asia Champion. Since losing the interim title, “The Dragon” has been absent from wrestling and it goes without saying that he intends on returning with the will to win. Alongside a trusted long-time ally in Takanashi, this could become a reality. Who will emerge victorious in this encounter as the Asia Dream Tag Team Championship picture continues to evolve? 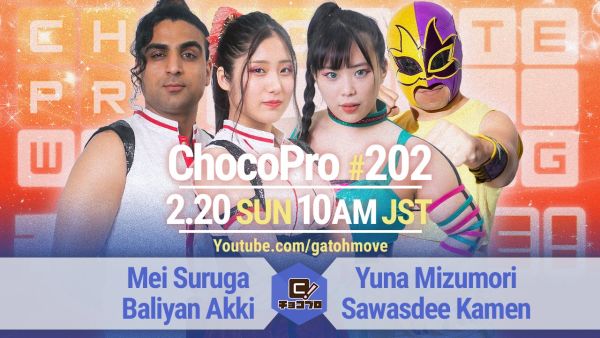 Speaking of the Asia Dream Tag Team Championship, the reigning titleholders will be competing in the main event. On the previous episode, Best Bros defeated Chie Koishikawa and Masahiro Takanashi in a nontitle bout. Following the match, Mei Suruga and Baliyan Akki stepped up to Takanashi, challenging him and Chris Brookes, collectively known as Calamari Drunken Kings, to a future match. Think back to ChocoPro #187, when CDK challenged Best Bros for the Asia Dream tag team titles. The match went to a draw, as both teams exhausted the 30-minute time limit. It may not be long until both tandems run this match back, this time to decide clear winners.

Prior to this, Best Bros will be in action against the team of Yuna Mizumori and Sawasdee Kamen. “Yunamon” is coming off a loss from the previous episode, as she was involved in a three-way match that was won by Shin Suzuki. Getting back to her winning ways is a goal, and understandably so, but she won’t have to do it alone. Teaming with Mizumori, wearing the Gatoh Move colors of yellow and purple, is Sawasdee Kamen. Call him the company’s mascot, call him a master of disguise – whatever the case may be, his presence is always welcome. Be sure not to miss this main event on ChocoPro #202.