Match Point is an ongoing series at Last Word on Pro Wrestling, where we look at intriguing matchups in indie wrestling and beyond. They may be dream matches, first-time matchups, or hotly anticipated rematches. This Saturday, at the Royal Rumble event, two juggernauts compete in a dream match as WWE Champion Brock Lesnar defends his title against Bobby Lashley.

Athletic, powerful, imposing – this is a set of terms that can be applied to either Brock Lesnar or Bobby Lashley. Despite being opponents this Saturday at the Royal Rumble event, these men share commonalities. In fact, it can be argued that WWE itself isn’t done a serviceable job at highlighting just how similar these men are. However, such commonalities will have to be set aside because, at the Royal Rumble, Lashley will challenge Lesnar for the WWE Championship. Before this match unfolds, let’s take a look back at how it came to be. 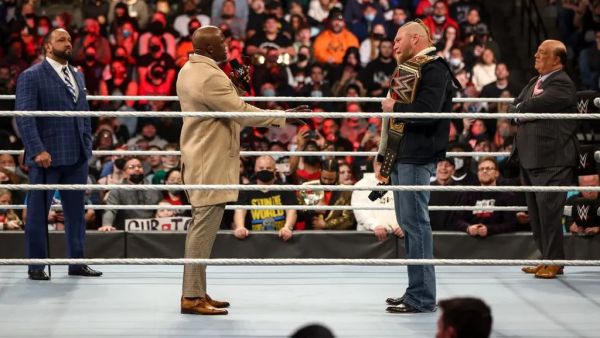 Turning Back the Clock

Prior to 2022, Brock Lesnar and Bobby Lashley never shared a ring. During their initial WWE runs, much like ships passing in the night, they missed one another. Following March 14, 2004, Lesnar left the company following a critically panned WrestleMania XX match with Goldberg. “The Next Big Thing” left an incredible career behind, however, capturing multiple world titles and winning the 2002 King of the Ring tournament and 2003 Royal Rumble.

By the time Lesnar left WWE the first time, Lashley was not even in the company picture. He wouldn’t debut until the September 23, 2005 episode of SmackDown. Lashley shared many of Lesnar’s attributes, specifically explosive offense and mind-blowing agility. Also, much like Lesnar, Lashley’s first sting with WWE was short-lived, as he departed the company in February of 2008. Given that he was a former United States and ECW World Champion by then, Lashley wasn’t without success of his own.

The similarities between Lesnar and Lashley don’t end with their first WWE runs; they also extend to their mixed martial arts careers. Lesnar made his transition into MMA incredibly seamless, becoming the UFC Heavyweight Champion and engaging in high-stakes competition, even considering complications stemming from diverticulitis. Lashley fared well in MMA as well, competing in such organizations as Strikeforce and Bellator, racking up an impressive 15-2 record. Not only did these two juggernauts make the transition to MMA but did so with flying colors, proving themselves beyond the boundaries of pro wrestling.

Stepping Forward Into the Present Day

When Bobby Lashley made his return to WWE in early 2018, having been away for a decade, Brock Lesnar was already involved in the company as a special attraction. In fact, by the time Lashley came back, Lesnar was deep into his first Universal Championship reign. It didn’t take long for wrestling fans to ponder the potential matches Lashley could have with the company’s modern roster, though a dream encounter with Lesnar wasn’t failed to be discussed. Given their fighting styles and athletic backgrounds, a one-on-one match in a WWE ring should have been a no-brainer. However, the company had other plans and fans would have to wait a few more years.

Following highs and lows early into his WWE return, Lashley began to pick up steam in early 2020, aligning himself with MVP and forming The Hurt Business. It was during this time that “The All Mighty” was starting to establish himself as a true force in the company. The unstoppable path of Lashley led him to his first WWE Championship last year. Lashley held the title for a solid 196 days, defending it against names ranging from Braun Strowman to Drew McIntyre to Goldberg. Ultimately, Lashley’s reign came to an end on the September 13, 2021 edition of Monday Night Raw, successfully defending his title against Randy Orton before falling to Big E, the latter of whom redeemed his Money in the Bank opportunity to win his own first WWE Championship.

Anyone that has been following Lashley, especially since 2020, can attest to how much his stock has been raised. Simply put, the man that WWE fans see on TV now is a far cry from the performer that was involved in skits involving his “sisters” and a romantic angle that did little to accentuate his strengths. It seemed that everyone recognized “The All Mighty’s” capabilities. That was, however, except for Brock Lesnar.

The Encounters Between Brock Lesnar and Bobby Lashley

The first time that Brock Lesnar and Bobby Lashley were in the same match was earlier this month at WWE Day 1. In the main event, Big E defended the WWE Championship against Kevin Owens, Seth Rollins, Lashley, and Lesnar, the latter of whom was originally scheduled to face Roman Reigns before the Universal Champion’s sudden COVID-19 diagnosis. While Lesnar won this match in minutes, what many viewers recognized was that he didn’t get any offense on Lashley. Rather, it was Lashley that got the better of “The Beast,” spearing him through the barricade during the bout. “The All Mighty” may not have won, but he made a statement against arguably the most dominant WWE Superstar.

Two days later, on the January 3 edition of Raw, Lashley won a four-way match to be crowned the new #1 contender for the WWE Championship. Watching backstage, scouting his future challenger, was Lesnar. Following Lashley’s victory, Lesnar was asked for a comment. With a smirk on his face, Lesnar responded, “Tell Roman Reigns I’ll see him this Friday on SmackDown.” In that moment, it became evident that the WWE Champion was looking right through Lashley, as if this new challenger wasn’t a threat.

The following week, Lesnar and Lashley had their first face-to-face encounter. This was where the dispositions of both men became apparent. Dressed to the nines, Lashley was all business, making it clear that he was looking to regain the WWE Championship. Meanwhile, the more casual Lesnar was playful by comparison. He even took viewers, as well as advocate Paul Heyman, by surprise when he made a knock-knock joke. “Okay, Brock, who’s there?” Heyman asked. “Bobby,” Lesnar responded. “Bobby who?” “Exactly.” The WWE Champion went so far as to refer to Lashley as a “Brock Lesnar wannabe.” If one needed an idea of what Lesnar thought of Lashley, leading to their Royal Rumble encounter, look no further than this segment.

This past Monday saw the go-home show of Raw, the final episode before the Royal Rumble event. Raw opened with Lesnar and Lashley’s weigh-ins, and once again, their attitudes differed. Lashley stepped onto the scales and flexed to the crowd while MVP verbally hyped him. Much like he had done in weeks past, Lesnar took his challenger lightly, once again referring to him as “Bobby Who.” Did Lesnar truly think that little of his opponent or was this a way to gain the mental advantage heading into the Royal Rumble pay-per-view?

Whatever the case may be, it’s apparent that Brock Lesnar and Bobby Lashley are on a collision course heading into the Royal Rumble. This first-time singles encounter has been eagerly anticipated by many, both from a physicality standpoint and in regard to stakes. For weeks, Lashley has been verbally disrespected by Lesnar; unfamiliar territory for “The All Mighty,” to be sure. The Royal Rumble is the platform Lashley needs to silence “The Beast,” capturing his second WWE title in the process. It could also be another stepping stone for Lesnar as his sixth WWE Championship reign continues.

WrestleMania: How Many Championships will change hands? - Powered By PickUp