The beauty of New Japan Pro Wrestling (NJPW) to this day is that Wrestle Kingdom manages to deliver even if you no longer follow the product as closely. Wrestle Kingdom 16 is the first time NJPW will run their biggest show of the year as a three-night event but night two will be the final night of traditional Wrestle Kingdom action. Seeing that night one is set to have the return of Katsuyori Shibata and the main event between Shingo Takagi and Kazuchika Okada headlining the show, it is going to be a tough time for night two trying to match it.

All that being said, many people believe that the best match of the last two Wrestle Kingdom’s did indeed come on night two as the 2019 event saw Tetsuya Naito finally have his crowning moment while Kota Ibushi was able to stop a world-class onslaught by “Switchblade” Jay White to walk away with the double gold. Night two for Wrestle Kingdom 16 will see Will Ospreay main event as he awaits the winner of Takagi vs. Okada as well as Hiroshi Tanahashi going to war with KENTA for the IWGP United States Championship. Here’s the card for the show.

– IWGP US Heavyweight Championship: KENTA (c) vs. Hiroshi Tanahashi in a No DQ Match

Stardom continues to make waves in the pro wrestling scene and will get their shot to be showcased on the Wrestle Kingdom card this year. The match will be a tag team match that puts together former tag team partners Starlight Kid and Stardom’s “Icon” Mayu Iwatani against Tam Nakano and Wonder of Stardom Champion Saya Kamitani. Formerly known as the MK Sisters, Kid and Iwatani will have to place nice with each other if they want to represent Stardom on their biggest stage yet. The other side of this match is Nakano and Kamitani, who will be a week removed from their Wonder of Stardom Championship match at Stardom Dream Queendom, which saw Kamitani defeat Nakano to win the championship for the first time in her career.

Trying to figure out who will walk away with the win is a difficult one but entertaining at the same time. Neither team is going to be a “well-oiled machine” but are going to want to help further Stardom’s growth more than anything else. Predicting an ending where Kamitani hits her signature Phoenix Splash feels like the right move, wowing fans in attendance and around the world in the process.

IWGP US Heavyweight Championship: KENTA (c) vs. Hiroshi Tanahashi in a No DQ Match 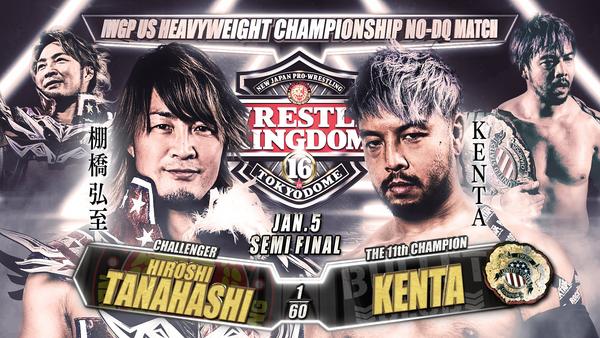 Hiroshi Tanahashi has a championship match at Wrestle Kingdom and even more importantly, it is against KENTA. Throughout the 2000s and into the 2010s, there may not have been anyone better inside the ring than these two men. Tanahashi helped lead NJPW back from their dark days, becoming their Ace and greatest wrestler ever. KENTA, on the other hand, was bashing and smashing people while in Pro Wrestling NOAH and traveling the world. Both men are incredibly accomplished and the fact we will get to see them compete for the IWGP US Heavyweight Championship at Wrestle Kingdom makes this one incredibly special.

KENTA made his NOAH return on Jan. 1, showing the side of him that made him part of best in the world conversations once upon a time. His Bullet Club and overall NJPW self haven’t reached the potential nor greatness that he displayed in NOAH, so if this is what was needed to awaken it, then it could be a tough night for Tanahashi. The No DQ aspect of this match will be the most difficult avenue for the Ace, as this favors the often clever KENTA. If Tanahashi goes in knowing this won’t be a fair right, it will be anyone’s match to win and will be excellent. Finally, the title needs to stop playing hot potato. 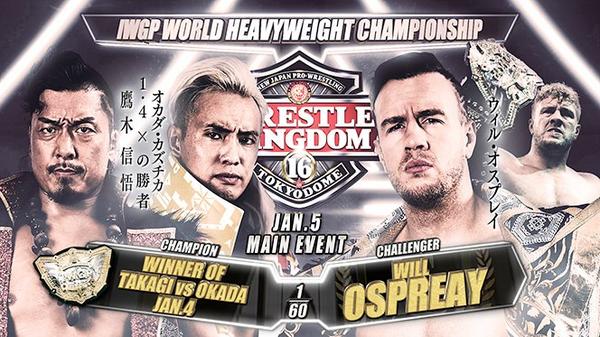 This is it. The real IWGP World Heavyweight Champion will be decided. After Shingo Takagi and Kazuchika Okada go to war on night one, Will Ospreay will be waiting in the wings on night two to take on the winner. Ospreay has a fair claim to the title after NJPW stripped him of the IWGP World Heavyweight Championship after he suffered a neck injury. An injury that was expected to hold him out of action for a substantial amount of time before he surprised everyone at NJPW Strong’s Resurgence show, stating he was back and the “real” world champion. He still has the belt to prove it. So the challenge was eventually made and “The Commonwealth Kingpin” now awaits the man he defeated twice last year in Takagi or Okada, who defeated him at Wrestle Kingdom 15.

It’s a difficult call, but whoever walks into Wrestle Kingdom night two should be walking out with the gold as well.