It has become a tradition for wrestling fans around the world to kick off the new year with New Japan Pro Wrestling (NJPW) as Jan. 4 has become Wrestle Kingdom day. The number of all-time classics that have come from Wrestle Kingdom events alone makes these shows some of the most important of the year in wrestling. And believe it or not, the time has come around once again to get excited for Wrestle Kingdom 16 as this year’s event will be in celebration of NJPW’s 50th Anniversary. Part of that anniversary is already paying dividends as a first-time-ever third day of Wrestle Kingdom has been made for an ultimate NJPW vs. Pro Wrestling NOAH show. But that’s on Jan. 8 and this is about the day that has become the signature.

A card that feels reminiscent of NJPW before the pandemic kicked in has fans excited to witness NJPW once more. Here’s a look at the Jan. 4 edition of Wrestle Kingdom 16 that will go down inside the Tokyo Dome.

– Katsuyori Shibata vs. X in a Catch Wrestling Rules Match

Katsuyori Shibata vs. X in a Catch Wrestling Rules Match

When Katsuyori Shibata made his shocking return to the ring at the G1 Climax Final to face Zack Sabre Jr. in a five-minute grappling exhibition, it felt all was right in the world for those five minutes. “The Wrestler” was back doing what he loved and if it had been a one-time situation, it would have been enough. But Shibata’s in-ring career will begin its next unexpected chapter as he will wrestle at Wrestle Kingdom in a Catch Wrestling Rules Match. The basis behind it is that it mirrors the Pure Rules that followed Ring of Honor’s Pure Championship. There will be no strikes thrown and mostly all grappling between Shibata and his opponent. Now the main question is simple: Who will be Shibata’s opponent?

There are two glaring options with the first being Kota Ibushi. As we know, “The Golden Star” injured himself on a Phoenix Splash in the G1 Climax Final, leaving his status in question for Wrestle Kingdom and further. The last update NJPW released was that Ibushi had the shot to compete at the major event but as we see with the card, his name is nowhere to be found. Making his own return and grappling with someone like Shibata would be fantastic. If he’s not cleared, however, then Minoru Suzuki feels obvious. Suzuki’s greatness matches Shibata’s making him a perfect fit for this one as his only Wrestle Kingdom match is against Pro Wrestling NOAH on night three. No matter who he faces, “The Wrestler” will be back. 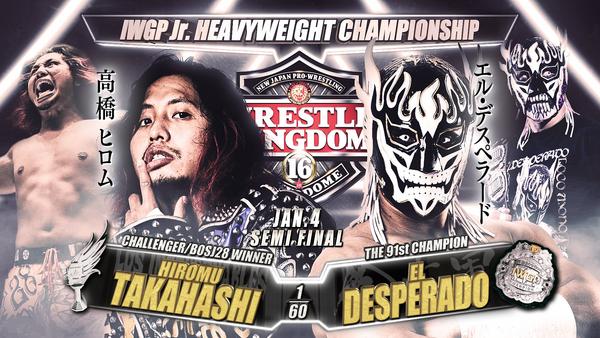 The one guarantee about this match right here is that it will be one of the best on any of the three nights. The IWGP Junior Heavyweight Champion El Desperado will face his greatest rival as Best of the Super Juniors winner Hiromu Takahashi prepares for the challenge. “The Ticking Time Bomb” has said that these two plan to go out and have the best match on all of Wrestle Kingdom, but most importantly, he plans to walk out with the IWGP Junior Heavyweight Championship. El Desperado isn’t just going to let that happen though. They wrestled to a draw in their last matchup during BOSJ, showing that no one may truly have the other’s number.

Being in the semi-main event spot only pushes these two to do more as Takahashi continuously says his goal is to get the IWGP Junior Heavyweight Championship to the main event of Wrestle Kingdom one day. These two are going to be physical, brutal, and willing to lose it all in the ring come Tuesday because this title is all they want. 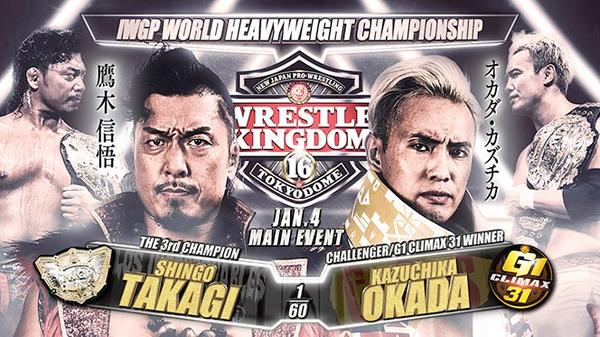 After a one-year hiatus, Kazuchika Okada is back in the main event of the Wrestle Kingdom inside the Tokyo Dome. He got there by channeling the greatness of “The Rainmaker,” winning the G1 Climax to secure his shot against IWGP World Heavyweight Champion Shingo Takagi. Okada’s road back to the top has been an interesting one that saw him try and make the Money Clip his new finisher, watch Will Ospreay turn on him and CHAOS, and just never be the version of himself that was once called the best in the world. We saw that best in the world version return in the G1 Climax for a number of matches and as he carries the V4 IWGP Heavyweight Championship instead of a briefcase, he prepares to take on “The Dragon.”

Shingo Takagi was the wrestler of the year in NJPW for 2021 and the result was him carrying the IWGP World Heavyweight Championship into Wrestle Kingdom 16. Takagi has shown he can defeat Okada, doing so twice last year, including the match where he won the IWGP World Heavyweight Championship. It feels like it would be a letdown for Takagi if he wasn’t able to hold the gold and defend it on night two, almost being forgotten in a sense. It’d be fair to say that this is the biggest match of his career because, well, it very well might be.

The winner of this match goes on to defend the title against Will Ospreay on night two.