AJP Prime Night 2021 is considered by many the last major event of All Japan Pro Wrestling’s calendar year; last year’s event saw the departure of Yusuke Okada. However, on this year’s show, we have three major departures, all being major players in AJPW. Let’s get into the show to come. 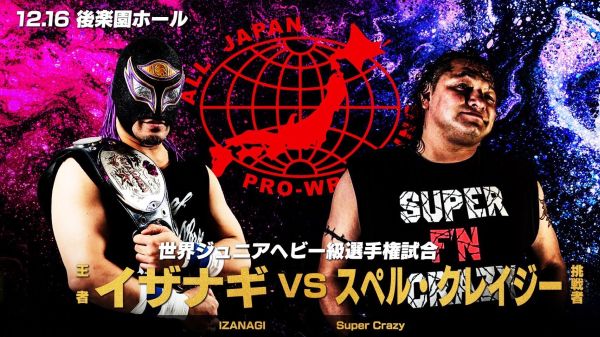 On this show, we have a sole title match featuring Izanagi making his first AJPW World Junior Championship title defense against Super Crazy. Super Crazy came to AJPW during the recent Real World Tag League, being unsuccessful alongside Tajiri. Izanagi won the World Junior Championship at Champions Night 2 when he defeated SUGI. This upcoming bout with Super Crazy marks Izanagi’s first title defense of this reign. It seems unlikely that Izanagi will lose his championship shortly after winning it, but the craziness of All Japan’s junior division wouldn’t make it completely predictable. 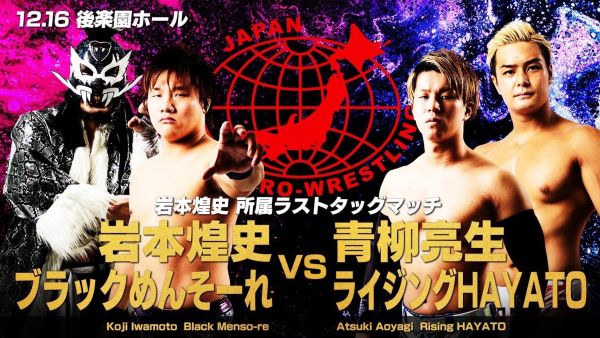 Koji Iwamoto is considered by many the ace of AJPW’s junior division. Iwamoto held the World Junior Championship multiple times in the past three years. He is also the first of three major departures that will take place at this show, teaming with Black Menso-re against Atsuki Aoyagi and Rising HAYATO. While this match will feature great junior action, it is unfortunate that Iwamoto will be leaving AJPW.

Koji Iwamoto has noted previously that his departure relates to personal goals in his life, while certain leaks have reported him potentially signing with GLEAT down the line. Nothing is official, except this being his last match for All Japan Pro Wrestling. 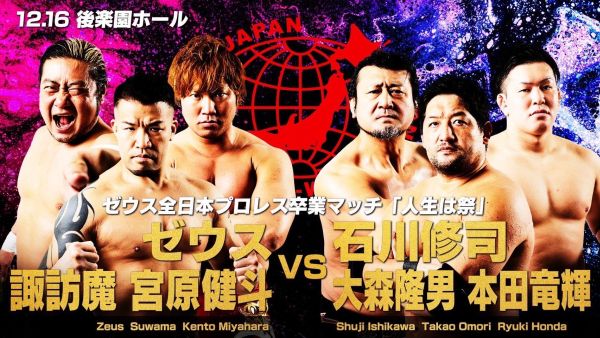 When it comes to prominent members of All Japan Pro Wrestling, one such name would be Zeus. He is a former Triple Crown Champion and tag team specialist with The Bodyguard in earlier years. Zeus has been a mainstay of AJPW since 2014. In his career, he became an established main event player, his biggest feud being against Kento Miyahara. Last month, it was announced that Zeus would be leaving AJPW.

The reason for his departure is his involvement in the revival of Osaka Pro Wrestling (OPW), being the company’s new owner. Zeus’s final bout will be a trios match, teaming with Suwama and Kento Miyahara to take on Shuji Ishikawa, Takao Omori, and Ryuki Honda. Some of these wrestlers Zeus has incredible chemistry with, with the last three matches of this show being an emotional trip for fans.

Another thing to note here is this might not be his last match for AJPW as a whole, but rather his last match as a contracted talent. Zeus has shown interest in working with AJPW with OPW, which could help AJPW’s partnerships and be major for both companies.

Naoya Nomura could be described as one of the biggest “what if” scenarios in All Japan Pro Wrestling. 2019 was a defining year of his career, breaking out of Kento Miyahara’s shadow and facing off against him multiple times during the latter’s reign of Triple Crown Champion. However, 2020 brought tragedy with Nomura getting injured. This injury took him out of AJPW’s programming for almost 22 months. He would make his first appearance during the finals of the Real World Tag League.

In this return, Naoya Nomura announced his departure from All Japan Pro Wrestling. The reasons for his departure are only known from certain leaks. These include the direction of the company and alliance towards its former booker, Jun Akiyama. It could also be related to his lingering injury issues.

In Naoya Nomura’s final match, he will face off against Yuma Aoyagi. They were partners in NEXTREAM, becoming 2x All Asia Tag Team Champions. Nomura is a top free agent as of December 3, with many assuming that he could join DDT (Dramatic Dream Team) in the new year due to the connection of Jun Akiyama.

None of this, however, is for certain for the company and for the career of Naoya Nomura. What’s certain is that AJP Prime Night 2021 will be an emotional night for All Japan Pro Wrestling fans.