Throughout 2021, Bianca Belair has been one of the standout stars; a true gem of this “new era” of WWE being touted by the company itself. At WrestleMania 37, she made history and became one of only five women (Sasha Banks, Charlotte Flair, Ronda Rousey and Becky Lynch round off the list) in WWE history to main event a WrestleMania and, more importantly, is only the second woman to win in the main event of WrestleMania. With her main event match against coming against Sasha Banks, she also made history as one-half of the first ever all-African American main event at a WrestleMania – a proud distinction which no doubt motivates her to achieve even more success not only for herself, but for those she inspires. Bianca then went on to have a memorable run as SmackDown Women’s Champion, with an excellent feud with criminally overlooked Horsewoman, Bayley, being a particular highlight – as well as a huge match at Rolling Loud festival, which announced her to a new, mainstream audience. Make no mistake, then, that his has been the year of the EST.

.@BiancaBelairWWE has defeated 3 of the 4 Horsewomen, is @BeckyLynchWWE next? pic.twitter.com/yUrjt14XBv 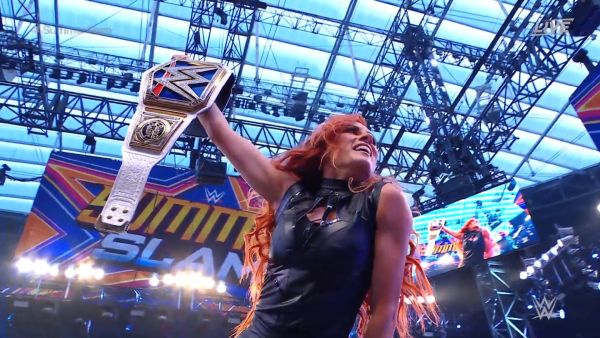 SummerSlam 2021 is where the wheels began falling off the wagon. Originally penciled in to defend her SmackDown Women’s Championship against long-time rival, Sasha Banks, Bianca instead ended up facing a returning Becky Lynch. Becky had been gone for over a year and, as a more than beloved member of the WWE roster, she returned to raucous applause. Yet, when The Man overcame The EST in mere seconds, many fans were left confused; the manner in which Becky won – with a quick cheap shot – evidently pointed towards a heel turn. The manner in which Bianca lost made many fear for the worst.

Ever since ditching the steampunk and donning “The Man” persona, Becky has been an absolute favorite of Vince McMahon and the WWE creative team; she had become something akin to a female Stone Cold Steve Austin prior to her taking maternity leave – an anti-authority babyface who simply can’t stop winning. Now, she is in her 2001 heel Stone Cold phase, but it doesn’t look like she is losing the Raw Women’s Championship – gained through a silly trade with Charlotte – anytime soon.

With this week’s edition of Monday Night Raw witnessing another Becky Lynch victory over Bianca Belair – a clear signal that Becky is not dropping the gold anytime soon and that this feud is likely over – it begs the question: what next for Bianca? Having been drafted to Raw, she finds herself in unfamiliar pastures as a part of a women’s division which has, in recent times, been barely featured. To squander the potential of Belair – who, again, has been one of the biggest faces in the company in 2021 – would be a terrible, terrible decision. To let her flounder in catering would be criminal. With Becky seemingly moving on to a feud with Liv Morgan (a criminally underrated performer), there is nothing left for Bianca to do on a roster she has only recently moved to.

The only two other titles she is eligible for are the 24/7 Championship – which should never happen, given the nature of that title – and the WWE Women’s Tag Team Championships, which are currently held by fellow babyfaces, Nikki A.S.H. and Rhea Ripley. She could follow in the footsteps of Chyna and challenge for a secondary title but given that Raw’s secondary title, the US Championship, is held by another babyface in Damien Priest, this is impossible. Bianca Belair is directionless right now and if the WWE creative team isn’t careful, she is in serious danger of becoming an afterthought – a waste of all of the hard work creative and Bianca herself have put into her character in 2021.