Friday night will be a major night for WWE as it will mark the official start of the new rosters on both Raw and SmackDown. The blue brand will get its first chance to show what they’re all about and coming off Crown Jewel, it will be an important night to make a good first impression. As the build to Survivor Series begins, how will the newest roster members mix with the returnees? Here’s a look at the SmackDown card for Friday.

SmackDown has a new roster and it is one that screams opportunity. Looking at the roster that they drafted, only four total superstars who do not hold gold have had a world title match over the past year, furthering the fact that it’s time for the opportunists to take over. After all, SmackDown has been seen as the “Land of Opportunity” for years and there’s no better time than now for that to come true. Led by Universal Champion Roman Reigns and Raw Women’s Champion Charlotte Flair, SmackDown has two stars to lead a roster of uncertainty for the next year. When analyzing who could be the ones to step up, superstars like Ricochet and Naomi are instantly noticed. Add in the call-ups from NXT in Hit Row, Ridge Holland, Aliyah, and Xia Li, you hope someone is able to grab the opportunity and run with it.

With Survivor Series being the next show to build around, it’s the best chance for the newest of faces to take the lead. Drew McIntyre and Sasha Banks should take over as leaders as well even without gold. There’s no guarantee as to who will rise to the top but it should be an interesting night to see how it all plays out. 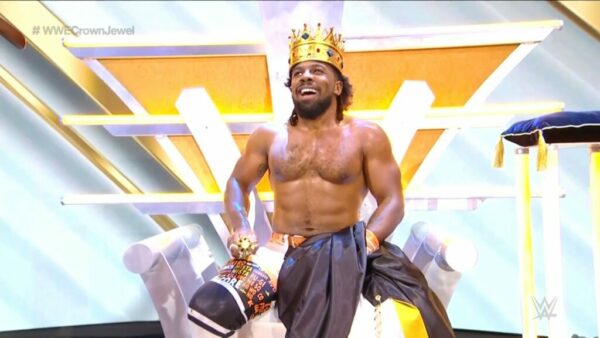 All hail King Xavier Woods. At Crown Jewel, the boyhood dream came true for Woods as he defeated Finn Balor in the finals of the King of the Ring tournament to become WWE’s one true King. An emotional Woods discussed how following the match, it was still a surreal moment to him. There’s no guarantee as to what Woods might have in store for the rest of SmackDown but what we do know is that it should be must-see television.