Gatoh Move Pro Wrestling is set to wrap up this weekend with ChocoPro #167, which features a repeat main eventer from the previous show taking on one of the company’s titleholders. This is just one of the many attractions to consider, especially as the competitors that made Ichigaya Chocolate Square their home away from home inch closer to title contention. There are two championships to go for and the results of the matches here could give anyone the edge. Without any further delay, let’s take a deeper dive into ChocoPro #167. 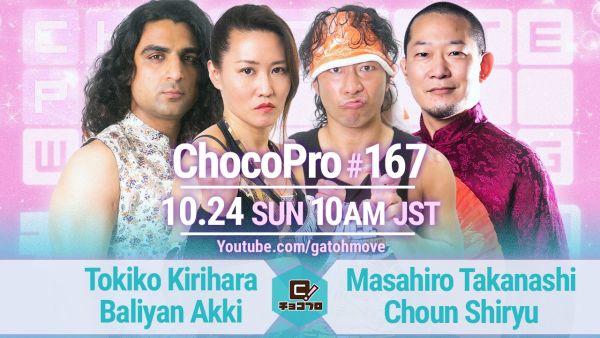 The first match of ChocoPro #167 will see Baliyan Akki, self-proclaimed “Ace” and Asia Dream tag team titleholder, teaming with the hard-hitting Tokiko Kirihara to battle the seasoned duo of Masahiro Takanashi and Chon Shiryu. Kirihara and Akki, on paper, make for a formidable team. Not only are they both proficient with strikes but they are solid tag team wrestlers in their own respects. However, their success rate, as a team, has been less than stellar. They last teamed on ChocoPro #145, back in August, which saw them fall to Takanashi and Antonio Honda. A win here would allow them to redeem the aforementioned loss.

Many ChocoPro viewers often consider Takanashi and Shiryu as foes. After all, they’ve competed against one another multiple times in Ichigaya Chocolate Square, even before Takanashi made his official return to action earlier this year. However, given the number of one-on-one matches they’ve had, it’s safe to assume that mutual respect developed from there. In fact, this past July, they picked up a tag team victory against this show’s main event competitors on ChocoPro #138. It’s fair to say that Kirihara and Akki have a tall task ahead of them, which should result in a competitive encounter.

In the main event of ChocoPro #167, “Too Much Energy” Chie Koishikawa will battle one-half of the Asia Dream Tag Team Champions, Mei Suruga. Given the level of performances that she’s put forth in these big matches, it’s easy to see why Koishikawa earned the fan moniker of “Main Event Chie.” However, more often than not, these big performances resulted in losses on her end. While she’s been able to keep up her energetic disposition, it wouldn’t be farfetched to assume that the losses in question have chipped away at her psyche. Further chipping away at her mindset has been “Mei-chan,” who she will get the chance to take on in this main event encounter.

In terms of Best Bros, the team of Suruga and Baliyan Akki, Gatoh Move’s “Apple Girl” has been nigh unstoppable. As Asia Dream Tag Team Champions, Best Bros have not lost a traditional two-on-two match since this past May, previously losing to Yuna Mizumori and Emi Sakura in a grueling gauntlet match on ChocoPro #122. Even as a singles competitor, Suruga has consistently proven herself as one of the promotion’s top competitors. In fact, while it’s been Akki that’s had his sights on the Super Asia Championship, Suruga could be just as viable of a contender. On this show, she will have to focus on Chie Koishikawa, who will be motivated to best one of Gatoh Move’s titleholders.