This Saturday, Game Changer Wrestling gears up for another Fight Club event. The previous one was relatively recent, as GCW and Loko Wrestling co-hosted their own event in Houston, Texas back in July. This Saturday, live from The Showboat in Atlantic City, New Jersey, GCW’s best will fight under one roof. The main event is one that has been months – even years, depending on the perspective – in the making. This upcoming boat alone makes this show all the more must-see. Let’s not waste any more time; it’s time to preview the action set for GCW Fight Club this weekend. 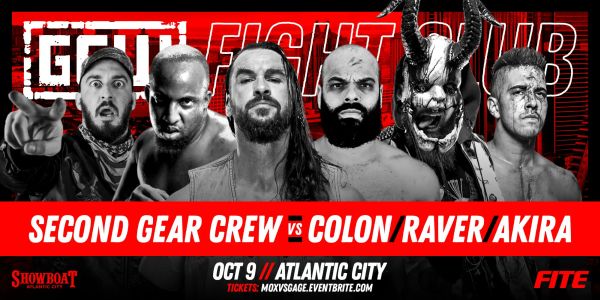 “The Death Samurai” Akira will make his Game Changer Wrestling debut at GCW Fight Club. Born in Indiana, he made his professional wrestling debut in early 2018. From IWA Mid-South to ACTION Wrestling and everywhere in between, he’s had more than his share of platforms to ply his craft. His wrestling style can best be described as a mix of technical prowess and deathmatch savvy. Simply put, he knows multiple ways to punish his opponents. This Saturday, Akira debuts for GCW in a major six-man tag team match that also includes the reigning GCW Tag Team Champions.

Alongside fellow deathmatch enthusiasts G-Raver and Alex Colon, Akira will battle AJ Gray and GCW Tag Team Champions Matthew Justice and Mance Warner of Second Gear Crew. It’s fair to say that Second Gear Crew has been on a roll, especially in GCW. They’ve been undefeated, in the promotion, since August and it’s easy to see why. Justice and Warner bring their own deathmatch expertise to the fold. Meanwhile, the explosive offense of Gray adds a different ingredient to the overall recipe. Though Akira will undoubtedly fight to make his GCW debut a win, Second Gear Crew won’t make it easy for him. 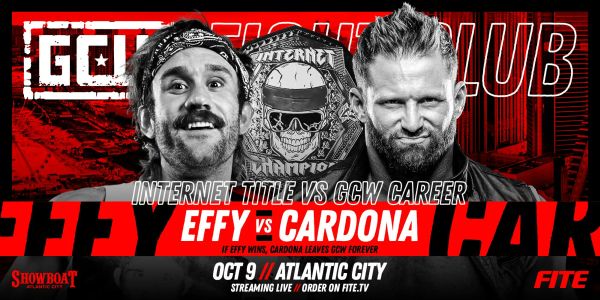 “The EFFY Experience” has become the latest thorn in the side of the self-proclaimed “Face of GCW.” Cardona’s descent started last month at The Art of War Games. In a GCW World Championship match, Cardona defended his title against Frank the Clown in 11 seconds. One wouldn’t be far off calling said encounter a joke. However, as the “Alwayz Ready” titleholder gloated, G-Raver and a group of “druids” entered the fray. Cardona dispatched most of the druids in question, save for one. This individual unveiled himself as Jon Moxley, who quickly dispatched Cardona in a surprise title match. By the end, Moxley won the GCW world title, ending Cardona’s reign at 42 days.

Later that month, at GCW Get Lost Alot, an incensed Cardona demanded that he be added to tonight’s GCW World Championship match. GCW founder Brett Lauderdale accepted, but only if Cardona successfully defended his Internet Championship at Get Lost Alot. This led to none other than EFFY rolling up Cardona from behind, shocking the wrestling world, as well as the former titleholder, by becoming the new Internet Champion. Cardona was further enraged by this, claiming that he was the real Internet Champion, not EFFY. The Long Island native has the opportunity to prove it at GCW Fight Club. The stakes couldn’t be higher, though. A win for Cardona would result in him reclaiming his title; conversely, a loss would mean the end of Cardona’s career in Game Changer Wrestling. 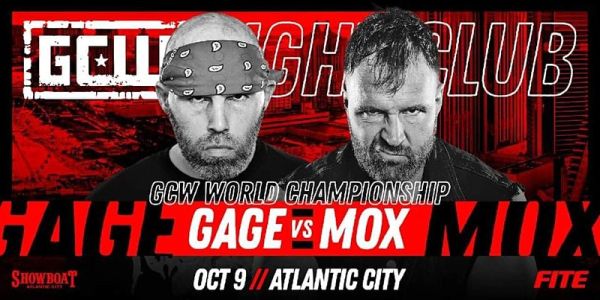 Over a Decade in the Making

To fully understand the importance of this main event encounter, one must turn back the clock to 2009. During this time, “The King,” Nick Gage, was an established wrestler on the independent scene. He made his professional debut during the late 90s and earned a reputation as a deathmatch specialist. His affinity for foreign weapons and inclination to take matters to the extreme afforded him tremendous popularity. Meanwhile, the young Jon Moxley was only a few years into his own professional career, having competed for Heartland Wrestling Association and elsewhere. However, it was in Combat Zone Wrestling where Gage and Moxley first locked horns.

Even without seeing a single CZW match, fans may still know the extent of Gage and Moxley’s battles. On the Nick Gage-focused episode of Dark Side of the Ring, Moxley talked about working with Gage, recalling the latter’s ultraviolent approach, use of weaponry, and the like. The two waged wars in multiple ways, ranging from multi-man competition to title bouts where the CZW World Heavyweight Championship was exchanged. As Moxley moved forward in his career, signing with World Wrestling Entertainment and later All Elite Wrestling, Gage became the “hero” of Game Changer Wrestling, often main eventing shows or having significant matches on them.

Earlier this spring, Moxley and Gage revisited their long-standing rivalry. It was only a few months ago, at GCW Draft Day, when “The King” and “The Wild Thing” were fighting down the streets of Las Vegas, Nevada. Even when Gage lost the GCW World Championship to Matt Cardona at GCW Homecoming, it seemed like Moxley was always looming. This was evident last month when, as mentioned earlier, Moxley surprised Cardona by defeating him for the world title at The Art of War Games. Given Moxley’s current status as champion, this rematch over a decade in the making couldn’t be more perfect.

Can Gage regain the title, in his match element, and make history as a 3x GCW World Champion? All will be answered at GCW Fight Club. Also in attendance tonight will be WWE Hall of Famer Mick Foley, who will present the GCW World Championship prior to the main event. This is one show not to miss.

Stay tuned to the Last Word on Pro Wrestling for more on this and other stories from around the world of wrestling, as they develop. You can always count on LWOPW to be on top of the major news in the wrestling world, as well as to provide you with analysis, previews, videos, interviews, and editorials on the wrestling world. GCW Fight Club is set to air Saturday at 8 PM EST on FITE.