AEW Dynamite brings another massive show to the screen as it would be the “Anniversary” edition. Almost every single match scheduled for the show had a big fight feel for one reason or another, only enhancing the excitement heading into it for fans and wrestlers alike. Here are the AEW Dynamite results for the second-anniversary edition of the show along with some analysis.

— The Introduction of the TBS Championship

There may not be a better way to open a show than a match between The Super Elite and nearly anyone. We’ve seen it time and time again, this being no different. While it was not able to live up to the likes of The Super Elite versus Hangman Page and The Dark Order, it still managed to pack a punch to be a great opening bout. The basis of this one is as simple but great as you’d expect — The Super Elite trying to cut off all competitors by any means to get the match down to four versus one. Jungle Boy was their target from the start but he managed to fight back and show that he belongs in the ring with such stars like The Super Elite.

He had the momentum for his team up until Michael Nakazawa and Brandon Cutler attacked Christian Cage on the outside. All of their distractions allowed The Young Bucks to take him out via IndyTaker. That one move sidelined Cage for the remainder of the match and spelled the end, but both Luchasaurus and Bryan Danielson had their own moments to show that they might not need Cage to win this one. In the end, the number game caught up. Danielson would be hit by a triple Superkick from The Young Bucks and Adam Cole, leaving Jungle Boy to be finished off. A Super Elite BTE Trigger would visually destroy the head of Jungle Boy, leaving him unconscious to give The Super Elite the win.

Was this match perfect? Not by any means. But this is the type of match that brings fans into Dynamite more and more every week. The promise of top-tier action week after week shows why AEW calls itself the home of professional wrestling. The Super Elite’s ability to get heat while also being cheered never fails to impress, as one minute they will cheat to take out one man then the next minute they will be giving the fans what they want with a double kiss to the cheeks of Adam Cole. Love them or hate them, they are the one constant to deliver in every single outing. Danielson, on the other hand, continues to display that he is still one of the best.

Trying to guess what’s to come between Omega and Danielson should keep the pro wrestling world interested — which is exactly what AEW wants. It is only getting better and better. 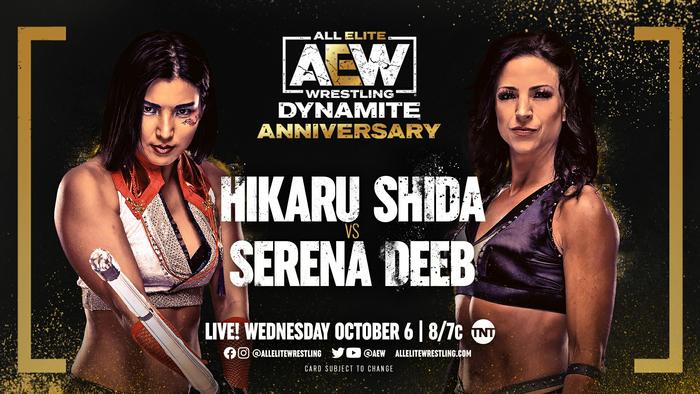 Women’s wrestling. Out of all the great things AEW does on a week-to-week basis, the women’s division is continuously one aspect that fans hope to see improvement in. Not because they don’t have the talent, but it has been rare to see their top wrestlers in the division compete outside of PPV. Well, Wednesday night saw AEW’s best women’s champion to date in Hikaru Shida attempt to get win number 50. She would have become the first in the history of the promotion to do so but as we saw, that was not the case. Her opponent is a woman that some call the best women’s pro wrestler in the entire United States in Serena Deeb. It was a match that began with class between the two but turned ugly in the end.

As the match went on, Deeb found an opening when Shida was getting into the ring following a crossbody to the outside. With that opportunity, she hit a chop block and Dragon Screw to Shida’s knee. They managed to battle back and forth, but this was becoming a problem for the former champion. Shida’s knee would be a shining target for the crafty Deeb, who would brutalize it more as she got desperate. The former NWA World Women’s Champion locked on her Serenity Lock to make Shida tap out, stunning the entire arena. It’s this type of match that the fans want to see from the women’s division. Two of AEW’s very best went out and put on a show, battling and getting into the head of one another to just nab a win. No championship was needed.

AEW needs more of this. After all, this was Shida’s first Dynamite appearance since the show before Double or Nothing. If they embrace the great women on their roster, they will move closer to being that much better. Deeb feels like an instant favorite to be the first TBS Champion after Wednesday night. One of the best women’s matches in AEW all year long.

Rather than giving analysis for the match, why not just the “Joker?” All week long, fans were wondering who would be the final man to enter the Casino Ladder Match with an AEW World Championship match on the line. That man was the one piece to the puzzle that has been missing in all this mayhem over the last two months — Hangman Page. If anyone was worried that the additions of CM Punk, Bryan Danielson, and Adam Cole plus the time away would halt or hurt the popularity of Page, they were shown Wednesday night that he is still the one everyone wants to win the big one. The moment his music hit, Philadelphia lost their minds as Page was back in AEW and had the most determined look on his face.

The fans in attendance wanted only one man to win at this point as they booed anyone who came close to stopping him. Jon Moxley, Lance Archer, PAC… it didn’t matter. This was Hangman’s night and the arena erupted when he was able to fight everyone off and take down the chip, securing the AEW World Championship match with Kenny Omega that he had stolen away from him. Not only was it the perfect moment for Page to make his return, but it confirms that he is 100 percent the man to still dethrone Omega as the next AEW World Champion. Welcome back to Hangman as AEW only seems to get better. It’s his time.

NXT 2.0 Is Still Finding Its Footing
Who is the best play-by-play announcer in wrestling today?