It’s almost time for the penultimate episode of ChocoPro season 9. One may find it difficult to believe that Gatoh Move Pro Wrestling is inching closer to another season finale and to say that this has been an important season would be an understatement. The crew has been without Emi Sakura and Lulu Pencil for a good portion of it, resulting in the remainder of said crew picking up where their mentor left off. ChocoPro #161 should prove to be just as thrilling, as a total of 3 matches are set to take place, including one featuring a former KO-D Openweight Championship contender. Here’s what to know. 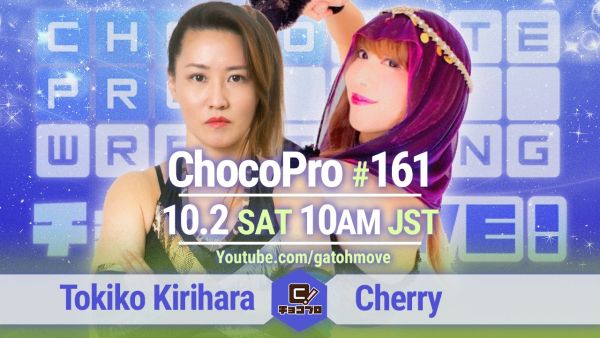 Opening ChocoPro #160 will be a singles contest between “Otoki-san” herself and a wily fortune-telling grappler. Tokiko Kirihara has had an eventful season 9 in her own right. Even outside of ChocoPro, Kirihara has found herself making waves. Case and point, earlier this month, she appeared for Ganbare Pro Joshi Pro-Wrestling, an extension of the more commonly known DDT Pro-Wrestling. She faced fellow ChocoPro regular Yuna Mizumori, and though “Yunamon” won this encounter, Kirihara held her own. Now, Kirihara steps back into Ichigaya Chocolate Square to battle a legend with a near yearlong score to settle.

In October of 2020, on ChocoPro #56, Kirihara battled Cherry in the opening match. Though Kirihara fought valiantly, it was the more experienced Cherry that came away with the victory. As “Otoki” continued to toil in ChocoPro, Cherry has since been active in a variety of promotions. These include, but aren’t limited to, DDT, PURE-J, and Ice Ribbon. Last month, in PURE-J, Cherry struck gold as she won the Daily Sports Tag Team Championship alongside Leon, a joshi veteran in her own right. As she reenters Ichigaya Chocolate Square a champion, will Cherry, once again, stand tall over Kirihara? One can consider this match a feeling-out process as well, as they’re set to team up on ChocoPro season finale in only a few days. 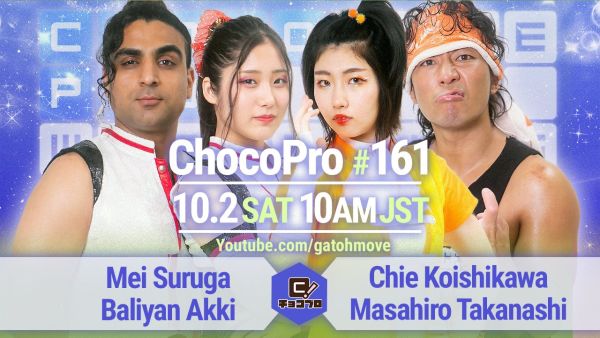 In what is essentially a preview of the ChocoPro season 9 finale, Best Bros will take on the makeshift duo of Chie Koishikawa and Masahiro Takanashi. It was recently decided, by Emi Sakura, that Mei Suruga and Baliyan Akki will defend the Asia Dream Tag Team Championship on ChocoPro #162. The teams they stand to contend with will be Egg Tarts, the duo of Koishikawa and Hagane Shinnou, and Takanashi and Hoshitango. Though this upcoming ChocoPro #161 match is a non-title affair, a victory for the opposing team is essential. When going into a championship match of any degree, momentum is key.

Despite being opponents on the ChocoPro season 9 finale, Koishikawa and Takanashi will have to work together here. This shouldn’t be a tremendous challenge for either, as this isn’t their only instance of teaming up. In October of 2019, they worked together in a six-person tag team match at a live Gatoh Move event. However, this is the first time they’ll work together in a standard two-on-two match. As stated earlier, a victory would provide them with momentum heading into the season finale. Overcoming Best Bros is a task many have attempted and failed; perhaps the energetic Koishikawa and seasoned Takanashi will fare better.

In what may very well be the most unexpected main event of season 9, ChocoPro #161 sees Gatoh Move’s “Beautiful Cosplayer” battle “The Calamari Catch King” himself. Sayaka has made the most of the season thus far, implementing her newfound hard-hitting, grueling approach in her matches. Though she’s currently known for her strikes, she’s also proven herself to be versatile, able to strike fast with dropkicks and apply submission maneuvers to boot. In a first-time singles encounter, she will go head to head with a man who has had an eventful few days in professional wrestling.

This past weekend, Chris Brookes fought in the main event of DDT’s Who’s Gonna TOP 2021 event. Brookes battled perhaps his fiercest opponent to date, as he challenged Konosuke Takeshita for the KO-D Openweight Championship. In a competitive encounter that ran just shy of 30 minutes, Takeshita retained his title. Post-match, however, Takeshita paid respect toward his challenger, saying that he belonged in DDT. Though there’s no doubt that Brookes will be back, his next stop will be Ichigaya Chocolate Square. A victory over a title contender the likes of Brookes would be incredible for Sayaka. Suffice to say, this will be easier said than done.