Grand Slam week in “The Big Apple” was four hours of pay-per-view-caliber wrestling action from the stars of All Elite Wrestling. Fans witnessed matches we thought we’d unlikely to see years ago. A dream match between “The Best Bout Machine” and “The American Dragon” tore the house down. In turn, it earned a 5-star match rating en route to a “Match of the Year” candidate. The Straightedge Legend was successful in overcoming the mastodon of Team Taz in his first televised match in over seven years. An AEW Women’s World Championship contest saw both competitors lay it all on the line. We’ve only scratched the surface of how monumental the past week for AEW has been and things are about to heat up once again for another edition of AEW Dynamite, serving as the fallout from Grand Slam.

On this week’s Dynamite, we will see “The Prodigal Son” of The Elite go mano a mano with AEW’s brightest young star. A women’s tag team match that involves a lot of animosities takes place this Wednesday night. Last, but not least, the TNT Championship will be on the line. As “The Redeemer” looks to strike down “The Spanish God.” There will be a lot more than that for fans to tune in for and you can take that straight to the bank. Because, “It’s Wednesday night, and you know what that means!” It’s time for some AEW Dynamite. Let’s run it down. 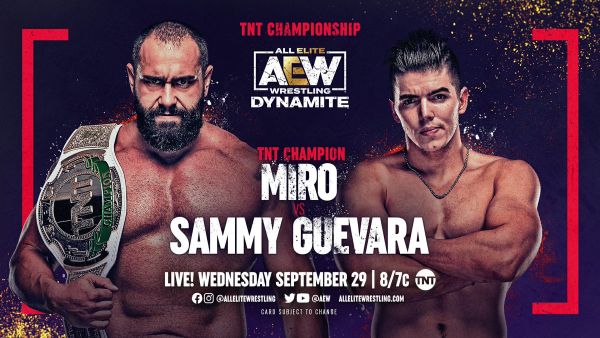 Miro has been running rampant over AEW since his debut last year. This beast has been nothing short of unstoppable on his way to winning the TNT Championship from Darby Allin. He has run over the likes of “The Murderhawk Monster” Lance Archer, Eddie Kingston, and, the ever-resilient Fuego Del Sol to further cement his stranglehold atop the TNT title scene as its undisputed champion.

Speaking of Fuego, the “Master of the Tornado DDT” has been a pain in Miro’s side for the better part of a month now. Del Sol’s “never give up” attitude proved to pester “The Redeemer.” Del Sol’s resilience and willpower earned him a TNT Title match on AEW Rampage a number of weeks ago, albeit, in a losing effort. The young star’s undying passion even earned him an AEW contract, despite losing the biggest match of his career. Not to be deterred, Del Sol came back for seconds only this time he put his new prized car for another shot at the champion.  Miro once again crushed that dream by decisively beating Del Sol yet again and taking his precious vehicle.

Sammy Guevera, Fuego’s best friend, has seen enough of Miro’s callous and brutish ways. Guevara wants to put an end to it and, in the process, capture the TNT Championship. Guevara laid down the challenge and, as everyone expected, Miro accepted. “The Spanish God” promised he will send “God’s Favorite Champion” crashing back to earth from the heavens as he takes his most prized possession away from him. This goes without saying, but Miro will not let that happen if he has anything to say and do about it. Guevara might be in for the fight of his life, but will surely trek a worthy journey through heaven and hell to achieve a lifelong dream of being a champion. Will Sammy Guevara finally stop this Bulgarian Bruiser or will Miro decides its game over once and for all? 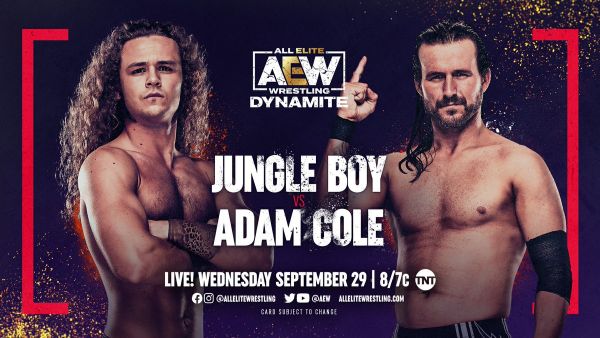 Since arriving in AEW back at All Out, it seems like Adam Cole has a bone to pick with the red-hot Jungle Boy. Cole would make an immediate impact by almost kicking Jungle Boy’s head clean off his shoulders upon his arrival. It all went ahead last week on the Grand Slam edition of Rampage. It was here we saw The SuperKliq beat the team of IMPACT Wrestling World Champion Christian Cage and Jurassic Express. Even with that momentous win, Adam Cole wants another shot at Jungle Boy. Surely, Jungle Boy wants a bit of revenge himself, especially after all the pain The Elite caused Christian Cage as well as all of Jurassic Express.

Two of AEW’s hottest stars today will go head to head in a match worthy of the main event on most pay-per-view events and we will all bear witness to it live this Wednesday night on AEW Dynamite. Will Jungle Boy find it in himself to massively handicap The Elite by taking out one of its many bright stars? Or will Adam Cole finish Jungle Boy off with a momentous boom? Find out this Wednesday night, during the fallout from Grand Slam, on TNT!