It has been a “Grand Slam” of a week for AEW after heading to New York for the very first time. Their shows inside Arthur Asche Stadium would be their biggest in history and it saw them build their cards as expected. While Dynamite was more of a one-match show, Rampage Grand Slam proved to be the best show from start to finish. Here’s a look at the results from the huge two-hour event.

CM Punk would have his first TV match in seven and a half years Friday night as he went one-on-one with Powerhouse Hobbs, a man who he’s been hoping to scrap with for some time now. Punk would dawn the signature trunks that many noticed were missing from his in-ring return, furthering the fact that he is back to please the fans and enjoy the moment. Getting down to the match itself, Hobbs and Punk worked the match you’d expect them to. After all, Hobbs should have the advantage due to his hulking strength and imposing stature. It was quite the change of pace for Punk seeing that he wrestled Darby Allin in his first match back.

Hobbs had a dominant offensive plan against Punk. It felt as though every time “The Best in the World” battled back, Hobbs would have an answer. The dominance was so impressive that Hobbs even hit his signature Spinebuster on Punk, getting the near fall of the match. Punk had to reach down into whatever he had left, bringing out his salute to Macho Man with a major diving elbow from the top rope. Hobbs would fall when Hook got involved. Punk managed to move out of the way after being held by Hook, seeing Hobbs crash into Tazz’s son. This would rattle Hobbs enough to allow Punk time to lift him up and hit the GTS for the pinfall.

These two men matched up better than anyone could have expected, furthering the fact that Punk still has it and Hobbs is one of the fastest rising stars in all of professional wrestling. 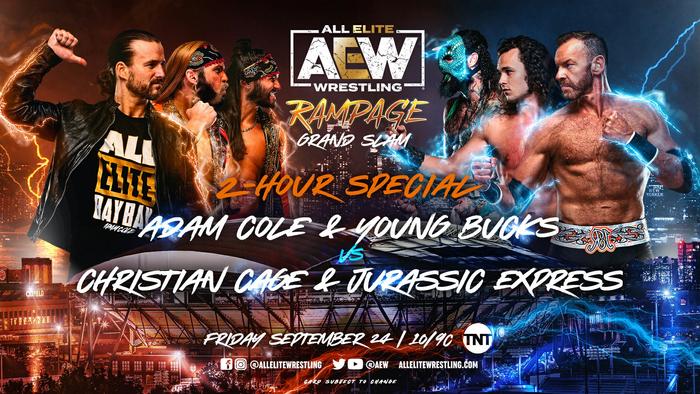 Everything about the SuperKliq being back in action for the first time in five years felt right here. A massive credit goes towards the team of Christian Cage and Jurassic Express as well seeing that this was only the second time they had ever teamed up. To try and sum up all the action would be nearly impossible seeing that The Young Bucks were involved, but what is worth talking about is the performance in this one by Jungle Boy. Despite the likes of Adam Cole and Cage being in this match, Jungle Boy continued his trend of standing out against the best of the best. At one point during the match, Jungle Boy would hit a Double Arm Drag from the top rope that would make Mayu Iwatani proud.

Fast forward, the SuperKliq made it a must to single out one competitor to break them down and win. They selected Luchasaurus, who had his own moments of excitement in this match. The Young Bucks would rid the match of Cage and Jungle Boy before dismantling the dinosaur. A Superkick by Cole would be followed by a Panama Sunrise. That would be followed by a skull-shattering BTE Trigger by Matt and Nick Jackson before Cole would finish the match with the BOOM knee to the back of the head (this is the new name for his previously named Last Shot finisher). The SuperKliq stood tall in the middle of the ring while Cole made it known that he still wants to show that Jungle Boy is all noise and nothing more.

A great match for the SuperKliq here as Trios Titles continue to be rumored and they become the instant favorites.