It’s time for the biggest puroresu tournament in all of professional wrestling. That comes in the form of G1 Climax 31, where 20 competitors will aim for an opportunity to main event Wrestle Kingdom like so many have before. Over the last two years, Kota Ibushi has shown the ability to outlast everyone in his quest to become champion. The tournament kicks off on G1 Climax 31 Day 1 as it will see the IWGP World Heavyweight Champion wrestle in the main event. Here’s a look at the card and what to expect from the five matches Saturday.

— A Block: Great-O-Khan vs. Tanga Loa

— A Block: Toru Yano vs. KENTA

The tournament will kickoff as the reigning winner Kota Ibushi will get the ball rolling. “The Golden Star” will face off with Yujiro Takahashi in his first match. All signs point to this being an easy win for Ibushi to get his tournament off to a hot start but who knows, perhaps Takahashi’s involvement in the House of Terror could help him deliver the biggest upset of the G1 Climax in match number one. This should be Ibushi’s match to win.

Here’s one of the more intriguing matches between anyone on Day 1 as The United Empire‘s Great-O-Khan will take on one-half of the Guerrillas of Destiny, Tanga Loa. Both of these two men enter their very first G1 Climax, so while anything can happen between these two, Great-O-Khan is far and away the favorite to win this and kickoff his rise to the top in what could be his own version of a breakout.

Will Toru Yano be able to stun KENTA before the tournament truly gets going? It surely does not sound out of the question. Yano, the ultimate spoiler, developed a whole new look in hopes of winning back his King of Pro Wrestling trophy from Chase Owens at Wrestle Grand Slam, leading him to be a bit different from his normal self. With that said, this is KENTA’s match to win. Losing is almost not an option for KENTA here as it could be what derails any thoughts he has of winning this tournament. Expect KENTA to get the win and start his climb to the top of the A Block.

When it comes to matches we have seen recently, this one is a matchup we have seen in various fashions over the past couple of months. With Tetsuya Naito and SANADA rivaling the Dangerous Tekkers, it has allowed both Naito and Zack Sabre Jr. to repeatedly battle and figure each other out. It hasn’t all just been tag team action either, as they had a singles match at Summer Struggle in Osaka back on July 23. Naito was able to get the upper hand in that one after getting dominated by Sabre Jr. from beginning to end. Sabre Jr. must keep his head on a swivel if he wants to avoid a loss this time around. When it comes to Day 1 action, this is far and away the biggest toss-up. 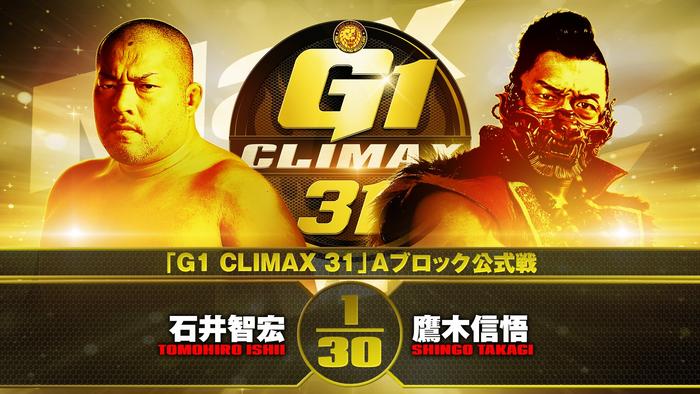 Often referred to as the G1 Climax MVP, Tomohiro Ishii will have the opportunity to start the tournament off better than ever before. He will go against IWGP World Heavyweight Champion Shingo Takagi in the main event of Day 1. If Ishii is able to pick up the upset, not only will he become a potential favorite at the beginning but seemingly earn himself a title match as well. Maybe the most interesting aspect of this tournament will be how Takagi does. It’s no secret that 2021 has been his year, yet he has never finished with more than eight points for his appearances in the G1 Climax. Even though he is the champion, this will be the year to show that “The Dragon” can be a true favorite in this round-robin fight of the fittest.