All Elite Wrestling celebrates a monumental milestone on this week’s latest edition of AEW Dynamite. The company’s flagship show will celebrate its 100th episode on the air on TNT. This is not an easy feat for a major wrestling promotion that just debuted two short years ago. But, with the help of every roster member in the back as well as its loyal fanbase, AEW has surely achieved something very special. They provided fans the necessary shake-up the professional wrestling landscape needed. The AEW Dynamite 100th episode is also the go-home show before AEW’s premier wrestling event, All Out. It will surely be a tension-filled and action-packed show for everyone to sink their teeth into before the big event.

A monumental rematch between two teams will be in play tonight, as they settle this blood feud once and for all. Speaking of grudges, “The Machine” has a score to even out against Team Taz‘s resident powerhouse. Not to be outdone, The Elite will be taking on the number one contenders and one of the hottest teams in AEW in an eight-man tag team free-for-all. All Elite Wrestling has more in store for their 100th episode of AEW Dynamite. You better drop that remote and keep your eyes glued to whichever devices you’re using. As we all know, “it’s Wednesday night and you know what that means!” It’s time for Wednesday Night Dynamite. Let’s run it down. 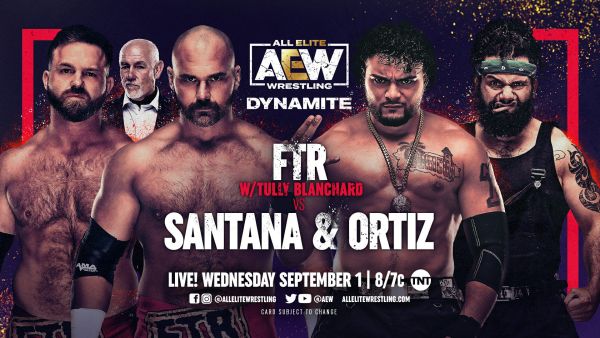 FTR and the duo of Santana and Ortiz have some unfinished business to settle. This rivalry has been boiling over for months and it’s finally at its fever pitch. The two teams squared off back at Fight for the Fallen in July, but with one major hiccup. Cash Wheeler, the partner of Dax Hardwood, suffered a gruesome injury that derailed the affair. FTR still managed to get a win but they still have a big chip on their shoulder. The old-school tag team does not want anything to seem like a fluke. Sure, they went away with the W, but they wanted to do it on their terms. They do not want to leave any doubt in anyone’s mind that they’re indeed the best tag team AEW has to offer. The premier duo of The Inner Circle has no problem fighting it out one more time.

This rematch will grant both teams redemption in two different ways. If FTR wins, they end this feud for good. However, if Santana and Ortiz win, it’s just another shot at FTR and The Pinnacle in this never-ending barbaric and bloody war between the two factions. Calling this rivalry personal is an understatement. If these two top-level tag teams had another opportunity to go at each other’s throats, by all means, they will take it. It gives the fans another grueling match to enjoy in this series. Once these two tag teams lock up, the proverbial gloves will definitely come off and there will be no holding back. This is war and we wouldn’t have it any other way. Will FTR finally close the chapter on this battle or will Santana and Ortiz just turn the page into another excerpt of this long-running fight?

Ahead of All Out, we shall witness a mini-preview of what’s to come inside a steel cange between The Young Bucks and The Lucha Brothers. Rey Fenix and his brother Penta El Zero Miedo survived a grueling tournament to be crowned the number one contenders for Matt and Nick Jackson‘s AEW World Tag Team titles. In the lead-up to the finals between Lucha Brothers and Jurassic Express, The Bucks would try to instigate a fight between the two teams, but to no avail. The two tag teams saw right through the treacherous tactic and decided to turn their attention to the champions instead. This ensured we had a finals matchup for the ages last week on AEW Rampage with both teams willing to duke it out at a hundred percent.

The match did not disappoint one bit, as The Lucha Brothers came out of the match beating the very game duo of Jungle Boy and Luchasaurus. This sets up the rage in the cage at All Out. It’s The Young Bucks versus The Lucha Brothers minus the underhanded tactics The Elite might try to employ, as they will be encapsulated in the unforgiving steel structure; nowhere to run and nowhere to hide. Before all that, The Young Bucks and The Good Brothers will be in action against both of the teams in the tournament finals. This will be a barn-burning experience as all four teams are considered the best that AEW has in their scorching hot tag team division. Will The Elite build momentum for the Bucks en route to their impending title defense? Or will Fenix, Penta, Jungle Boy, and, Luchasaurus be the adversaries that deflate the egos of The Elite before All Out?