ChocoPro #145 marks the season 9 premiere of the long-running wrestling show on YouTube. Last season saw many changes that will change the way in which Gatoh Move Pro Wrestling presents its programming. Most notably, Emi Sakura has departed for America, bringing Lulu Pencil along for the ride as her assistant. Though the show will be without their fearless leader, at least for a period, rest assured that ChocoPro will carry on. What can viewers expect as the show in question returns from its brief hiatus? Let’s run down the action set to take place. 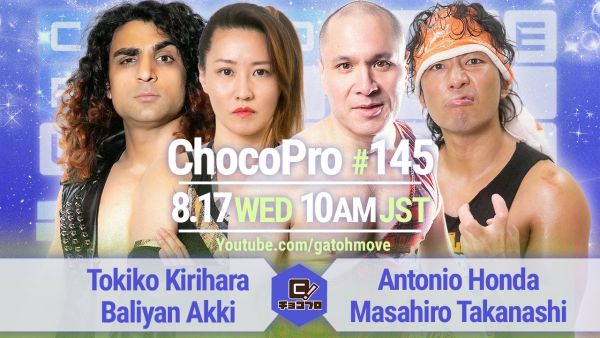 One of the preliminary matches of ChocoPro #145 will see tag team partners on opposite sides of Ichigaya Chocolate Square. Tokiko Kirihara, one half of Black/White Comaneci, will team with one-half of the Asia Dream Tag Team Champions, Baliyan Akki. Battling them will be the other half of the Comaneci duo, Antonio Honda, teaming with ChocoPro stalwart Masahiro Takanashi. It’s difficult to predict what the outcome of this match will be. However, it’s safe to assume that, given the involvement of Honda and, to a lesser extent, Kirihara, shenanigans will not be in short order. This may also be another match where the elusive Gon the Fox will make an appearance. One can only hope that demonic possession will be kept to a minimum here. 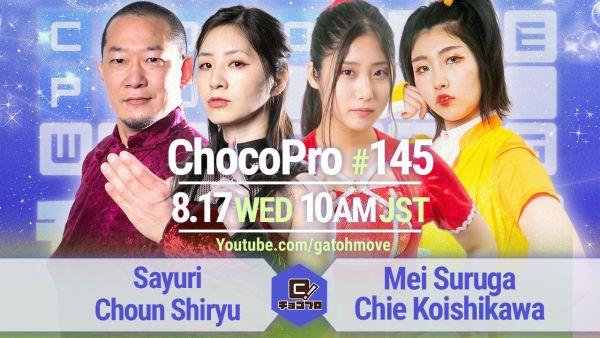 The tag team action continues on ChocoPro #145 as Dragon Ninja, the duo of Sayuri and Chon Shiryu, takes on Mei Suruga and Chie Koishikawa, the latter affectionately known as Warm Caterpillars. On the final episode of ChocoPro season 8, Dragon Ninja picked up an elusive victory, which was especially noteworthy given the lack of success they saw in the One of a Kind Tag League. On this show, Sayuri and Shiryu takes on one of the most energetic, albeit mischievous, teams in ChocoPro. Suruga, the other half of the Asia Dream Tag Team Champions, has teamed with Koishikawa on multiple occasions. Last month, on ChocoPro #138, they faced Shiryu and Masahiro Takanashi in a losing effort. Can Warm Caterpillars start season 9 off with a victory?

In the main event, Sayaka takes part in one of her biggest matches to date. Gatoh Move’s “Beautiful Cosplayer” has gained something of an edge during the previous season. One can argue that Minoru Fujita, the deathmatch-fighting Super Asia Champion, had a hand in this. After all, Sayaka and Fujita were paired off in the One of a Kind Tag League. Since then, Sayaka has been laying in her strikes harder, becoming that much more of a formidable opponent. Don’t let her sweet, soft-spoken demeanor fool any opponent; despite her inexperience compared to many of her peers, she can hold her own. For the first time, she takes on “The Oriental Doll,” Makoto.

Fans of joshi puroresu, specifically on the independent level, will undoubtedly be familiar with Makoto. From SEAdLINNNG to Actwres girl’Z to PURE-J and beyond, Makoto is among the most prominent wrestlers on the scene today. In SEAdLINNNG, she is currently one-half of the Beyond the Sea Tag Team Champions, an accomplishment she currently shares with friend and fellow Las Fresa de Egoistas member, ASUKA, otherwise known as VENY. Makoto’s last ChocoPro appearance dates back to episode #41, which took place roughly one year ago. On this episode, she teamed with former wrestler Mitsuru Konno in a losing effort against Hanako Nakamori and Ryo Mizunami. Tune into ChocoPro #145 to see if Makoto can make things right with a singles victory.