After 16 months of empty arenas and over a year of the ThunderDome, Friday Night SmackDown is once more in front of a live audience – the long-anticipated return of the fans has arrived! Much has changed since the last time SmackDown was in front of a crowd. Goldberg was the WWE Universal Champion and feuding with the now-departed Braun Strowman; Otis, then the lovable oath, was courting Mandy Rose; Bayley was still SmackDown Women’s Champion and John Cena, who has been off TV for well over a year now, was embroiled in a hot rivalry with The Fiend, Bray Wyatt. It is arguable that SmackDown is, ironically, in a better place now than it was pre-pandemic. Tonight, we will find out exactly how crowds will react to the likes of Tribal Chief, Roman Reigns; Women’s Champion, Bianca Belair and the newer, nastier, clean shaven Otis. This is also the go-home episode of SmackDown ahead of this Sunday’s Money in the Bank pay per view, so let’s jump right in to the preview!

If you want to welcome back fans in style, this is a sure way to go about it. Each of these men – Kevin Owens, Big E, Seth Rollins and King Shinsuke Nakamura – are among the best SmackDown has to offer. Each of them are, also, involved in the men’s Money in the Bank ladder match this Sunday. Kevin Owens has not held a world title in nearly five years and is well overdue a second reign – he surely hasn’t forgotten how he was robbed by Roman Reigns early into the year. Shinsuke Nakamura, now a King, is yet to hold world championship gold on the main roster and now that he has momentum on his side, there is no better time to become Mr Money in the Bank. Seth Rollins, a seasoned WWE veteran, will want to add another accolade to his distinguished list of trophies. Big E is widely tipped by many to be the one to eventually dethrone the Tribal Chief; could this be the beginning? Whoever wins this match will no doubt become the favorite to win the briefcase this Sunday and Roman Reigns and Bobby Lashley, respectively, will be watching.

This week’s SmackDown sees Bianca Belair defend her SmackDown Women’s Championship against Carmella. It is of grave misfortune that Belair’s original opponent for Money in the Bank, Bayley, has suffered an injury. The two women, who have been involved in a nasty rivalry for months now, were set to have an I Quit Match this Sunday; the presumed blow-off to their feud. Instead, Belair is without an opponent this Sunday and finds herself facing Carmella tonight. Carmella is a worthy adversary; a good heel and deserving of a higher spot on the card. Will she make the most of tonight’s opportunity? Tune in to find out.

Edge & The Mysterios vs Roman Reigns & The Usos 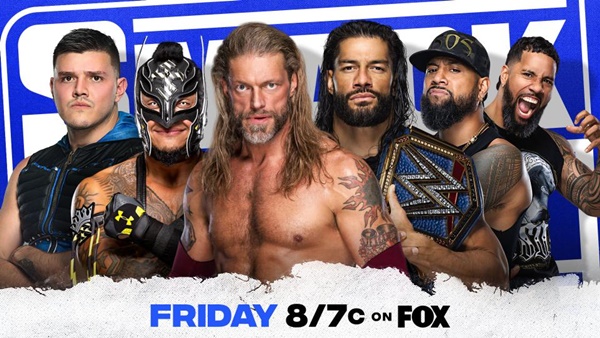 Before Edge returned to rival Roman Reigns a few weeks ago, Roman had brutalized The Mysterios (Rey and Dominik Mysterio). He had vanquished Rey in a Hell in a Cell match on SmackDown; he had demolished Dominik one week prio – launching him over the top rope with an almighty powerbomb. Now, he has united The Usos (Jimmy and Jey) behind him; the Roman Reigns family – now being referred to as The Bloodline – unified with Roman as the Head of the Table. Rey and Edge have a history; though long-time rivals, they are also long-time allies, dating back to the early 2000s. They have always been capable of coming together to fend off great evils and this incarnation of Roman Reigns is precisely that. When these six men meet in the ring tonight, it will be a bloody, personal battle in the war likely to culminate at Money in the Bank this Sunday. Tune in to SmackDown at 8/7c EST on FOX to catch the action.