Before The Client List is an extension of our ongoing series, “Before They Were Famous“, which looks at wrestlers before they became internationally famous. In this series, we will look at some of pro wrestling’s greatest and most well-known managers and/or valets, but explore their prior career as an in-ring professional wrestler. For the first installment, we look at one of the most iconic villains in pro wrestling history – as both a wrestler and a manager – in “Classy” Freddie Blassie.

“You pencil neck geek!” For those who were brought up on pro wrestling in the 1980s and 1990s, one of the most colorful managers of the day was WWF stalwart, “Classy” Freddie Blassie. A gifted gabber and a splashy dresser, Blassie guided The Iron Shiek to the WWF World Heavyweight title in 1983, Iron Sheik and Nikolai Volkoff to the WWF World Tag Team titles, as well as managing such clients as Adrian Adonis, Jesse “The Body” Ventura, Kamala, Hercules Hernandez, and even Hulk Hogan during his first stint in the WWF. But for nearly 40 years, Fred Blassie was an in-ring talent who ruled the West Coast, a multi-time World Champion, and one of the most feared villains in pro wrestling history. Here’s a look at “Classy” Freddie Blassie’s wrestling career, long before he decided to take on clients and become one of the most iconic managers of the 1970s and 1980s. 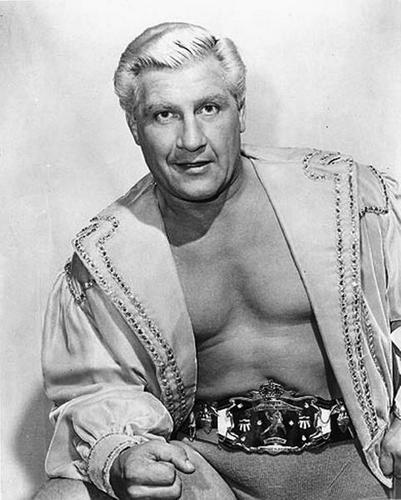 A child of two German immigrants, Freddie Blassie was born in St. Louis, Missouri in 1918. At an early age, Blassie was enamored with pro wrestling, particularly the “shooters” of the early era of pro wrestling in the 1930s, and would often sneak into a local gym to watch the technical masters stretch and submit their opponents. In order to impress a girl, he entered a carnival show match in a shoot fight and won. He was now hooked, and he decided that pro wrestling was his destiny and not his backbreaking work in the meatpacking plant. He began wrestling professionally in 1935 and it was soon after that he came up with his famous “pencil neck geek” insult. He was feuding with a wrestler known as “The Geek” who had a neck “like a stack of dimes”, making him a literal pencil neck geek. The terminology would follow him for the rest of his career. He spent his time in the Missouri territory, working mainly in St. Louis and Kansas City, but when the U.S. entered the Second World War, he enlisted in 1942 and joined the U.S. Navy, where he spent four years (42 months) in combat in the U.S. battles in the Pacific. As a German descent American, he was often faced with questions of loyalty, despite marrying a Jewish woman. His eagerness to learn from 1935 to 1942 led to many of the circuits top stars sharing knowledge with Blassie, and when he returned home to the U.S. in 1946, he was determined to make an honest run as a professional wrestler.

Despite being a 7-year pro before his duty in World War II, Blassie was still a journeyman. Upon his return to the U.S. and the pro-wrestling circuit full time in 1946, he was repackaged by promoters as “Sailor” Freddie Blassie, as promoters looked to capitalize on U.S. patriotism following the war. Sadly, the gimmick was a bomb, and Blassie jumped around territories, including working in New York City for Jess McMahon (grandfather of Vince McMahon Jr.). In 1950, he had his first challenge for the NWA World’s Heavyweight Championship, facing champion Lou Thesz in Kentucky. By 1952, Blassie was getting disillusioned by the East Coast and headed for California, although he did still work for various NWA territories in the South, particularly Georgia Championship Wrestling (GCW). It was in the latter that he decided to embrace his villainous side, bleaching his hair blonde like Gorgeous George. He also began filing his teeth, transitioning from “Sailor” to “The Vampire”, as his spiked teeth became effective tools in biting his opponents, creating a macabre presentation and early influence on the hardcore side of pro-wrestling. 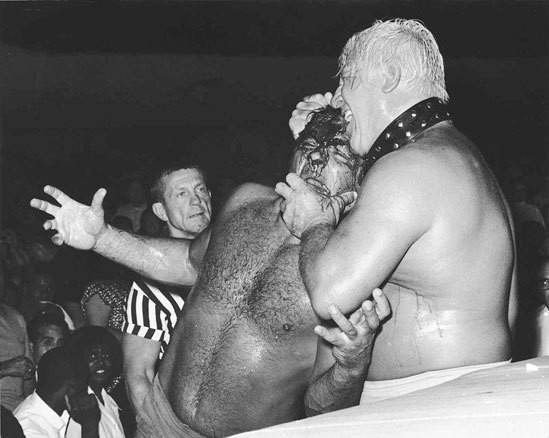 In 1960, he became a regular with World Wrestling Associates (WWA) in Los Angeles, a move that would cement his legacy in pro wrestling, long before he became a manager. In 1961, he defeated Eduoard Carpentier for the WWA World Heavyweight Championship, a title that held prominence in the pro-wrestling world, since WWA was an outlaw territory outside the realm of the National Wrestling Alliance (NWA). During his time on the West Coast, he was a frequent guest and/or interruption on a local show hosted by Regis Philben, and Blassie’s appearances – thanks to his massive appeal as a wrestling draw – helped push Philben into a national celebrity. He held his WWA World title for 289 days and thanks to WWA’s alliance with Japan, in particular the Japan Wrestling Alliance (JWA) headed by puroresu icon Rikidozan, Blassie would not only help introduce Japanese pro wrestling to the U.S. market but help validate it in Japan as well.

In March of 1962, Blassie lost the WWA World title to Rikidozan, and for the next four months, Blassie competed in Japan, determined to regain his title from the Japanese wrestling innovator. He finally defeated Rikidozan and won back his title – at a WWA event in Los Angeles – but it had served his purpose. It made Japanese wrestling a commodity on the West Coast and had given Rikidozan the credibility of conquering America. Blassie would continue to make his titles make history – in 1963, he lost to Bearcat Wright, making Wright the first African-American to hold a World title in the United States. As much as governing body politics held back minorities, the wrestlers themselves had even more power. If they refused to drop a title, it didn’t matter what the bookers thought. Blassie was more than willing to let the talented Bearcat Wright take the gold and make history.

In 1964, Blassie once again captured the WWA World title for the third time (again from Carpentier), but upon losing to Dick The Bruiser in April, he headed to the newly minted World Wide Wrestling Federation (WWWF). Still claiming to be the “West Coast Champion”, entered into a feud with Bruno Sammartino to unify the titles. Despite Blassie not actually holding any titles to “unify”, his feud with Sammartino saw Bruno become a national hero, but in the process, Blassie became lifelong friends with another WWWF employee, Gorilla Monsoon. Despite that, Blassie ended the year by leaving WWWF and returning to Los Angeles and the WWA.

Returning to the WWA, Blassie began feuding with the likes of Bobo Brazil, Mil Mascaras, and others, as well as teaming with another known violent savage, Mad Dog Vachon. He became less the focal point of WWA, and soon began working more NWA territories, as he spread his wings into “enemy” territory. By 1968, WWA rejoined the NWA, becoming NWA Hollywood, but in 1971, Blassie returned to WWWF and challenged new WWWF World Champion Pedro Morales, to no avail. He would become a frequent foe of Morales throughout the rest of his in-ring career in WWWF. Ironically, during his WWWF stint, he was managed by another former wrestler who had recently become a manager, in the form of Captain Lou Albano. In 1972, ten years after his last match in Japan with Rikidozan’s JWA, he returned to Japan and began working for Giant Baba’s All Japan Pro Wrestling (AJPW). He returned to AJPW again in 1973, but the following year in 1974, he jumped to New Japan Pro Wrestling (NJPW) for his final tour of Japan. That year, Blassie was forced to retire from in-ring competition, as a California by-law forbade wrestling licenses for anyone upon reaching 55 years old. But while his US in-ring career ended (while still working for WWWF), he remained employed by WWWF and became a manager instead. After a 39-year in-ring career in the sport, Blassie retired as a wrestler as a 4x WWA World Heavyweight Champion, a 17x NWA Georgia Southern Heavyweight Champion, NWA Junior Heavyweight Champion, as well as dozens more regional titles in multiple NWA territories.

And the rest, as they say, is history.