The official AEW rankings for June 23, 2021, are now live and feature some shocking changes following a rather lowkey week for the top contenders of AEW. With an AEW World Championship match coming this Saturday, next week should feature even more change than the past few. Here are the AEW rankings.

The men’s rankings for this week saw some major movement as Darby Allin‘s handicap loss to Scorpio Sky and Ethan Page knocked him from number three down to number five. This allowed both Orange Cassidy and Powerhouse Hobbs to move up. This week on Saturday Night Dynamite, No. 2 Hangman Page will face No. 4 Powerhouse Hobbs while AEW World Champion Kenny Omega faces the No. 1 contender Jungle Boy. Next week’s top five is going to take a major hit. 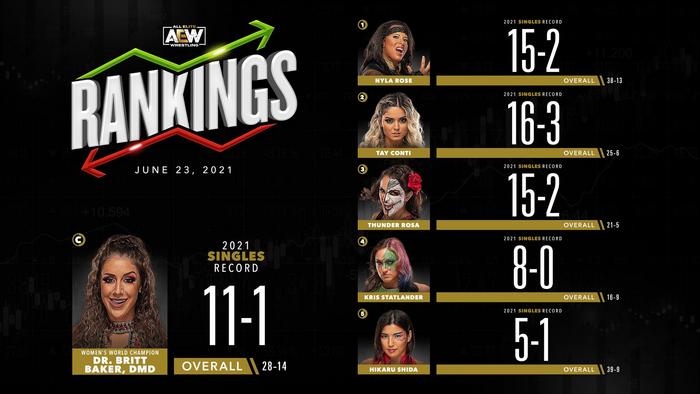 The only movement in the women’s division this week saw Kris Statlander jump over former AEW Women’s Champion Hikaru Shida, as Statlander was able to pick up another win to move to an undefeated 8-0. She could have a title opportunity on the horizon if she keeps this going. 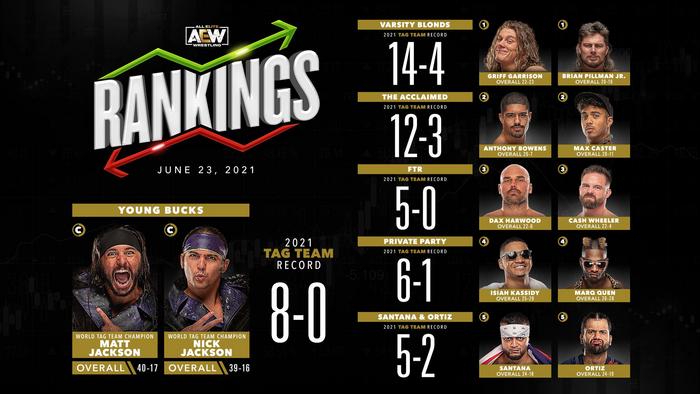 For the third week in a row, the only change was Private Party and FTR switching places as this week saw FTR pick up a win while Private Party did not compete on any of AEW’s three shows. With FTR vs. Santana & Ortiz coming soon, it is likely that the tag team title picture could have some major change in the coming weeks.