Friday Night SmackDown returns once more! On last week’s show, Roman Reigns absolutely demolished Dominik Mysterio – with the junior Mysterio feeling the full wrath of the Tribal Chief in a brutal display of what Roman is capable of. It no doubt sent a message to anyone – especially the dissenting Jimmy Uso – willing to question the dominance of the Head of the Table. This week, WWE have just the one match advertised as taking place but, as always, we will offer our thoughts on what to expect. Let’s begin!

The Street Profits vs Alpha Academy

The Street Profits (Angelo Dawkins and Montez Ford) are in a bit of a slump. Excluding a victory they achieved with thanks to Bianca Belair on the April 30 edition of Friday Night SmackDown, the duo are without a win dating back to February. Yikes. Considering they are a popular and talented, natural tag team, this is a shocking statistic. Excluding one victory they achieved when teaming with the Dirty Dawgs (Dolph Ziggler and Robert Roode), Alpha Academy (Otis and Chad Gable) are without a win since March. Clearly, SmackDown’s creative need to do something more with both teams, as they are key players in the division. Unfortunately, a win for either side will be at the expense of another team that desperately needs it. Hopefully, we will see at least one of them kick-start a momentous run – one which catapults them back to where they need to be. Hard to predict, but we are going with the Street Profits. 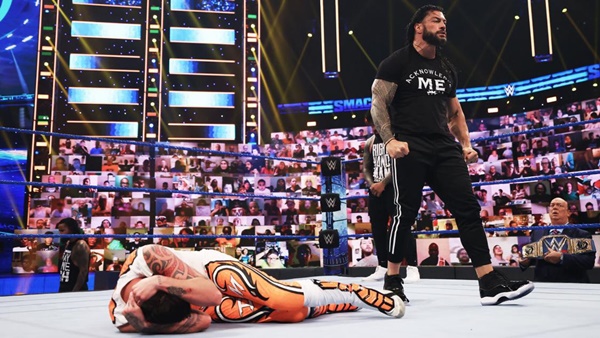 You don’t touch another man’s son. Last week, Roman Reigns did just that when he brutalized poor Dominik Mysterio. WWE are teasing that, this week, Rey Mysterio will be seeking revenge – the “Ultimate Underdog” promising vengeance will be delivered. This is a welcome, new story to SmackDown, as Mysterio and Reigns have not really crossed paths that often during their time in the WWE. In fact, they have never wrestled one-on-one. This is shocking as they are, indeed, a perfect fit for one another. Rey as the perennial, ultimate babyface underdog and Roman as the dominant, despotic, destructive force tearing his way through the SmackDown roster. Their fates will entwine soon and it will likely have disastrous consequences for the Mysterio patriarch. For now, however, expect Rey to act on his promise to attack Roman Reigns.

NO MORE WAITING! 🚪#DingDongHello is BACK on #SmackDown as @itsBayleyWWE welcomes very special guest…the King of Drip Style @WWERollins!

What happens when you put two of SmackDown’s best on one talk show? Likely some great entertainment. Two of WWE’s most notorious laughers and top heels Bayley and Seth Rollins will talk on “Ding Dong, Hello.” The types of interactions between these two should be nothing short of entertaining as Rollins finally has the interview he has been wanting.

– Last week, Bayley taunted Bianca Belair – going so far as to (somehow) possess all the screens in the WWE ThunderDome. Belair will no doubt retaliate this week.

– No two men have paths as connected as Sami Zayn‘s and Kevin Owens‘. Following Owens’ defeat to Intercontinental Champion, Apollo Crews, Owens was attacked by his former best friend/former best enemy, Sami Zayn. Owens will be demanding answers this week.

– What is next for the brilliant Uso storyline? Maybe tonight we can find out more.