ChocoPro #125 is set to be a one-match show, but what a match it will be, as Mei Suruga heads into perhaps the most important battle of her young career. As one-half of the Asia Dream Tag Team Champions, “Mei-chan” will be looking to secure singles gold as she takes on a deathmatch veteran. What will come of this match? More importantly, can Suruga bring Gatoh Move Pro Wrestling‘s singles title back to the little promotion? Here’s what to expect heading into this upcoming episode of ChocoPro. 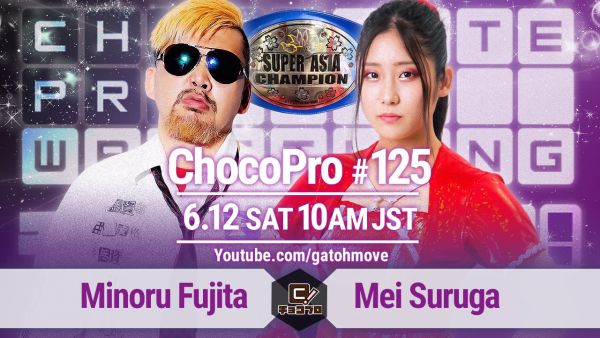 On ChocoPro #123 – another one-match show, ironically enough – Best Bros defended the Asia Dream Tag Team Championship against the team of Minoru Fujita and Rina Yamashita. Despite being up against formidable opponents in “Tag Team Destroyers,” Mei Suruga and Baliyan Akki were able to emerge victorious. In fact, it was Suruga that got the pinfall victory, catching a weary Fujita to do so. Pinning the current Super Asia Champion was no small feat and Gatoh Move’s “Big Apple” knew this as well. Post-match, she expressed her new goal: to win the Super Asia Championship.

Suruga knew there was one more title that she had yet to win, and if she wanted to be the “Ace” of Gatoh Move, she needed to hold the promotion’s only singles title. Fujita noted this as well, inviting Suruga to take him on for the belt. Gatoh Move founder Emi Sakura asked Suruga when she would be ready to challenge for the Super Asia Championship. In Suruga’s words, she was “perfectly ready,” wanting to challenge Fujita right then and there. Sakura denied this request; instead, she set the match for ChocoPro #125.

He won the newly-revived title on Day 2 of ChocoPro #100, besting Baliyan Akki in the main event to do so. Until this point, the title had been inactive, with its only champion being current All Elite Wrestling star Riho. Since winning the Super Asia Championship, Fujita has been on a wild journey, whether it was holding titles from other organizations, wrestling in various deathmatch stipulations, or working alongside his fellow Pencil Army soldiers. To successfully retain his Super Asia Championship on ChocoPro #125, Fujita will have to be at the top of his game.

It’s important to note that this will also be Suruga’s first Super Asia Championship match since 2019. In June of said year, she unsuccessfully challenged then-titleholder Riho. At this point, Suruga had only a little over one year of wrestling experience. Since then, she blossomed into one of Gatoh Move’s featured stars. She won tag team gold and competed everywhere from Tokyo Joshi Pro Wrestling to AEW and beyond. Suruga will enter ChocoPro #125 a more experienced wrestler. Can she thwart Fujita, becoming only the third-ever Super Asia Champion? Tune into the official Gatoh Move YouTube channel to find out.