On Sunday night, five men will enter into the main event of NXT TakeOver: In Your House with a determination to walk out NXT Champion. The five men are champion Karrion Kross, Johnny Gargano, Kyle O’Reilly, Pete Dunne, and Adam Cole. It’s an impressive lineup of NXT’s best. Kross is taking on a lot more than he may be able to handle, as the undefeated champion was rattled by Cole on NXT one week ago to make this match official. Cole now has a chance to take back the championship he held for a record 396 days. Not only does he have the chance, however, but he should be the man to win on Sunday as part of a bigger and better story.

Adam Cole Should Become NXT Champion Once Again This Sunday

Perfect Opportunity to Dethrone Karrion Kross Without Pinning Him

Karrion Kross is the first wrestler since Aleister Black to have this serious of an aura around him. And it feels as though it may not be ending anytime soon. That doesn’t mean he has to be champion the entire time. When Adam Cole got into the face of Kross, he made it very clear that he believes NXT does everything to make Kross special while all they have to do with Cole is to ring the bell. That’s rather important, as it could go into Sunday as what sets them apart in the end. The beauty of such a major match with five men competing is that Kross does not need to be pinned to lose the gold. When it comes down to it, that’s exactly what should happen.

But it shouldn’t just be anybody. It has to be Adam Cole. Cole not only should put his money where his mouth is but slight Kross in the process. Whether it’s Kross hitting the Psuedo Suplex or nearly putting someone to sleep, Cole has to steal the victory. It’s part of a bigger picture, one that NXT is clearly telling with how they are planning this match. Cole is the man who should walk out as champion with the opportunity to run back him vs. Kyle O’Reilly once more. This time, with the prize on the line.

Cole vs. O’Reilly Part II: This Time For The Gold 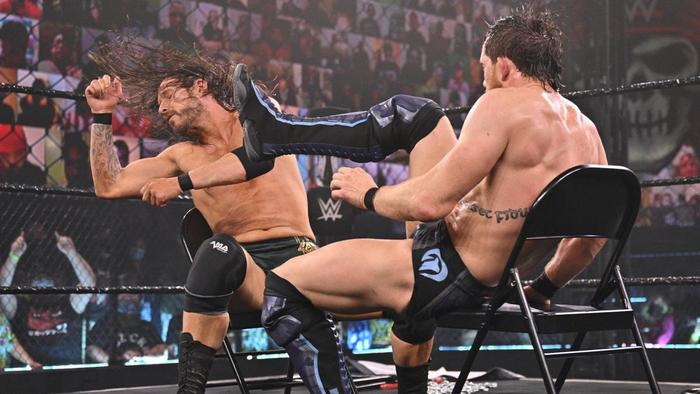 The seeds have been planted for Cole vs. O’Reilly Part II already. Not only was his attack during the number one contender’s triple threat originally on Kyle O’Reilly, but neither has stopped paying attention to each other. The interview that Cole had following his loss at NXT TakeOver: Stand & Deliver was one that O’Reilly was seen watching. He hasn’t instantly forgotten what they went through, but rather his eyes are on the prize that means the most to Cole. We have an idea of how much that title means, seeing that Cole broke up The Undisputed Era strictly because of that championship. As they enter Sunday, they will compete against one another and likely face-off at one point during the match. It feels almost perfect for Cole to get back at O’Reilly and steal the title from his grasps.

Their destiny is to face off again in singles action. And the title being on the line is only step one. The second step? Kyle O’Reilly defeated Adam Cole to become NXT Champion. That’s the best possibly told story of this feud. Cole getting the title back just for O’Reilly to take it from him down the line would feel right and only add to the huge win that many believe O’Reilly will have down the line. “Cool Kyle” would still get a massive win if he were to defeat Karrion Kross straight up, but it wouldn’t have nearly the same effect. To solidify the story being told between Cole and O’Reilly, this is the only result that makes sense. Sunday, Cole walks out as champion while O’Reilly was seconds away. And down the line, O’Reilly gets his revenge to finally become NXT Champion.

A story that writes itself.

A Proper Goodbye For Adam Cole 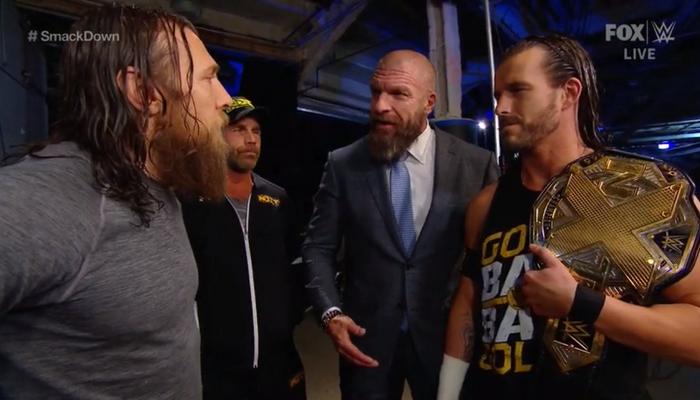 Adam Cole very well can be considered NXT’s greatest superstar. With that being said, he should receive a proper goodbye from the brand. In the past, all NXT’s greats have tended to go out in a meaningful fashion. Finn Balor exited after a major NXT Championship loss as “The Demon.” The same goes for Shinsuke Nakamura. Sami Zayn had an incredible match with Nakamura as his last in NXT. Asuka‘s was unprecedented as she relinquished the NXT Women’s Championship after her record run. Sasha Banks moved on following her Ironwoman match with Bayley. So many of the greats leave in the best of terms. Many believed that Cole’s loss to O’Reilly at NXT TakeOver: Stand & Deliver would be that for him, but he remains determined to get his title back once more.

So if that is the case, winning it back just to lose it to Kyle O’Reilly seems like the proper goodbye for one of NXT’s true greats. It’s likely that Cole is headed for the main roster by year’s end, seeing that he has accomplished everything that there is to be accomplished on the NXT brand and more. His clock is ticking and his star power is needed on Raw or SmackDown. The perfect departure is to go out on his back as he loses the title to O’Reilly. It not only feels right but would be the perfect conclusion to his NXT career.