Friday Night SmackDown is almost here! In a breakaway from recent tradition, we even have not one, but two matches to preview. Christmas in June? Why not! The Intercontinental and SmackDown Tag Team Championships are both being defended on an episode of SmackDown sure to deliver. Don’t believe me? Then let’s take a look and see what’s on offer.

On last week’s episode of the blue-branded grappling extraordinaire, Kevin Owens was seconds away from overcoming Apollo Crews and capturing the Intercontinental Championship. Owens needs this, of course, with months of feuding with Tribal Chief, Roman Reigns bringing so many defeats that a big title win would be a sound bounce-back. He hit the champion with the Stunner, so of course it looked as though he would win. Unfortunately for Owens, Commander Azeez (what exactly does he command?) hit the Canadian with the devastating Nigerian Nail, which brought about a disqualification victory for Owens. Which means, of course, he did not win the title. This week, Owens has a shot at redemption – with the Commander (maybe he commands attention?) being barred from ringside, meaning that unless Apollo has a General or Colonel Azeez hiding under the ring, his title reign is in jeopardy. It feels as though Apollo will retain somehow, so perhaps someone other than Commander Azeez will interfere, as he is the only one barred. Tune in to SmackDown to find out.

SmackDown Tag Team Championships: The Mysterios (c) vs The Usos 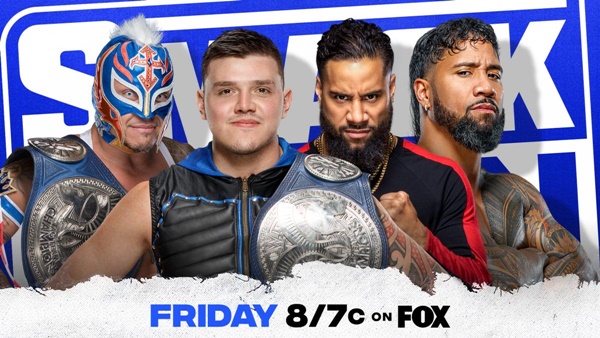 Last week, The Usos (Jimmy and Jey) reunited to overcome the Street Profits (Angelo Dawkins and Montez Ford). They put the SmackDown tag team division on notice: the guys who have (maybe) established themselves as the greatest tag team in SmackDown history are back. In overcoming the Street Profits, they have earned the right to challenge for the SmackDown Tag Team Championships, currently held by the father-son-duo of Rey and Dominik Mysterio. The Mysterios are doing a decent job in building interest in the division – with the improvement of Dominik every week being a particular highlight. Though Rey is a physically small man, he casts a giant shadow and has left Dominik with some pretty giant shoes to fill, also. There is no better way for the young Mysterio to develop than to team with the patriarch. The Usos are, of course, in the middle of family turmoil – and Head of the Table, Roman Reigns, is not happy about Jey teaming with Jimmy again. Reigns fears that Jimmy will convert his brother, Reigns’ “Right Hand Man”, back to the side of the angels. This title match is difficult to predict. It could quite easily result in an Uso win which prolongs the Tribal Chief story, or they could self-destruct – with Jey turning on Jimmy. What’s certain is that the result will be fascinating. The match should be pretty good too, so tune into Friday Night SmackDown on FOX to catch the action!

– Poor Big E. After entering a potentially game-changing feud with Aleister Black, the latter was announced as part of the recent set of WWE releases. Where does Big E go from here? Hopefully we find out tonight.

– Last week, Seth Rollins took control of the ring in Cesaro‘s absence – even serenading himself with a Happy Birthday tune. Expect Cesaro to give Rollins some belated birthday bumps tonight.

– Shinsuke Nakamura once again, with the help of Rick Boogs, stole King Corbin‘s crown. Maybe this is the week Corbin gets an advantage?

– Bayley will continue her feud with SmackDown Women’s Champion, Bianca Belair. Both women are quietly enjoying an entertaining feud, which will continue to deliver excellent matches.

Dark Side of the Ring: Grizzly Smith – What We Learned
Vince McMahon Not “Getting” Aleister Black Is A Problem