On December 2, 2020, Kenny Omega defeated Jon Moxley at All Elite Wrestling’s terrific Winter Is Coming show. His victory saw him turn full heel, side with Don Callis and begin the ground-breaking All Elite Wrestling/IMPACT Wrestling partnership. From here, we have seen Omega gain more and more belts in the wrestling world. He already had the AAA Mega Championship and now he holds a total of four key belts. His latest came from defeating Rich Swann at IMPACT’s Rebellion show.

The “Belt Collector” Gimmick is brilliant. It meshes very well with his style of wrestling, his current persona and his relationships within AEW. It is safe to say that Omega is at the center of a seismic shift in the wrestling landscape. His excursions to Impact and to AAA mean that he is likely to show up in other promotions as well. Ring Of Honor, Major League Wrestling (MLW) and New Japan Pro Wrestling (NJPW) are all options for the “Best Bout Machine”, however perhaps his sights should be set on the NWA.

Even now, still chosen as #1 foreigner of all time… I carry that pride and responsibility with me everywhere I go. (Along with a bunch of title belts) https://t.co/moKGAw5luT

The NWA Worlds Heavyweight Championship is arguably the most prestigious belt in professional wrestling; originating in 1948 and having been held by wrestling legends such as Lou Thez, Harley Race and Ric Flair. Those are just three names but they are intrinsically linked with that belt. The championship has the kind of prestige that isn’t seen in pro wrestling today. Even the WWE Championship has been disrespected time and time again.

The belt debuted before Vince McMahon had a monopoly on the wrestling industry. It is a throwback to an older generation, more specifically, that of the territory system of the ’60s and ’70s. Currently held by Nick Aldis, the NWA Worlds Heavyweight Championship represents the history of professional wrestling. It is a staple of professional wrestling and an accomplishment for any performer who steps between those ropes.

NWA Power is a weekly episodic piece of wrestling television. The grand stories, the great promos and, most importantly, good ol’ fashion wrestling. This presentation is a throwback to the style of wrestling that was around in the territory system. It was a very ground based style with lots of throws, submissions and ring psychology. If you follow FTR in AEW, they demonstrate the perfect wrestling style.

Sure. The NWA has evolved its style along the way with additions like Thunder Rosa and Da Pope, but this style is very prominent in a lot of NWA matches. Take Trevor Murdoch. His babyface, family-man swagger would slot perfectly into the main event of an 80s pro wrestling show.

Kenny Omega Is The Antithesis Of Wrastlin’

Kenny Omega really came into prominence in the late 2010s. His bouts in Japan with Kazuchika Okada are the stuff of wrestling legend. He has broken Dave Meltzer’s star ratings numerous times, which has led him all the way to North America and the formation of All Elite Wrestling. Perhaps the most distinct element of Kenny Omega is his style. He is fast paced, high flying and can go from 0-60 in a flash.

This wrestling style is something that isn’t too prominent in the NWA and could actually make for a great dynamic within the company. Not only would you have an invading force entering the promotion to usurp Strictly Business, but there would also be a clash of style. The Super Elite would fit perfectly on NWA Power. Their wacky, exuberant performances fit within that throwback style.

The matches would be the most interesting aspect. Seeing Kenny Omega fly around an NWA ring with the likes of Trevor Murdoch and Nick Aldis would be insane. Aldis already has history with certain members of the AEW roster, so he seems a natural fit for this kind of storyline. 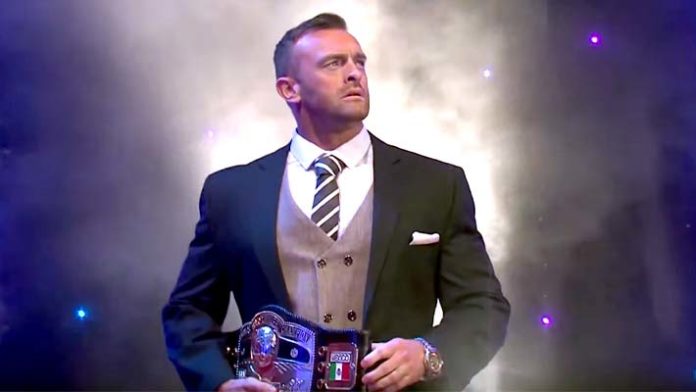 With NWA’s When Our Shadows Fall right around the corner, it is up in the air if Nick Aldis will retain his championship. There is every chance Trevor Murdoch could dethrone Aldis to become the new face of the NWA. That being said, the story is there with Aldis and Kenny. Both men are the leader of strong factions, they both hold the top championship in their respective companies and they both have similar ideologies regarding pro wrestling.

Aldis and Omega both love to win. They both want to be the best, however they differ in one significant way. Aldis values his belt above all others, whereas Kenny needs every single belt to feel validated. These two monsters of the industry could clash in the foreseeable future and with Kenny on one of the hottest streaks in modern wrestling, he needs to defeat Aldis. Having Aldis be deflated after his loss would further his character while Omega’s victory would substantially elevate his Belt Collector Gimmick.

Simply put…Kenny Omega Should win the NWA Worlds Heavyweight Championship. Omega is a megastar at the moment and his act is one of the hottest in the world. Now is the time to strap the rocket to this gimmick and have him win every single belt he possibly can. This would not only be a fantastic move for Kenny Omega but it would be a great move and piece of publicity for the NWA as a whole.