Since the start of the Women’s Revolution in WWE, fans were clamoring for the introduction of a tag team division. It seemed at the time that the roster was deep enough and it could make for a new interesting dynamic on the main roster. Spearheading this movement were Bayley and Sasha Banks, two superstars who have worked hard to establish the women’s division in WWE. Now that we finally have the WWE Women’s Tag Team Championship, how have the titles held up? 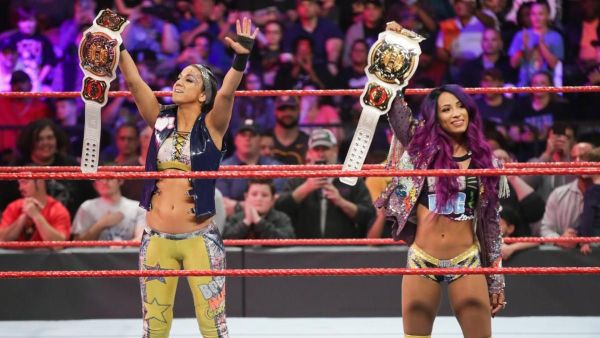 The Botched Announcement of the WWE Women’s Tag Team Championship

On the December 24th edition of Monday Night Raw, Vince McMahon took to the screen dressed as Santa Claus and dropped the bombshell that WWE would be having Women’s Tag Belts. From the offset, these belts were hindered. Instead of having a prestigious announcement akin to the Universal Championship, we got Vince McMahon dressed as Santa.

An inaugural champion can make or break a belt. If the champion isn’t credible, the belt isn’t credible, simple as that. Picking Bayley and Sasha Banks to be the first WWE Women’s Tag Team Champions was the best decision the company could have made. Despite the fact that their NXT history was only referenced passively, this was a great step forward for the division. Acting as ambassadors, The Boss ‘N’ Hug Connection even took the belts for a very brief run in NXT. This established that the belts were to be defended across all three brands. Raw, SmackDown and NXT. Again, Bayley and Banks were the perfect choices to take the belts to Full Sail University. Two homegrown NXT talent returning with gold around their waists was a great start for the titles.

WrestleMania 35 rolled around and the belts were to be defended in a Four Corners Tag Team Match. The teams consisted of The IIconics, The Boss N’ Hug Connection, The Divas of Doom, and Nia Jax and Tamina. This match was an okay spectacle, but nothing special. However, The IIconics managed to pick up the win, making them the new WWE Women’s Tag Team Champions.

This seemed like a good decision. The IIconics were a cohesive unit and felt like a team. Their heel act was brilliant at the time and it seemed like they were going to make the belts their own. This was the peak of the women’s tag team division and things have only gone downhill since. 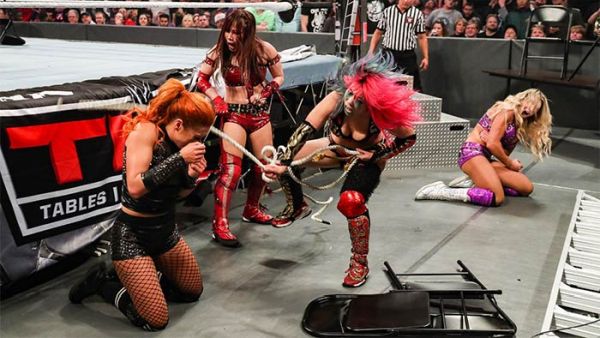 Following the reign of The IIconics, the WWE Women’s Tag Team Titles devolved into the realm of meaningless nonsense. Storytelling went out of the window in favor of random title matches. The Kabuki Warriors held the belts from October to the spring of 2020 and the only bit of substance came from a brief feud with Becky Lynch and Charlotte Flair. However, their match at WWE TLC wasn’t really about the titles. It was meant to further the feud between Lynch and Flair, with The Kabuki Warriors serving as fodder for the two heroes to overcome.

Bayley and Sasha Banks Hold All the Gold

The Boss ‘N’ Hug Connection reclaimed their gold in June of 2020 by defeating Alexa Bliss and Nikki Cross. The two original champions managed to elevate the belts again, using them to help further their own singles feuds. While this was an inventive idea, the WWE Women’s Tag Team Titles always felt like an afterthought. Again, this was designed to elevate a single feud, not the women’s tag division as a whole.

Nothing against either of these two athletes, as both are terrific in their own rights, capable of doing great things in WWE. With that said, their reign as WWE Women’s Tag Team Champions has been painful. There isn’t a single memorable match, storyline, or angle that can be taken from their 112-day reign.

WWE failed to establish any credible teams to take on this unit. Instead, they have put together various singles stars to make the division seem full. Teams such as Mandy Rose and Dana Brooke lack chemistry and aren’t convincing in the slightest. Naomi and Lana are the same. The only team with any kind of cohesion is The Riott Squad and they have been beaten again and again.

Baszler and Jax did lose the titles briefly to Asuka and Charlotte Flair. However, they regained them quickly on the Royal Rumble pre-show a week later. 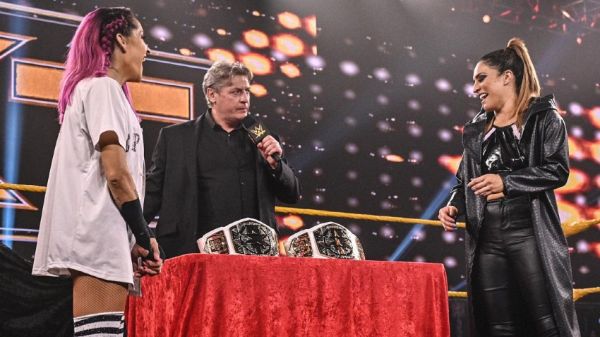 The Final Nail in the Coffin

WWE had already established the fact that the WWE Women’s Tag Team Titles were meant to be defended across both brands. Thus, why were new belts needed? The point of this would be to avoid the irreparable damage the main roster has caused to those titles. NXT treats its belts with respect and builds storylines and feuds around them. The main roster failed to do that, and having the belts on NXT would only muddy the water further.

Square Peg in a Round Hole

The main issue with the women’s tag team division is that it is actively hurting talent and their credibility. Both RAW and SmackDown are lacking in top stars for their women’s divisions. There are so many talented women who are being booked into the ground due to the WWE Women’s Tag Team Championships being around.

Mandy Rose, Naomi, Shayna Bazler, Nia Jax, Natalya, Lana – the list can go on and on, but really there is no solution to this problem. WWE made the mistake of introducing these belts without a coherent plan. This is the issue and it’s one that is hurting every brand’s women’s division.