Ice Ribbon’s Sendai Ribbon 2021 show from Sendai Pit features a small card with some huge matches. Among these matches are contests where the ICExInfinity and International Ribbon Tag Team Titles will be on the line. Let’s take a closer look at the action to come. 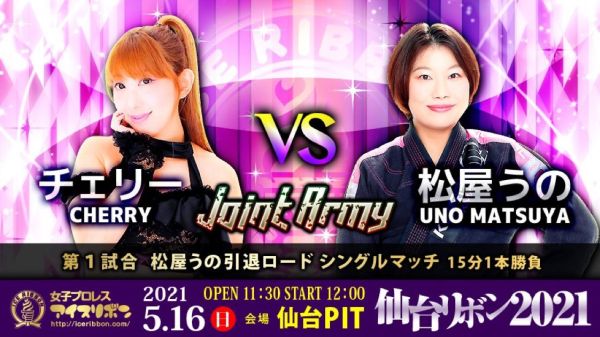 After only being in the wrestling business close to five years, the 37-year-old, Uno Matsuya announced her retirement from in-ring competition after she dropped the Triangle Ribbon Championship to Thekla. The first match on her retirement road is against her Joint Army teammate Cherry. These two have worked together throughout Matsuya’s career, so it makes sense that they will face off one last time. There is no doubt that this match will be heavy on the technical, showcasing the submission skills each woman possesses. 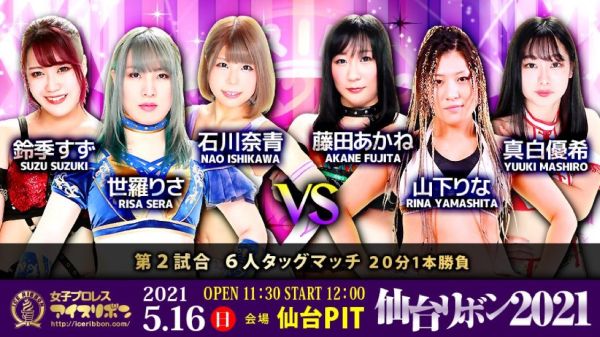 The Gacha Gang‘s back together again as Yuuki Mashiro returns from her injury she suffered during P’s Party last month. Rina Yamashita, Akane Fujita, and Yuuki Mashiro work surprisingly well together. They boast an interesting dynamic of two strong veterans alongside a somewhat clueless yet loveable rookie. On the opposite side of the ring, Nao Ishikawa has quickly gotten back into the motions after returning from her injury last month, showcasing some great work. As always, when the deathmatch duo Risa Sera and Suzu Suzuki team up, they show off their excellent chemistry. With Sera defending her FantastICE Championship soon, she needs to build more momentum. 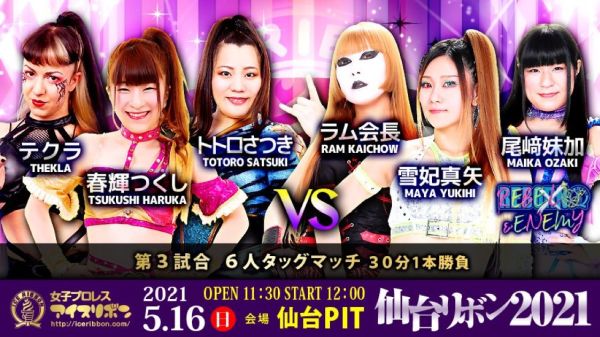 RebelxEnemy have been on a bit of a downward spiral since losing all the titles they had, but their win as a unit on the 9th might be a sign of things changing in their favor. However, that might be quite a tough task in this match. Thekla recently won the Triangle Ribbon Championship. Since then, Thekla has been heading upwards in the joshi scene at a fast pace. Her style of wrestling has clicked with everyone in Ice Ribbon, making for a nice addition to the roster. Tsukushi Haruka has been receiving many top opportunities in wrestling, whether competing for Ice Ribbon’s top title or making it to the finals of SEAdLINNG’s tag tournament. Haruka is one of the most consistent women on the roster. Their partner, Totoro Satsuki, isn’t one to forget about either, as she’s currently lined up for a shot at the ICExInfinity Championship in the future. To this point, she has been doing some great work with the best of them. This match could go either way but it’s going to great to see. 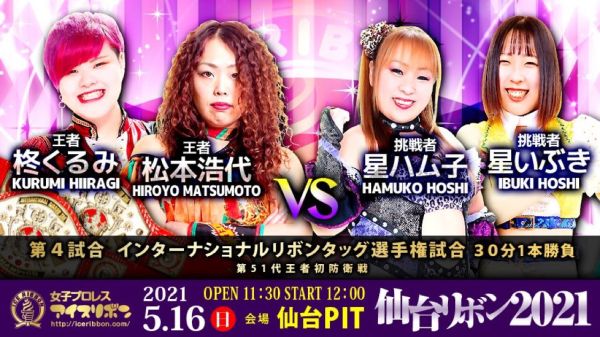 The International Ribbon Tag Team Champions, Kurumi Hiiragi and Hiroyo Matsumoto will be defending their titles for the first time at Sendai Ribbon 2021. Hamuko Hoshi and Ibuki Hoshi have teamed up successfully multiple times during their careers, even challenging for the titles on a few occasions. Thus, they certainly stand a chance going against the current titleholders. Hiiragi and Matsumoto have only teamed up one other time, during a six-person tag team match, which they won; this could very well have an effect on how they perform in the defence. With the likes of the women in this match, it will be a powerful affair with many strong moves. Hopefully, the champions will have a successful first defense.

The main event features the hometown girl, Mochi Miyagi, receiving a huge opportunity against the “Ace,” Tsukasa Fujimoto. Miyagi has been fighting for the FantastICE Championship since the belt’s inception. All the while, she’s been breaking away as a tag team wrestler, showing how well she can work solo. This match will mark the fourth defense for Fujimoto in her seventh reign. Throughout this reign, Fujimoto has put on arguably match-of-the-year standard performances every single time. If Fujimoto manages to pick up the win in this, she already has Totoro Satsuki and Tae Honma lined up. There is no doubt that Fujimoto and Miyagi are going to put on an excellent match at Sendai Ribbon 2021 that shouldn’t be missed.