A lot of unsubstantiated rumors have been circling recently about Cody Rhodes and his relationship with The Elite in AEW. Reports of backstage heat and the likes have made their way to the surface and for all we know, this is a complete work. However, looking at Cody and his influence in AEW, he does stand out. His storylines seem to take place in their own pocket universe in which he is the central character. He is the Guardians of the Galaxy to AEW’s MCU.

While this may be refreshing for some fans, it is hard not to look at the bigger picture. Cody built this company with The Elite, so to see him not be involved with any Kenny Omega segment on AEW Dynamite seems entirely out of place. Let’s take a look back at how we got here. 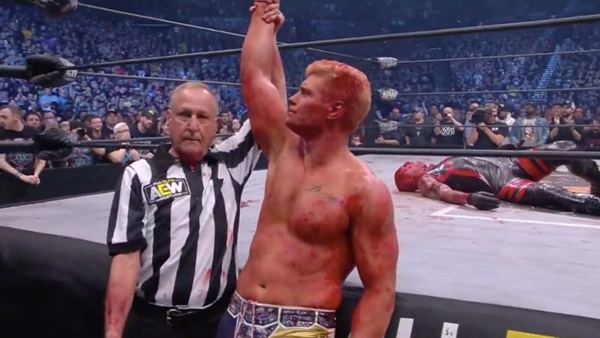 Starting at Double or Nothing, Cody made it very clear what he wanted to do in the company. He put on a Match Of The Year contender with his brother Dustin Rhodes and cemented himself as the top babyface in the company, more so than Kenny Omega, who had the main event spot. The Rhodes Brothers showed that they wanted to draw from the past and bring what they found into the present. The blood-filled match was a complete throwback to territory wrestling, the type of wrestling the Rhodes family knows very well.

Finding The Balance In AEW 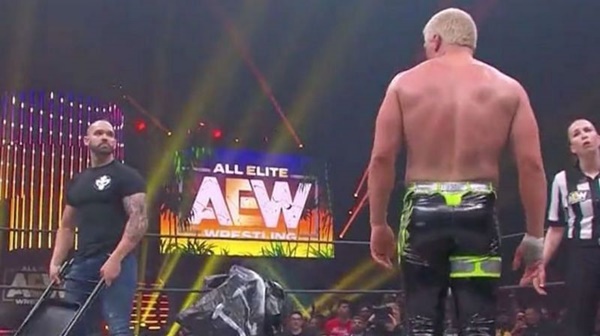 In the lead up to AEW’s first television episode. Cody had a few exhibition matches to set the stage. At Fyter Fest, Cody took on Darby Allin and at the following show he faced Shawn Spears. These excellent matches showed that Cody wanted to put over younger talent. While that worked in the case of Allin, it failed for Spears. This is where Cody’s devotion to putting over the new stars originated within AEW. Cody made Sammy Guevara look incredible on the first episode of Dynamite and from there he has been upping his game continuously. 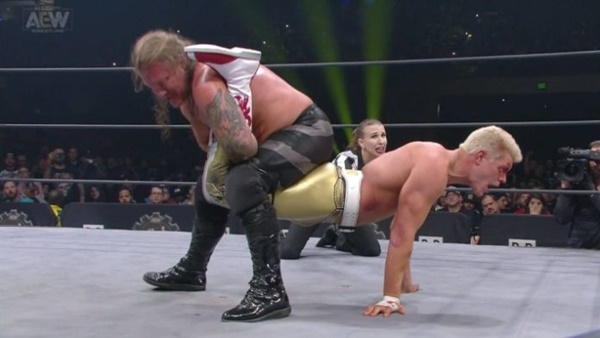 Looking back, Cody was the perfect first feud for Chris Jericho. This new version of the veteran needed the perfect babyface to play off against. Jericho was cutting some of the best promos of his career, showing why he was the inaugural AEW Champion. Cody wasn’t to be put to shame as his promos in the lead up to their match at Full Gear were spectacular. It was during this feud that Cody made the announcement that if he lost to Le Champion, he would never be in contention for the AEW World Championship.

This was an incredibly bold move at the time, but it put Cody in a position of vulnerability, making him an even more compelling babyface. While Cody was unsuccessful in his attempt to capture the gold, he slotted himself straight into another feud with his former protégé and friend MJF.

MJF Is The Perfect Villain For The American Nightmare 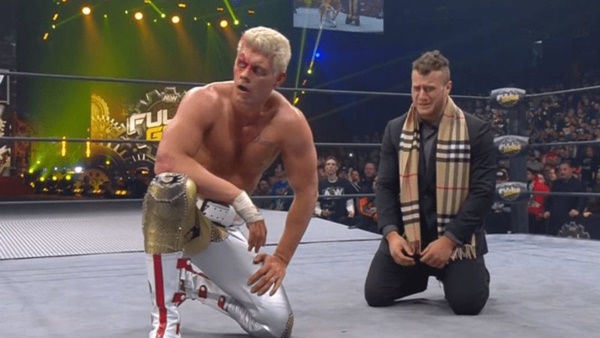 Every hero can be defined by their villains. Batman and The Joker, Superman and Lex Luthor, Sherlock Holmes and Moriarty. Each villain always brought out the best in their respective hero. This was also true of MJF and Cody. From the offset, MJF made his mark by cutting relentless promos about the Rhodes Family. From there, Cody would use some of his favorite comic book tropes to heighten this feud and make it must watch TV.

Cody used challenges to move the feud forward. Our hero had to endure three trials in order to gain his match with the villain. In a hellacious showing, Cody endured ten lashes from MJF, which were absolutely brutal and made for an incredible piece of wrestling storytelling. He then survived a steel cage match with MJF’s new protector Wardlow, which progressed the story further and made a star in the process. The final test meant that Cody could not lay a hand on MJF until the match. This final addition made the build even more tense, as our hero could break at any point.

The match took place at Revolution and was a stellar encounter. It was a hard-hitting affair that rightfully put over the younger talent. 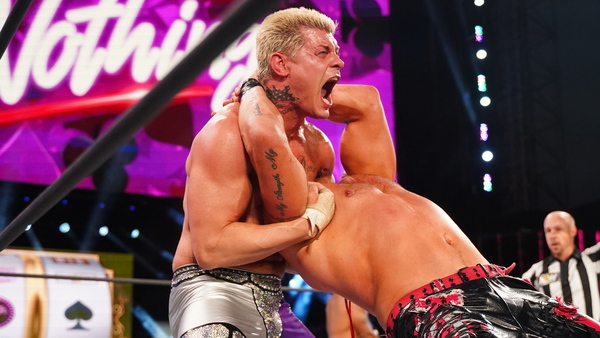 Again, Cody looked to put over some new talent with the introduction of the TNT Championship. Before the belt was even introduced, Cody entered into a feud with a debuting Lance Archer and Jake Roberts. While this feud was successful for the most part, it didn’t stick the landing. A messy match at Double Or Nothing 2020 led to The American Nightmare becoming the inaugural TNT Champion.

This suited Cody as it seemed he was relentlessly pursuing the idea that he can put over younger talent. Following his victory at Double Or Nothing, he began an open challenge. Inviting indie stars from across the country to come and take a shot at him. We saw the likes of Ricky Starks, “Warhorse” Eddie Kingston and more all step up to the plate.  This was a terrific way to get over new talent and mimicked John Cena‘s US Open challenge from 2015.

Mr Brodie Lee was a treasure. His performances on the mic and in the ring were second to none. Having him be the one to dethrone Cody was a perfect choice and it made Lee look like a credible title contender.  On the August 13th edition of Dynamite, Brodie Lee squashed The American Nightmare for the TNT Championship. This match told the story that Cody was getting out of touch and being too arrogant when it came to the belt. A simple story.

Cody was off TV for weeks while Lee reigned supreme over the division, effectively holding the belt hostage.  Cody eventually returned with new dark hair and a new swagger, appearing as a more brutal version of himself. As an audience we can see Cody’s love of comic books oozing through the screen. His parallels to Spider-Man here are uncanny.

His return set up a Dog Collar match for the October 7th edition of Dynamite. This match harkened back to the old, brutal WCW days. Cody eventually defeated Lee to regain the championship he lost through hubris.

After a brief rivalry with Orange Cassidy, Cody faced Darby Allin for the TNT Championship at Full Gear 2020. This was an excellent match with near falls everywhere, great transitions and eventually a roll up victor for Allin. This moment felt huge. In AEW, Darby Allin is presented as an underdog.  This was his crowning moment as Cody graciously took a knee and handed the belt over. Again, Cody put over another star. 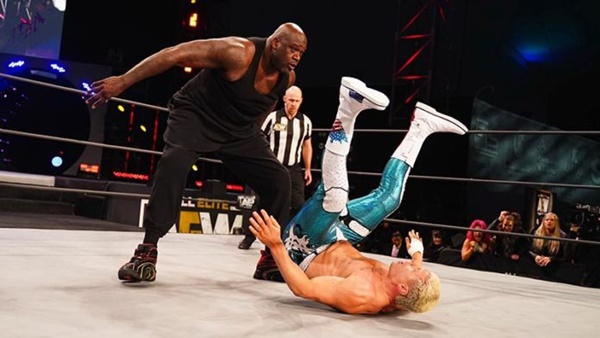 From Full Gear, Cody’s feuds have been a mess. His confrontation with Sting on the Winter Is Coming edition of Dynamite seemed to go nowhere. He was inserted into a match with Shaquille O’Neil that also went nowhere and was mainly a vehicle to get Jade Cargill over. He was slotted into the Face of the Revolution Ladder match which again…went nowhere.

The only piece of substantial story that Cody had from Full Gear until March was a brief snippet feud with Penta El Zero Miedo. This angle had so much potential, but everything quickly dropped. 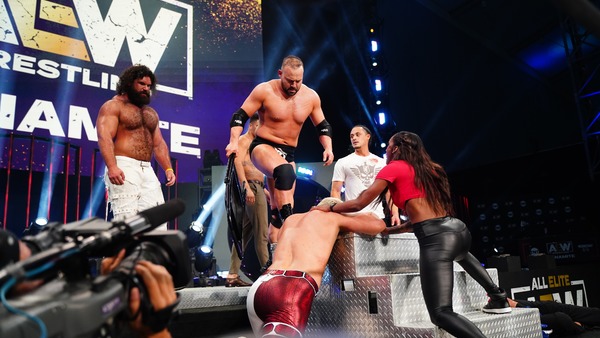 Things took a turn when QT Marshall took a turn. Turning heel on Cody, Marshall revealed that he had developed a fringe group from The Nightmare Family. This group consisted of Anthony Ogogo, Aaron Solow and Nick Comoroto. This new group laid waste to Cody and The Nightmare Family on the March 31st edition of AEW Dynamite. The angle was awesome and made everyone in the faction look out of this world good.

Cody eventually got his win over QT Marshall at Blood & Guts on May 5th, but this match seems like a stepping stone to Anthony Ogogo, possibly at Double Or Nothing.

“Wrestling Has More Than One Royal Family.”

Throughout his AEW career, Cody has shown he is willing to put over new talent. His matches with Darby Allin, Ricky Starks and Lance Archer all prove that this is his goal. Cody’s run has been tremendous. His promos and matches have been next level.

While he may be one of the best wrestlers on the planet, Cody just needs to focus. His storylines recently haven’t hit the mark. He just needs to find himself a good, meaty angle (like the Nightmare Factory) and focus on the slow build.

There’s a reason Cody is front and center on most AEW PPV’s. It’s because he is one of the best wrestlers the company has to offer.