If you have read this website before, you understand that Roman Reigns is on the run of his career as “The Tribal Chief” and Universal Champion. It seems as though that everything he touches with his golden hand simply becomes gold. As he prepares for his match with Cesaro, there is a chance that his next story is already being built as well. On Friday Night SmackDown, Jimmy Uso made his return to WWE after rehabilitating his injury for a year. And his response to Reigns welcoming him into the family instantly opened a pathway for the future. Whether it be against him or acknowledging him, the return of Jimmy Uso adds a whole new layer to the story of Reigns.

Perhaps the brilliance of the storytelling on SmackDown shined through brighter than it has in months on Friday night. The last time we had seen Jimmy Uso on WWE television, he attempted to save his brother from the beatdown that Reigns was giving him inside Hell in a Cell. It was there that Reigns applied the Guillotine to Jimmy, forcing Jey Uso to finally quit and acknowledge Reigns as “The Head of the Table.” Since that moment, Jey has become the “Right Hand Man” to Reigns as he falls in line. So when Jimmy returned on Friday, they could have easily done that with him as well. But rather, Jimmy held off. He showed an immense amount of uncertainty when it came to siding with his brother and cousin, something that signified long-term booking that has continued to aid the story of Roman Reigns as “Tribal Chief.” 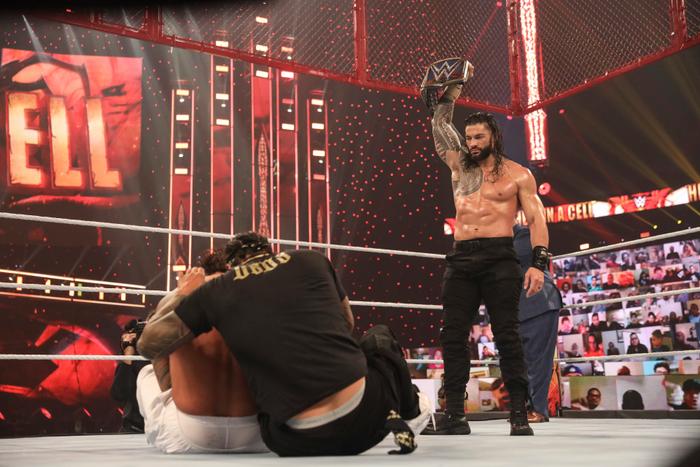 In the past, WWE would have been willing to simply lump in Jimmy with Reigns with no problem, which it looked like they would be doing, but the hesitation throughout the night before the final segment proved to be a story perfectly told. At the beginning of the show, all was well. But during the Seth Rollins and Cesaro match, Jimmy was willing to think about no one else but his brother by superkicking Rollins after he got in the face of Jey. This helped allow Cesaro to win the match and secure a title match at WrestleMania Backlash. Rollins, reasonably sizzling with anger, got in the face of his former Shield brother to tell him to take care of his cousins or Rollins would.

Later in the show, Jimmy talked to Jey about how without his brother, Reigns would not be Universal Champion. Jimmy was trying to convince his brother to let Reigns fight his own battles so that they could chase championship gold together once again, but Jey was clearly hesitant. This would continue throughout the night as Reigns told Jey to try and get Jimmy on their side or he was going to be left out of the family as Jey once was. To end the night, Jimmy made it clear that he was not feeling what they were threatening and walked out on his family. Reigns threatened to make Jey the one and only Uso, leaving Jimmy in the dust. Once Cesaro attacked, Jimmy attempted to hold Jey back from running back but that failed.

Cesaro laid out Jey, leading to Jimmy’s involvement and being put down as well. It showed that while conflicted with the Reigns side of things, Jimmy could not let his brother get hurt all night long. There’s a reason for this and why it’s so incredibly important for Reigns, Jey, Jimmy, and SmackDown moving forward, as the story is of the most intensity and will only be building moving forward. This is only the beginning of what could mirror the same story that got Jey on the side of Reigns.

What is Next For in This Story Between Jimmy Uso, Roman Reigns, and Jey Uso 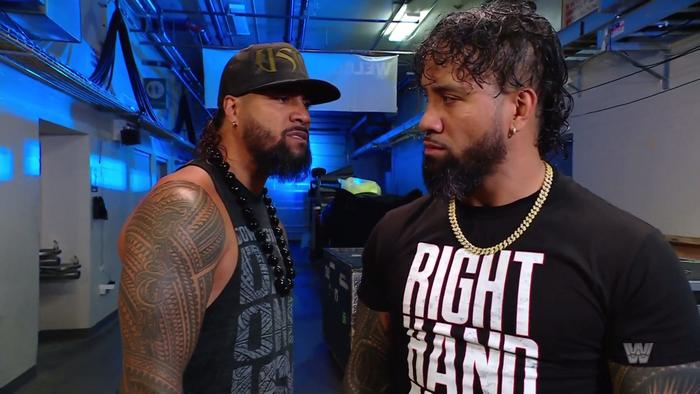 Does Jimmy Uso ultimately join his cousin’s side and stand in line next to his brother? That is the question that everybody is asking right now. And while it feels like a likely result of this story, it won’t happen soon. Jimmy’s first night back had major implications on Reigns, from him having to face Cesaro at WrestleMania Backlash to Seth Rollins being down his back now. There’s a lot going on and “The Tribal Chief” isn’t going to take it lightly. Win or lose at WrestleMania Backlash, Reigns is going to have his eye on Jimmy moving forward with a potential match to come. But there may be a retreat of sorts, forcing Jey to be the man who steps up to Jimmy first if he is “The Right Hand Man.” That is intriguing in itself.

Ultimately, that may be what decides Jimmy’s future after all. Fighting his brother is something he visibly does not ever even want to consider. Yet, the possibility becomes more real if you think about it with Reigns occupied with Cesaro. Then there is the possibility that Rollins is the man who takes on either Uso, maybe bringing Jimmy closer to Reigns. That is the beauty of this story. And then there’s the chance that Jimmy, like his brother before him, takes on Reigns in a match as “The Tribal Chief” forces Jimmy to acknowledge him. All of these possibilities are on the table, furthering the story of Reigns past what he is dealing with in his feud with Cesaro.

If we had to take a guess, Jimmy will eventually be falling in line behind Reigns and will be holding SmackDown Tag Team Championship gold with his brother once again. Fans should be grabbing a bucket of popcorn to sit back and watch this story unfold, as it should be one of the best in all of WWE — as Reigns has been for months now.